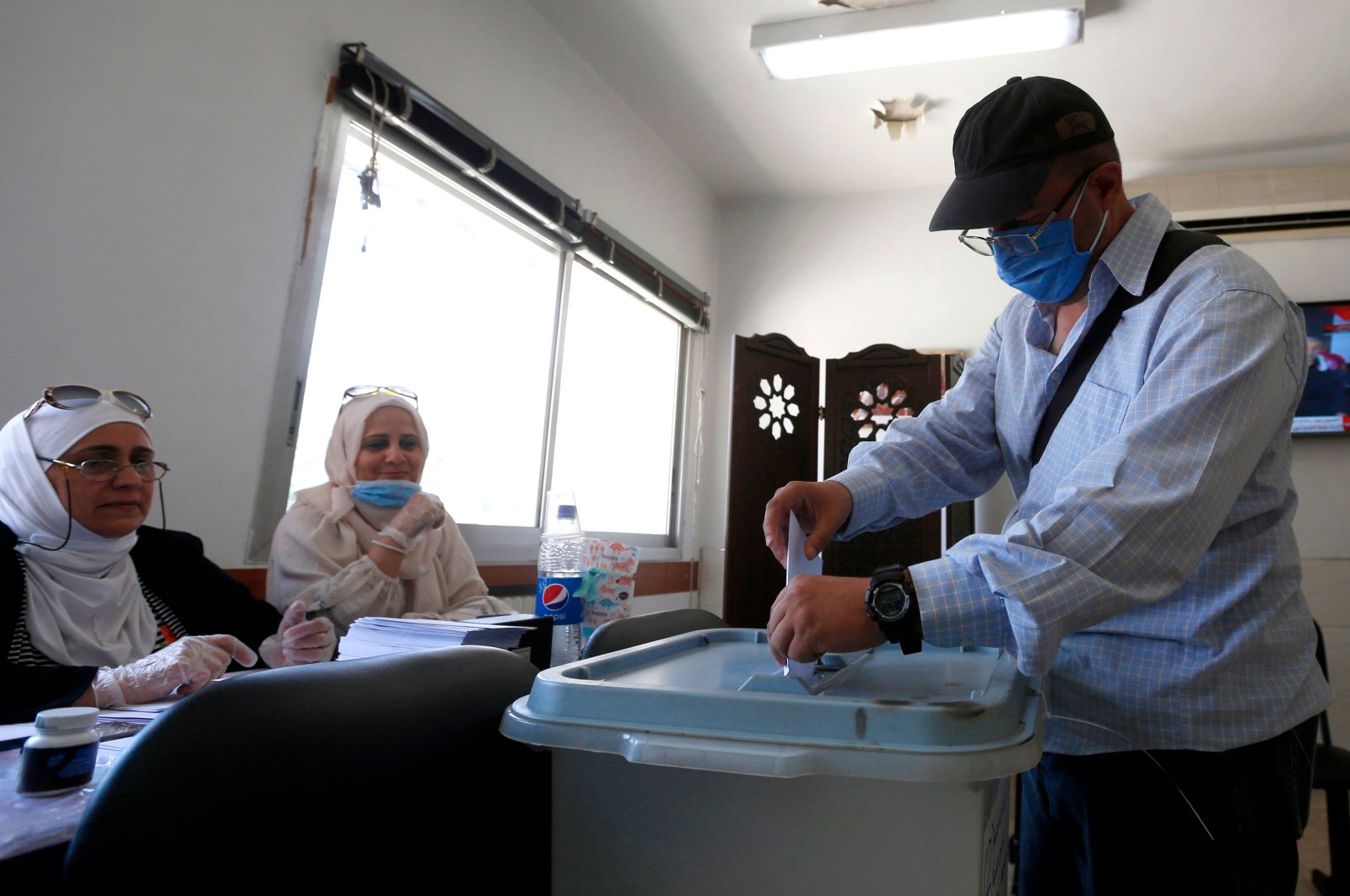 A man casts his ballot at a voting station during the parliamentary elections in Syria, Damascus, July 19, 2020. (AFP Photo)
by DAILY SABAH WITH AGENCIES Jul 19, 2020 2:18 pm
Edited By Şeyma Nazlı Gürbüz
RECOMMENDED

Syrians headed to polling stations in regime-held parts of the war-torn country yesterday to elect a new parliament amid strict health measures to prevent the spread of the coronavirus. The one-day vote has been postponed twice since April due to the global coronavirus pandemic, which has officially infected 496 people and killed 25 in regime-held areas while pundits claim the actual numbers are likely to be far higher.
The polls opened at 7 a.m. (4 a.m. GMT) and will continue for 12 hours in the government-controlled areas, an election commission said.
The vote is the third to take place in Syria since the conflict began in March 2011. It has killed more than 400,000, displaced half the country’s population and forced more than 5 million refugees to flee mostly to neighboring countries.
The head of the Higher Judicial Committee for the Elections, Judge Samer Zumriq, confirmed on Saturday in a statement to state news agency SANA that more than 7,400 polling stations have been set up in 15 voting districts. They include 1,400 stations where troops and members of the country’s security services will vote.
The Syrian regime has conducted coronavirus tests only in Damascus’ central lab, making it hard to track infections. For instance, the areas under the control of the YPG/PKK – home to 4 million people – have had to send test samples by plane to the capital.
The Syrian Observatory for Human Rights (SOHR), a Britain-based war monitor, also said back in March that doctors had received threats from the regime not to disclose the number of COVID-19 cases. “Doctors have been instructed to refer to cases that are suspected to be corona infections as severe pneumonia,” said the SOHR director, Rami Abdulrahman.
The vote is also being held in areas where the government has partial control, such as Idlib in Syria’s northwest and al-Raqqa in the north.
On Saturday, YPG/PKK terrorists running a self-ruled region in northern Syria said it would not allow the parliamentary polls to take place in areas under its control.
So far, there has been no reaction from Bashar Assad’s government.
Some 1,656 candidates, including 200 women, are standing for the 250-member parliament, Syria’s state news agency SANA reported.
Most contenders belong to the ruling Baath Party and loyal groups.
The elections are being held two days after Assad marked his 20th anniversary of being in power after succeeding his father, Hafez, who died in 2000. Official results are expected by Tuesday. Assad’s Baath Party and its allies are anticipated winning the majority of parliament seats, elected for a four-year mandate.
Some 167 seats are allocated for Assad’s ruling Arab Socialist Baath Party – guaranteeing it a solid majority – while the rest are allocated for independents, including merchants, business people and industrialists.
“We hope that the members of the new council would work to improve the living conditions of citizens by enacting new legislation,” said Samir Sulaiman, a 50-year-old employee.
This year’s vote comes as the country is also witnessing harsh economic conditions including a crash in the local currency worsened by U.S. sanctions and an economic crisis in neighboring Lebanon.
The Caesar Syria Civilian Protection Act seeks to impose sanctions on Syrian troops and others responsible for atrocities committed during Syria’s civil war and also provides funding for war crimes investigations and prosecutions.
Syrian regime calls the legislation, acts of “economic terrorism.”
Outgoing legislator Mohannad Haj Ali, who is under U.S. and European sanctions, said the country is experiencing a “suffocating economic and political siege.” He also said Syrian citizens are aware of corruption within state institutions adding that Assad has started “dealing with corruption by tracking down on the corrupt.”
Haj Ali did not give any names but his comments came after Assad’s maternal cousin Rami Makhlouf, who was once described as central to Syria’s economy, has been pleading for Assad to help prevent the collapse of his business.