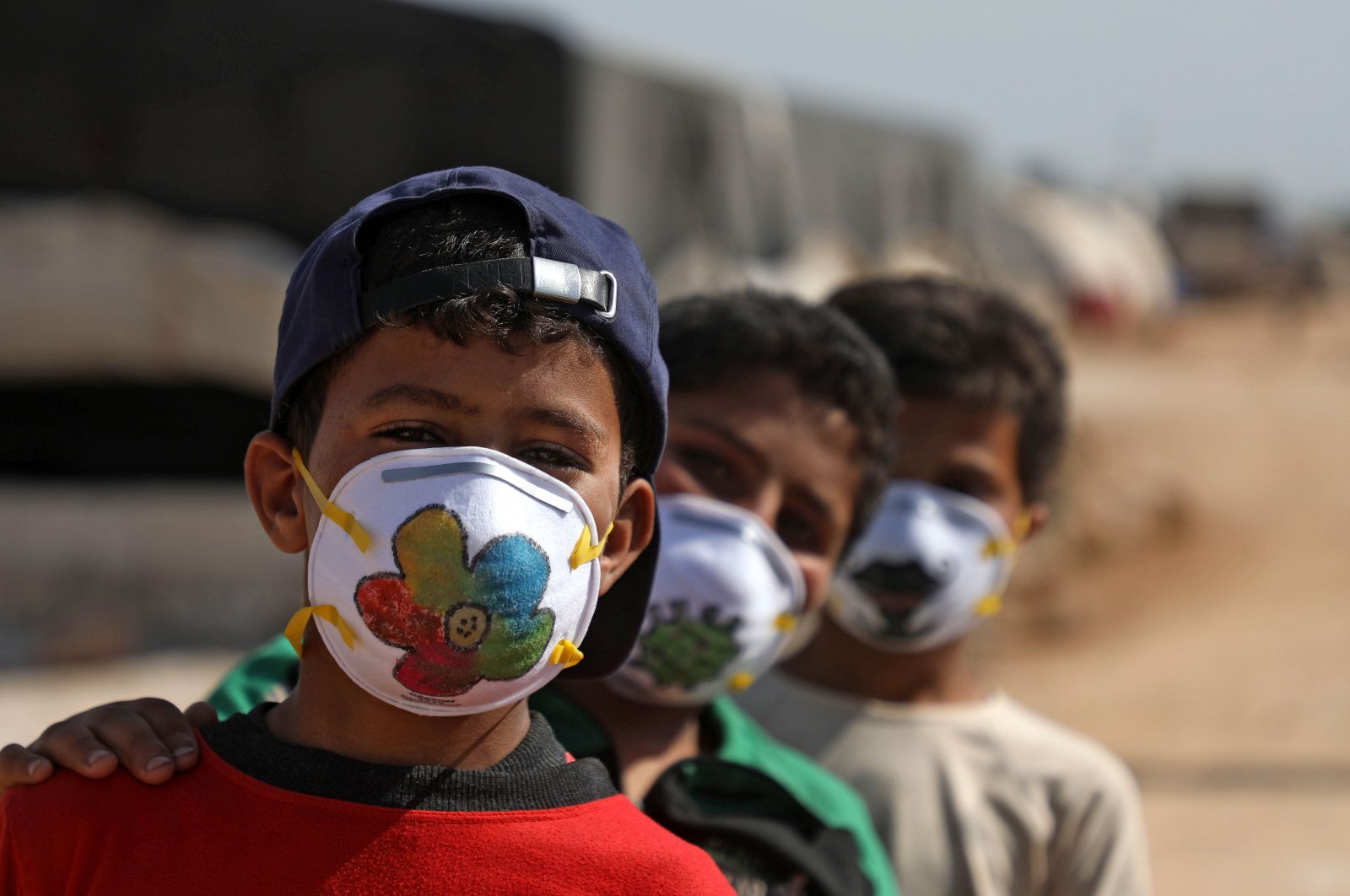 Displaced Syrian boys pose while wearing face masks decorated by artists during a COVID-19 awareness campaign at the Bardaqli camp in the town of Dana in Syria's northwestern Idlib province, on April 20, 2020. (AFP)
by Daily Sabah with Reuters Apr 24, 2020 10:32 am
RECOMMENDED

A team of volunteers in northwestern Syria have cobbled together prototypes of a ventilator and a testing machine – homemade equipment to fight the coronavirus if it hits the last opposition stronghold, Idlib, where hospitals lie in ruins after nine years of war.

The group of 12, mainly technicians and engineers, hope to build hundreds of makeshift machines to combat the pandemic in Idlib, where the Bashar Assad regime's attacks made nearly 1 million people homeless this year.

"If coronavirus cases start to surface here, it will spread widely," said Ayoub Abdul-Karim, a 20-year-old graduate who specialized in medical equipment. "We're working on this today because there won't be enough machines. We suffer in the hospitals from a big lack of ventilators," he added.

His homemade ventilator is assembled inside a brown wooden box, with white plastic hoses sticking out to help the patient breathe.

Doctors worry that people in overcrowded camps would be impossible to protect if an outbreak hits the area. The region, home to 3 million people, many of whom fled other parts of Syria, has no confirmed cases so far, but little testing has been done. There is only one machine to run a polymerase chain reaction (PCR) test to detect the virus.

The volunteers have so far tried out their prototype ventilator at a hospital and have the green light from local doctors. They hope to get funding or equipment from aid agencies in the northwest and across the border in Turkey to produce hundreds of the breathing machines – critical to keeping COVID-19 patients alive.

As the fight against the coronavirus continues all around the world, vulnerable groups, particularly refugees, face greater risk due to the dire conditions in camps, making them potential hot spots for a pandemic. Displaced Syrians top the list of these vulnerable groups due to their large number and the country's collapsed infrastructure and health care system.

"There are very few ventilators, much less than the need if the coronavirus spreads, and this had us very worried," said Yamen Abu al-Walid, 37, who helped set up the team to bring together the expertise and try to meet the region's needs.

"The infrastructure is destroyed. We risk having many deaths if the disease strikes if there's no preparation," he added.

Despite only a small number of confirmed cases, the virus is likely more widespread than first thought, owing to low testing capacity and lack of transparency.

The Syrian Observatory, a Britain-based war monitor, previously said doctors had received threats from the regime not to disclose cases. "Doctors have been instructed to refer to cases that are suspected to be corona infections as severe pneumonia," said its director Rami Abdulrahman.

Syria's damaged health infrastructure and massive displacement of citizens as a result of attacks by the Assad regime and Russia make potential containment measures a nearly impossible task.

The first COVID-19 test kits were sent to northwestern Syria by Turkey, the U.N. and the World Health Organization (WHO) on March 26.

Testing began "after a shipment of 300 kits reached a member of the WHO health cluster. The first four tests came back negative," the U.N. agency said in a statement last month.

"Some 600 additional tests will reach the laboratory in Idlib tomorrow on March 26, and a shipment of 5,000 tests is scheduled to arrive in Idlib next week," it added.

The cease-fire in northwestern Syria's Idlib was reached in Moscow last month after talks to contain the escalating conflict. The meeting came after regime forces attacked Turkish soldiers and civilians on the ground, causing Turkey to launch a renewed operation in Syria. The cease-fire deal came amid recent clashes between the Turkish military and Syrian regime forces that left many dead on both sides.