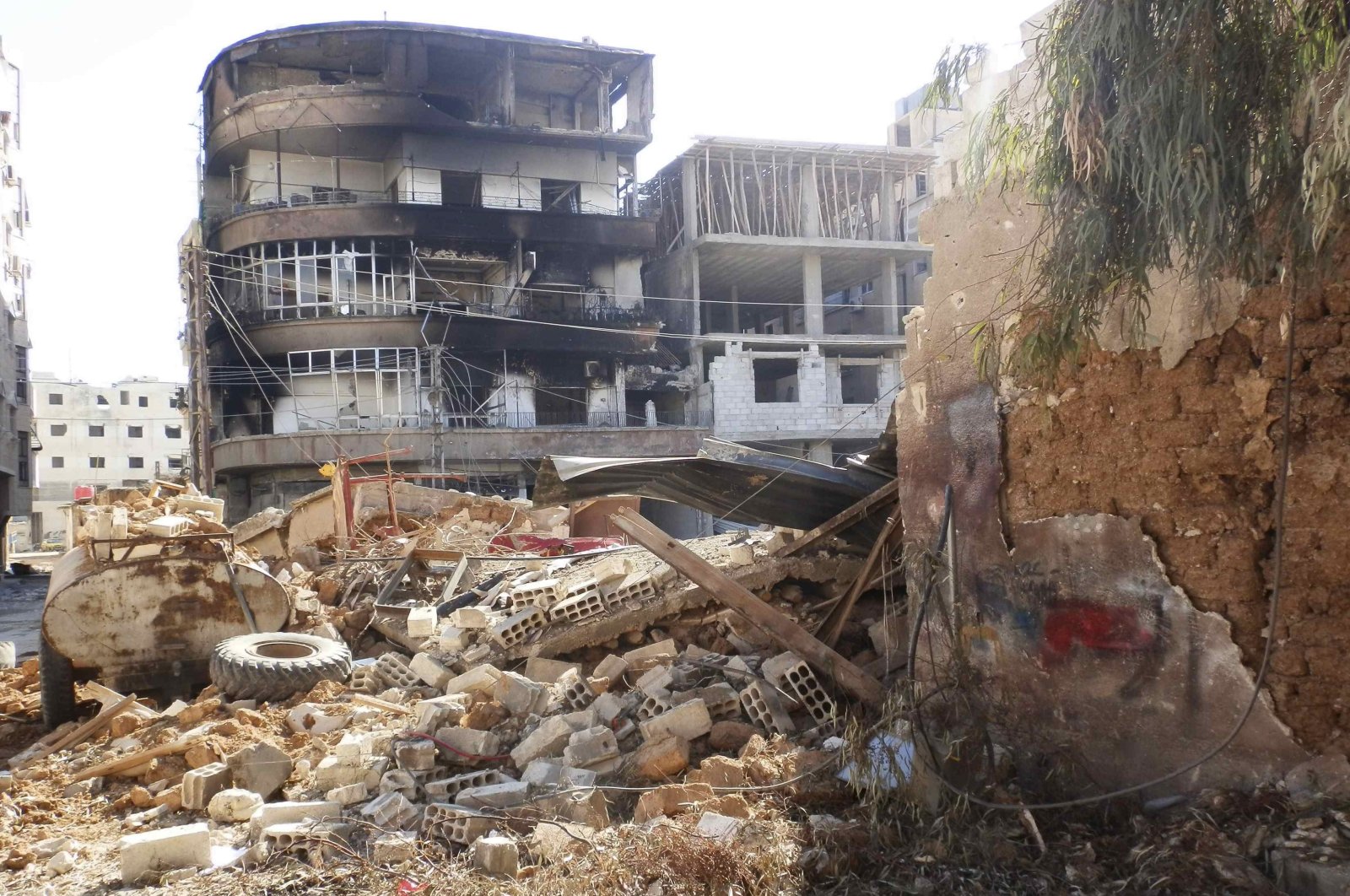 Many buildings were damaged or reduced to rubble after what activists say was shelling by forces loyal to Bashar Assad in Daraya, Syria, Feb. 4, 2013. (REUTERS Photo)
by DAILY SABAH Aug 24, 2020 1:11 pm
Edited By Şeyma Nazlı Gürbüz
RECOMMENDED

On the eighth anniversary of the Daraya massacre on the outskirts of the capital Damascus that cost the lives of more than 500 civilians, Syrians recall the atrocities committed by the Bashar Assad regime.

While the incident was described as an “appalling and brutal crime” by the United Nations, days after the attack, Assad called the killing in Daraya a legitimate operation, saying it cleansed the area of "terrorists."

According to Human Rights Watch (HRW), however, which interviewed Daraya residents and analyzed satellite images of the battle, evidence points toward regime responsibility for the killings after the town was shelled and bombed by helicopters.

The Syrian Network for Human Rights (SNHR) on Sunday released a document that includes interviews of witnesses of the massacre.

On Aug. 20, 2012, the second day of Ramadan Bayram, also known as Eid al-Fitr, when Muslims around the world were celebrating, Assad's forces began their military campaign, cutting off power and all means of communication, pushing the whole city into darkness. When the regime launched its bombings, a number of houses were destroyed and many people were wounded as the bombardment forced residents of the Fashoukh area to flee to the middle of the city, the SNHR stated.

The rights group said that over the next day, Syrian forces blocked all main and secondary entrances into the city with military checkpoints. In addition, 30 tanks spread across the international road leading to Daraa and near Sahnaya bridge, “impeded anyone from coming in or out of the city. This was in synchronization with a bombing by the Syrian army in the middle of the city of Daraya, which resulted in a number of injuries.”

The SNHR also pointed out that it was not able to document military victims due to the regime’s unwillingness to grant the right's group any license to operate within the nation, even though most of the members are Syrians who live inside the country.

“The climax was on the morning of Aug. 22, 2012 at 7:00 in the morning as the Syrian regime escalated its bombing and used all kinds of heavy weaponry such as tanks shells and mortar shells in addition to helicopter missiles in an unimaginable attack that disregards any norms or rules of war and oversteps any humanitarian considerations,” the report said, adding that the bombardment resulted in widespread destruction as well as deaths and injuries.

Almost a decade later, the Syrian regime continues to oppress its own people. For years, the Assad regime has ignored the needs and safety of citizens, only eyeing further gains of territory and crushing its opposition. With this goal, his forces have bombed vital facilities like schools, hospitals and residential areas, causing the displacement of almost half of the country’s population.