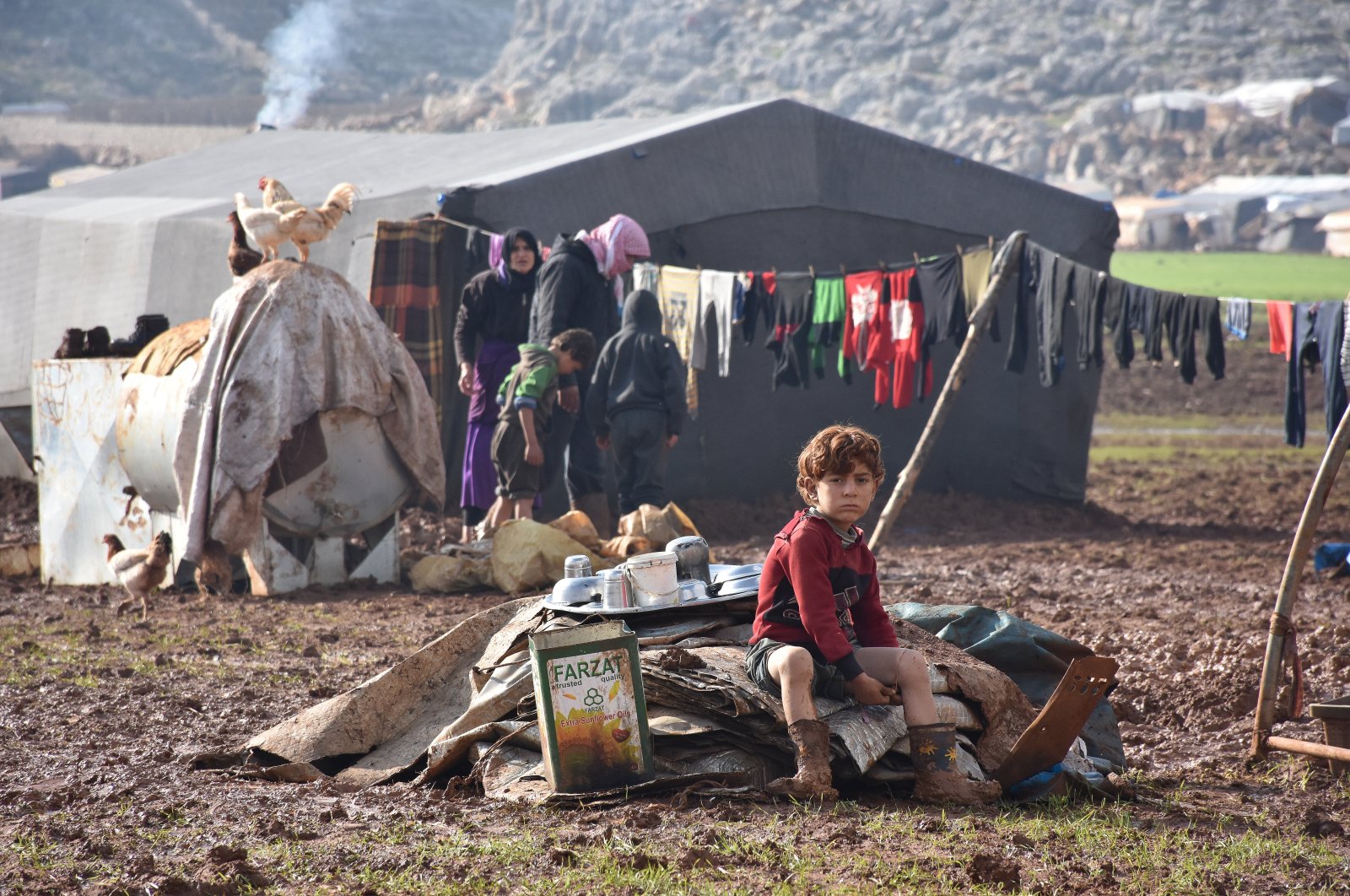 Civilians who fled the Assad regime in Idlib try to survive amid mud and cold living in tents in areas near the Turkish border, Jan. 5, 2020. (AA Photo)
by Dilara Aslan Mar 26, 2020 1:38 pm
Edited By Dilara Aslan

The Syrian people are struggling to eke out a normal existence amid the threat of the Assad regime, YPG terrorists and now the advent of a coronavirus outbreak

As the whole world has the coronavirus on its agenda these days, Syria, a country deprived of nearly every type of infrastructure and institution, remains a grim picture as the Syrian people continue to suffer from assaults from two sides: the YPG terrorist organization, and the Bashar Assad regime.

With the Assad regime controlling almost the whole country and YPG controlling other parts in the northeast, northwestern Idlib province, also declared a de-escalation zone by Turkey and Russia in 2018, was seen as the last shelter for millions of people. The population of the province had gradually increased with many people running from regime attacks and terrorist torture. However, when the Assad regime launched an offensive last December to take back the last opposition bastion, people were once again left with nowhere to go. The bombardments and shelling of the Russian-backed regime caused nearly 1 million people to flee and created a renewed humanitarian tragedy. Upon the escalation of violence in northwest Syria, Turkey brokered a cease-fire with Russia; however, the truce seems to be on thin ice.

“Regardless of the last cease-fire agreed between Turkey and Russia, which went into force on March 6, the Syrian regime forces continued to bomb the area by the artillery,” Fadel Abdul Ghany, the founder and chairman of the Syrian Network for Human Rights (SNHR), told Daily Sabah.

“On the humanitarian front, we have recorded a slight movement of reverse displacement as civilians headed toward their homes, mostly by civilians who were unable to find suitable shelter elsewhere,” Ghany stated, adding that “civilians in general, and IDPs especially, in this region suffer from the deteriorating conditions of life and shortages of essential needs, as poverty and unemployment spread.”

The camps in northwest Syria are densely populated, and there is insufficient relief reaching them, while the health and education sectors struggle to provide the required services, he explains.

Even though nongovernmental organizations, the United Nations and Turkish institutions and relief organizations struggle to meet the needs of the many civilians in the war-torn country, in the face of the new coronavirus threat, aid is insufficient. In a situation where even the most developed and modern countries are desperate in the fight against the coronavirus, it is hard to expect a country with almost no standing hospital and where children cannot find water to wash their hands to cope with the threat.

“In light of the spread of COVID-19 in the world, civilians are afraid of the illness spreading as there is an inability to follow the precautionary guidelines as the area is overcrowded, especially in camps and shelters, and it is very difficult to take quarantine measures there,” Ghany said. He pointed out that “camps also struggle with a lack of public facilities (showers and toilets), and they are all shared facilities. There is also a shortage of water and personal hygiene materials to use as precautionary measures.”

In a country where only 50% of health facilities are functioning, an outbreak could have catastrophic consequences.

Apart from the coronavirus and the Assad regime, the YPG poses another threat.

Indicating that people living under the YPG-dominated Syrian Democratic Forces (SDF) face threats and mistreatment, Ghany stated: “There is no medical care, or transparency when it comes to revealing cases of the COVID-19 pandemic, and what is more dangerous is the fact that the SDF hasn’t released thousands of detainees in its prisons, although the detention centers are overcrowded, lack appropriate hygiene and medical care.”

According to SNHR data, 146,825 individuals are still detained or have forcibly disappeared at the hands of the main perpetrator parties in Syria, including the Syrian regime, Daesh, the YPG and other terrorist organizations since 2011. Reportedly, the detainee is tortured from the very first moment of his or her arrest and denied any opportunity to contact his or her family or to have access to a lawyer.

“The SDF abuse the resources from the oil in the northeast of Syria for its leaders and don’t spend it on infrastructure projects and don’t publish any information on where the profits of the natural resources are spent. There is high-scale corruption and theft of the public’s money, and that is reflected in the dreadful services, specifically the medical ones,” Ghany elaborated.

According to an analysis in September by the Foundation for Political, Economic and Social Research (SETA), three-quarters of Syria’s natural resources have fallen in the hands of the PKK’s Syrian offshoot the YPG. The YPG controls an area of about 50,000 square kilometers (310,685 square miles), making 30% of the country. The YPG controls 50% of irrigable land, 70% of energy resources and 95% of water potential, the report stated.