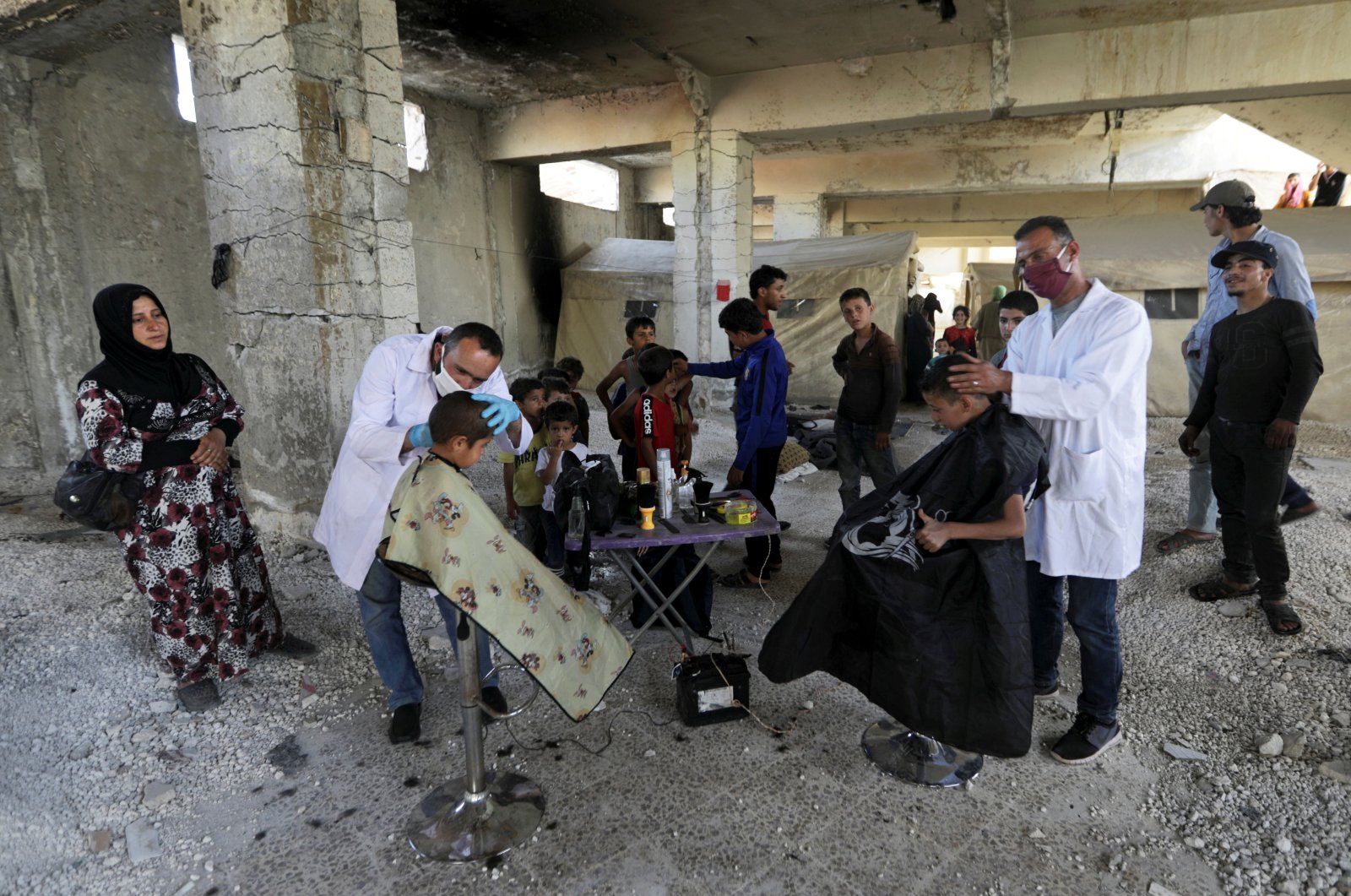 Volunteer hairdressers from the International Association for Relief and Development (ONSUR) wearing face masks and gloves cut the hair of internally displaced children at a camp for the displaced in Idlib, Syria, May 19, 2020. (Reuters Photo)
by Daily Sabah with Reuters May 21, 2020 11:18 am
RECOMMENDED

At a football stadium in northwestern Syria's Idlib, repurposed as a shelter for people displaced by war, children are being offered a service highly sought after since the coronavirus pandemic set in: a haircut.

The camp is one of several in Syria's war-torn northwestern region where makeshift barbers are being set up by the International Association for Relief and Development (ONSUR), part of a project to bring relief to children during Ramadan Bayram, also know as Eid al-Fitr, the holiday that marks the end of Ramadan.

"Today we came to the camp to give children haircuts ahead of the Eid holiday in order to bring their hearts joy and to prevent crowds from gathering at barbershops," said Abdul Wahab al-Daif, a 33-year-old barber.

The opposition-held northwest, home to more than 3 million people, has not had a confirmed case of the coronavirus, but doctors fear its shattered medical infrastructure and overflowing camps could quickly turn any outbreak into a humanitarian disaster.

To minimize the risk of contagion, ONSUR's barbers are operating in individual tents or setting up designated haircut areas to help maintain social distancing.

"No matter how much you try to separate people in the camps, it's almost impossible, but we're doing our best to serve people and protect them from disease," said Muhammad Najjar, ONSUR's Idlib director.

The group is also distributing masks and educational brochures for children on how to prevent the spread of the coronavirus as well as offering psychological support.

As the fight against the pandemic continues around the world, vulnerable groups, particularly refugees, face greater risk due to the dire conditions at camps, making them potential hot spots for outbreaks. Displaced Syrians top the list of these vulnerable groups due to their large number and the country's collapsed infrastructure and health care system.

The United Nations, several humanitarian groups and Turkey have been trying to address the needs of the people, yet efforts remain insufficient and lack wider international attention.

The population of the province had gradually increased with many people running from regime attacks and terrorist torture. However, the displacement of civilians has intensified since mid-December when the Russian-backed Assad regime started a new assault to seize the last opposition bastion.

It is estimated that over 1 million Syrians have moved near the Turkish border due to intense attacks over the last year, while half of this number was displaced after November 2019. After heightened tensions, Russia and Turkey in March reached an agreement to halt violence and the flow of displacement.

In Syria's northwest, some 3 million people are trapped in a shrinking opposition stronghold battered by months of bombardment, especially in Idlib. Hundreds of thousands of people are already in overcrowded settlements teeming with fresh arrivals, and many of the displaced are forced to sleep in freezing temperatures in open spaces.

The camps in northwest Syria are densely populated. There is insufficient relief reaching them, and the health and education sectors struggle to provide the required services.