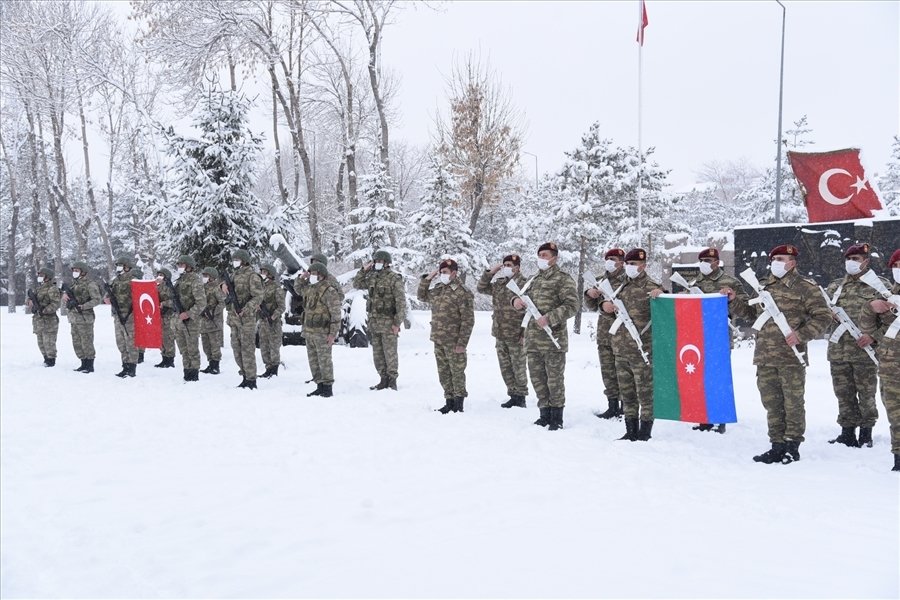 Turkish and Azerbaijani soldiers stand in a field before the start of the joint winter drills in eastern Kars province, Turkey, Jan. 17, 2020. (AA Photo)
by Daily Sabah with IHA Jan 17, 2021 2:33 pm
RECOMMENDED

The Turkish Armed Forces (TSK) are preparing for the most comprehensive winter drill in recent years, the military said in a statement on Sunday.

According to the statement, the Azerbaijani Armed Forces will also attend the drills that will take place in Turkey’s eastern Kars province. The drill is expected to feature domestically-produced weaponry and equipment.

Tank divisions, cannonries, sniper teams, personnel of the Special Forces Command, helicopters and commandos will also participate in the drill.

The Winter 2021 Drill will take place between Feb. 1 and Feb. 12, and will also feature domestically developed weaponry and equipment.

According to the report, the drill will mostly focus on operational capabilities during the harsh weather conditions of winter months, including practices of sheltering, reinforcement, maintenance and educational development.

Ground and air assaults, airdrops, airborne operations and logistic support will be practiced by both militaries.

Ankara and Baku, with the participation of the countries' air and ground forces, launched joint military drills last year in the wake of Armenian attacks on Azerbaijani border points.

The war exercises began on July 29, with Aug. 5 being the last day of ground engagements – which included artillery, armored vehicles and mortars striking simulated targets – in the capital Baku and the exclave of Nakhchivan, Azerbaijan's autonomous region bordering Turkey.

Turkey heavily put its support behind Azerbaijan, whose Nagorno-Karabakh region remained under illegal Armenian occupation until recently, with international organizations, including the United Nations, demanding the withdrawal of occupational forces.