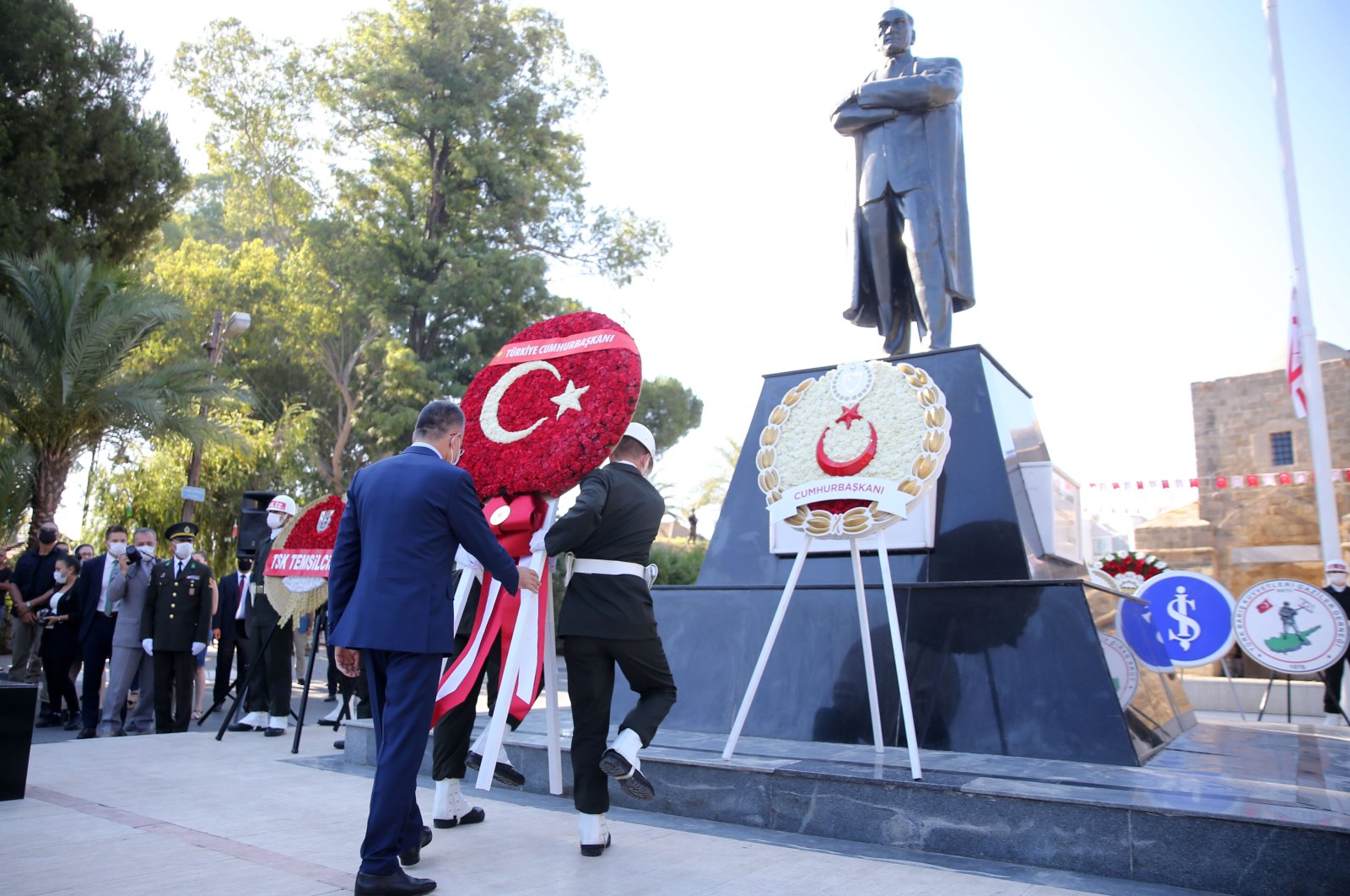 On the 46th anniversary of the Cyprus Peace Operation, Turkey reiterated its determination to protect the rights of Turkish Cypriots, calling for an equal, permanent solution for both communities on the divided island

Turkey marked the 46th anniversary of its Cyprus Peace Operation Monday, reiterating the country's desire for a fair and permanent solution to the Cyprus issue with the acceptance of equal status for Turkish Cypriots.

“Greek Cypriots must acknowledge the political equality of Turkish Cypriots and their equal rights over the island's natural resources without delay,” President Recep Tayyip Erdoğan said in a written statement on Monday. “A fair and permanent solution on Cyprus is only possible with the acceptance of equal status for Turkish Cypriots.”

The president congratulated Turkish Cypriots on the occasion, "which ultimately eliminated the attempt to harm the rights, freedom and existence of Turkish Cypriots, the co-owners of the island."

"This operation has shown the world what Turkish Cypriots risk when their fundamental rights are violated, their freedoms threatened and their existence and survival planned to be harmed," he said.

July 20 Peace and Freedom Day in the TRNC commemorates Turkey's Cyprus Peace Operation – a huge military intervention to protect Turkish Cypriots from the violence which struck the island in 1974.

In 1974, following a coup aiming at preventing Cyprus' annexation by Greece, Ankara was forced to intervene as a guarantor power and the island has since been divided into a Turkish Cypriot government in the north and a Greek Cypriot administration in the south. In 1983, the TRNC was founded.

The decades since have seen several attempts to resolve the dispute, all ending in failure. The latest one, held with the participation of the guarantor countries – Turkey, Greece and the U.K. – ended in 2017 in Switzerland.

The Greek Cypriot administration continues to oppose recognition of the political equality of Turkish Cypriots and claims to be the island's sole legitimate government, while its unilateral declaration of exclusive economic zones (EEZ) in the Eastern Mediterranean and initiation of drilling activities in the region have been a cause for concern to the island's north. Meanwhile, the recent unilateral opening of non-military areas of the British Sovereign Base Areas for development by the U.K. and the Greek Cyprus administration remain obstacles for a permanent solution.

Speaking during the ceremony, Akıncı noted that there were times when a solution seemed imminent. "However, no result has been reached due to reasons not stemming from us," he stated.

"Turkish Cypriots ... are struggling for equality for more than 50 years... (have) fought despite all kinds of pressures and threats, and claimed their rights and freedom," Erdoğan continued in his message. "As always, Turkey will make every effort to protect Turkish Cypriots' rights and the rule of law. I commemorate our martyrs who sacrificed their lives in the struggle for liberation, and our veterans with gratitude and respect. I present my best wishes for the peace, welfare and happiness of our brothers and sisters in the TRNC."

The Peace Operation, which was Turkey's first independent military venture abroad in the Republican era, followed two decades of intercommunal violence which saw Turkish Cypriots targeted by Greek Cypriot pro-independence militias during the British colonial rule and after independence. In response, Turkish Cypriots were confined to certain enclaves to protect themselves from ongoing violence.

The chain of events that set the stage for Turkey's Cyprus Peace Operation in 1974 has its roots in the mid-1950s, when EOKA, a terror group seeking "Enosis" (the annexation of islands in favor of Greece) started oppressing and killing local Turkish Cypriots.

Turkish Cypriots were discriminated against and marginalized by Greek Cypriots at state institutions and systematically oppressed as of Dec. 21, 1963, when a night of mass violence, later termed "Bloody Christmas," took place.

The "Bloody Christmas" incidents gave birth to the partition of the central city of Nicosia on Dec. 27, 1963. This partition line is today known as the "Green Line."

On the other hand, new conflicts between the two sides on the island have emerged with the discovery of significant gas reserves in the Eastern Mediterranean a decade ago.

Oktay during his speech at the ceremony underlined that Turkey seeks to widen cooperation and constructive diplomacy in the conflicts in the area – especially in the Eastern Mediterranean. The vice president added that Turkey is a crucial player in the region and those who insistently try to undermine the country will come out on the losing end.

“Under no conditions will we accept the efforts to preserve the current status quo in Cyprus,” Oktay added.