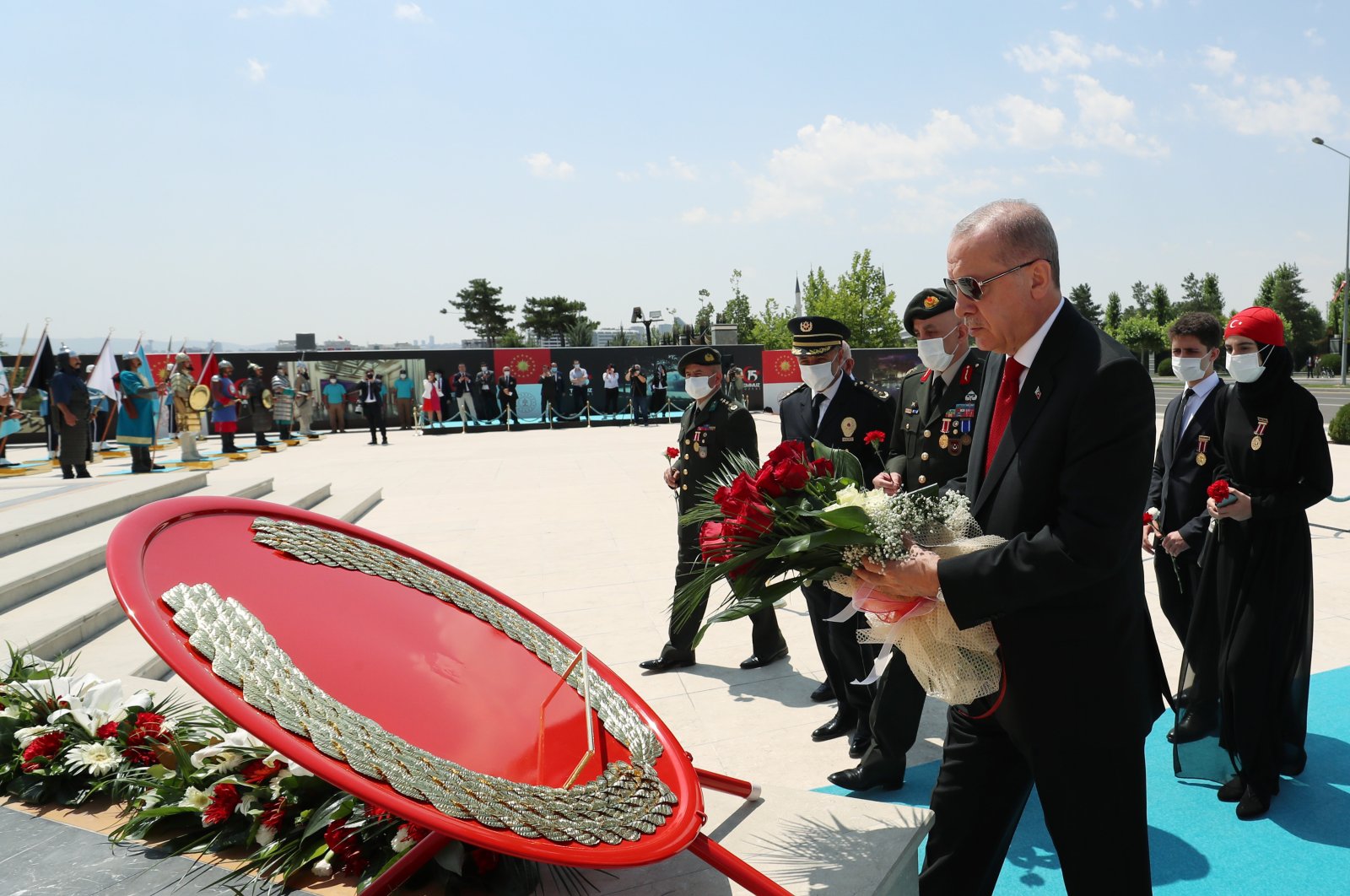 Nationwide ceremonies Wednesday to mark the fourth anniversary of the July 15, 2016, failed coup attempt commemorated the martyrs who died while protecting democracy against the coup plotters and celebrated July 15 Democracy and National Unity Day, with citizens and top officials in attendance.

President Recep Tayyip Erdoğan's program began early in the day with a commemoration ceremony at the Beştepe Presidential Complex in the capital Ankara. Meeting with some victims and survivors of the failed coup attempt at the Presidential Complex, Erdoğan placed a wreath on the July 15 Martyrs' Monument. The president also prayed for those who lost their lives on that night.

Erdoğan then arrived at the Grand National Assembly of Turkey (TBMM) and placed flowers on the spot where the coup plotters dropped a bomb.

Speaking in front of the TBMM July 15 Monument, Erdoğan said that on July 15, millions of heroes emerged across Turkey, leaving a mark on the nation’s future together.

Underlining that it was not a coincidence that the coup plotters targeted Parliament, Erdoğan described July 15 as “a breaking point in history.”

"If they had been strong enough, you can be sure that they would not have hesitated to completely demolish Parliament," Erdoğan said.

"If they had been strong enough, you can be sure that they would not have hesitated to kill notably the country's president and prime minister and all other elected executives," he added.

The president called on all lawmakers to jointly build Turkey's 2023 targets.

"As long as we say 'Turkey comes first,' we accept all different opinions, discussions and debates under the roof of this Parliament; they are even a source of diversity for us," Erdoğan said.

"The main cause of the July 15 treacherous coup bid was Turkey's starting to emerge as a power ... objecting to injustices of the current global system," Şentop said.

He said that they were not observing "a ceremony of mourning" but an event "to declare the determination which defeated the July 15 betrayal."

Later in the day, Erdoğan also attended a dinner for the martyrs’ families held in the exhibition hall at the Presidential Complex.

Addressing families in a speech, Erdoğan said the number of foreign states and institutions recognizing the Gülenist Terror Group (FETÖ) as a terrorist group has steadily increased.

On the night of July 15, 2016, a small military junta, formed by FETÖ members, tried to overthrow the democratically elected government and assassinate Erdoğan, who was on holiday in the Marmaris district of southwestern Muğla province.

The coup attempt, which was the first in almost two decades in coup-prone Turkey, saw FETÖ's military infiltrators try to seize power. The attempt was thwarted thanks to strong public resistance. One of the icons of this resistance was Ömer Halisdemir, a sergeant who was gunned down by one of the coup's leaders upon the orders of a general for he served as an aide. Halisdemir was stationed at the headquarters of the Special Forces Command. Halisdemir, who has been posthumously described as one of the heroes of the anti-coup resistance, was shot dead by another set of putschist soldiers who were accompanying putschist Gen. Semih Terzi, when the latter arrived at the headquarters to take it over. After the killing of Halisdemir, the headquarters were the scene of a brief clash between pro-coup and anti-coup military officers, who ultimately foiled the takeover attempt.

During the night of the coup attempt, pro-coup F-16 and helicopter pilots bombed many government buildings, including Parliament, the presidential complex and the headquarters of the National Intelligence Organization (MIT). Two bombs were dropped on Parliament at midnight, destroying a hall. The bombed area was later renamed Şeref (Honor) Hall. Deputies from all political parties gathered in Parliament after the audacious attack to join the people's resistance.

A number of structures and public spaces were renamed in the immediate aftermath of the coup bid, most notably Istanbul's Bosporus Bridge, which became the July 15 Martyrs' Bridge.

The Foreign Ministry also shared a video to mark the fourth anniversary of the 2016 defeated coup.

"Four years ago an attempted military coup perpetrated by FETÖ terrorist group was stopped by the Turkish nation. Turkish people united against the traitors and protected their democracy. Turkish people's #VictoryofDemocracy," said the ministry's tweet, shared with the video.

The video revolves around a young Turkish pupil studying abroad who delivers a powerful response to his professor's remarks on coup attempts around the world.

The professor says: "According to an article, there have been 236 successful military coup attempts since 1950. In not one did the unarmed public, who were facing an asymmetric power imbalance, demonstrate a simultaneous civil act of will against the armed forces."

"Unfortunately, there has been no attempted coup in world history resisted and stopped solely by the nation itself," the professor says.

The student challenges the teacher's assertion with a simple sentence: "Until the 15th of July 2016."

"That night, the Turkish nation, old and young alike, were all united for democracy and the future of their country. They put their lives on the line, made history, and stopped the dark coup attempt," he continued.

"The Turkish nation made history that night. This is a milestone in the history of coups, and for democracy," he said.