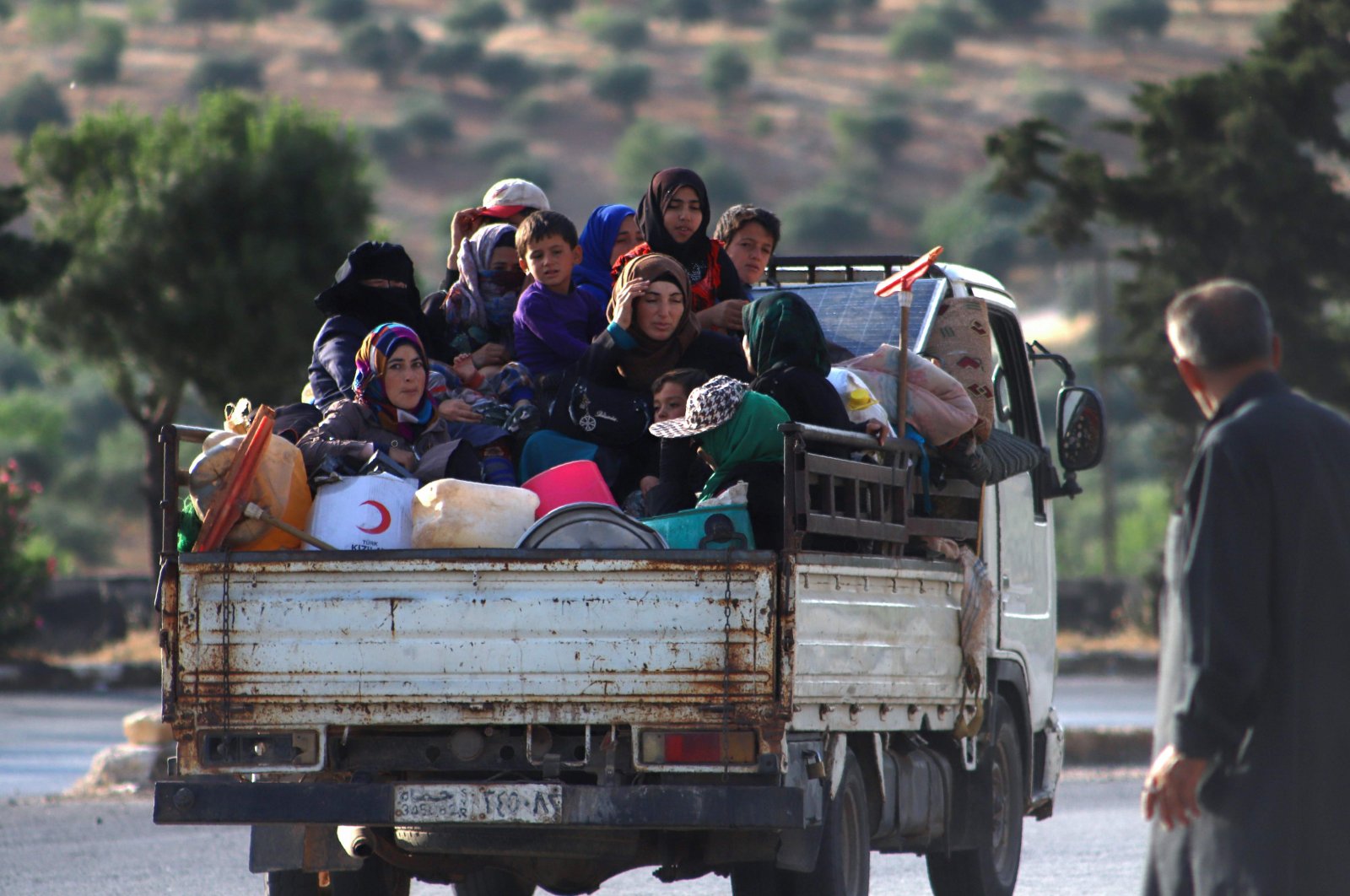 Displaced Syrians sit in the back of a truck loaded with belongings as they flee along the M4 highway, in Ariha in the opposition-held northwestern Syrian province of Idlib, June 8, 2020. (AFP)
by DAILY SABAH Jun 10, 2020 11:45 am
RECOMMENDED

Turkey continues its efforts to restore security in northwestern Syria's Idlib province as a "key" country in the region, the Turkish Presidency's Directorate of Communications said Tuesday.

"Turkey, which already achieved much regarding protecting civilians, stopping the refugee flow and the fight against terrorism, continues its efforts as a key country to turn the region into a safe place," the directorate said in its post, releasing a video on the situation in Idlib with it.

In the video, footage showed the tragedy in the region and the Turkish military operation, with an emphasis on Turkey as the main actor in conflict resolution. It noted that Turkey hosts the largest number of refugees and is the country that has been affected the most by the consequences of the civil war in Syria. The video further highlighted that the Bashar Assad regime and its backers ignore Turkey's suffering from the civil war and aim to exclude opposition actors from the political process while holding the power in the country by themselves.

"Turkey has no other choice than increasing its military power in the region and responding to the attacks of the Assad regime," the video said.

The population of Idlib had gradually increased as many people have fled from regime attacks and torture by terrorist groups. However, the displacement of civilians has intensified since mid-December when the Russian-backed Assad regime started a new assault to seize the last opposition bastion. It is estimated that over 1 million Syrians have moved near the Turkish border due to intense attacks over the last year, while half of these Syrians were displaced after November 2019. After tensions were heightened, Russia and Turkey in March reached an agreement to halt the violence and the flow of displacement. As part of the agreement, all military activities would end in Idlib and a security corridor would be established 6 kilometers (3.7 miles) deep to the north and to the south of the M4 highway.

"M4 and M5 highways have strategic importance," the video said, adding that in the northern and western parts of the highways, Turkey has provided complete security.

"There is the possibility that the cease-fire that was reached on March 5 can be broken at any time," the video further warned, adding that Turkey will do its best to avoid any conflict on its border.

The video was released after Russian airstrikes on Monday killed at least three civilians in Syria’s northwestern Idlib province, breaking the truce that has held steady for months, according to witnesses, local monitors and civil defense groups.

“Three people were killed today by Russian strikes on the Idlib countryside, and several others were injured by the artillery shelling,” the White Helmets civil defense group said Monday.

The Syrian opposition aircraft observatory said similarly that more than 20 airstrikes targeted two mountains and three villages in the Jabal al-Zawiya region and two other villages in the northwestern countryside of the province of Hama.

Furthermore, hundreds of civilians fled, fearing a wider resumption of airstrikes in Idlib, witnesses told Reuters. The Syrian Observatory for Human Rights also made a statement saying that Russian warplanes had launched around 15 predawn strikes on towns and villages in Idlib.

Even though around 270,000 civilians out of the million displaced due to Russian and regime airstrikes have since returned to the region thanks to the relative calm provided by the cease-fire, civilians fled once more following the latest incident.

Assad had previously vowed to retake the last opposition stronghold, which now raises questions as to whether he will resume his deadly offensive on the province.

The war in Syria has killed more than 380,000 people and displaced nearly half of the country's prewar population since 2011.

“There are some radical groups, some unknown groups with their own agenda there that have attempted to disrupt the cease-fire and are violating it, but we are discussing it with our Russian counterparts and the March 5 agreement still stands,” Turkey’s Defense Minister Hulusi Akar told broadcaster A Haber on Tuesday regarding the developments in Idlib.However, he made no mention of Monday’s airstrikes, the first such strikes since the March cease-fire.