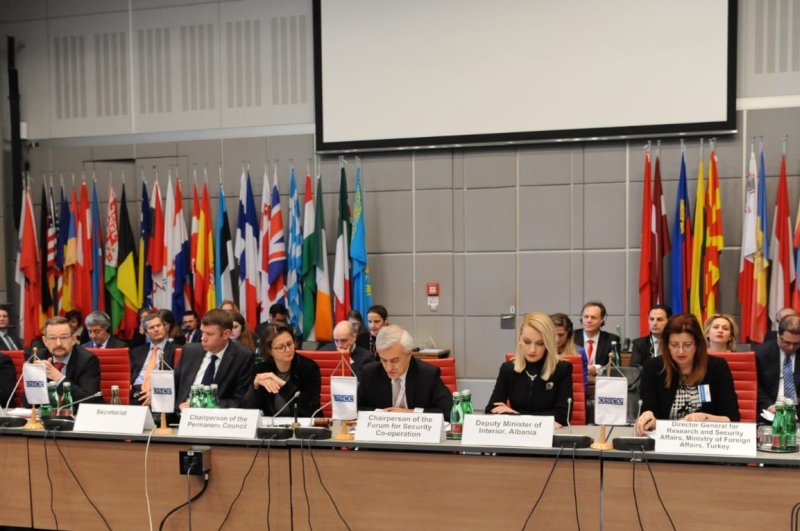 A meeting on the fight against terrorism was held in Vienna during the Organization for Security and Co-operation in Europe's (OSCE) Forum for Security and Cooperation (FSC) headed by Turkey, Feb. 27, 2020. (AA Photo)
by DAILY SABAH Feb 28, 2020 11:28 am
Edited By Dilara Aslan
RECOMMENDED

Under Turkey’s leadership of the FSC, the OSCE’s leading decision-making body discussed how it can contribute to the politico-military sphere in the OSCE’s comprehensive approach to combating terrorism.

“As a country that has been fighting terrorism for decades, it is of utmost significance for Turkey to discuss how we can further the OSCE’s efforts and cooperation among the participating states in countering terrorism,” Rauf Engin Soysal, chairperson of the FSC and Turkey's permanent representative to the OSCE, said as he opened the meeting, addressing the representatives of the OSCE’s 57 participating states.

The director-general for research and security affairs at the Turkish Foreign Ministry, Ambassador Aylin Taşhan, drew attention to Turkey’s concerns in a changing security environment.

“Turkey’s geographical proximity to the conflict zone is the No. 1 factor that should be considered in assessing Turkey's efforts to fight against terrorist organizations. In particular, in the last six years, the regional security environment has changed considerably,” she said. “The rise of racist, extreme right-wing terrorism is another source of concern for Turkey.”

OSCE Secretary General Thomas Greminger elaborated on the OSCE’s mandate and work in countering and preventing terrorism, emphasizing the need for a “whole-of-society” approach to counter this phenomenon.

“Terrorist activity in today’s world is complex, multifaceted and not confined to national borders. This reality requires a comprehensive, nuanced and internationally coordinated response,” he said. “The roles established under the mandates of the permanent council and the FSC respectively have evolved over the years. Discussions today between participating states on where this evolution will take us next are timely and will help us to determine OSCE’s future engagement in global counterterrorism activities.”

The forum, which works to increase military security and stability in Europe, is one of the OSCE’s two main regular decision-making bodies. It helps implement landmark confidence and security-building measures to regulate the exchange of military information and mutual verification between states. Sosyal was chosen to take over the term presidency of the FSC from January to April 2020, 18 years after Turkey last led the forum.

Col. Kadir Özyürek presented the work of the Ankara-based NATO Centre of Excellence-Defense Against Terrorism (COE-DAT), which conducts training and capacity-building courses, among other things.

Albania's Deputy Interior Minister Romina Kuko identified three areas in which the military sphere could contribute to security: “Firstly, in addressing the challenge posed by small arms and light weapons; secondly, in contributing to the nonproliferation of weapons of mass destruction; and thirdly, through the Code of Conduct on Politico-Military Aspects of Security.”