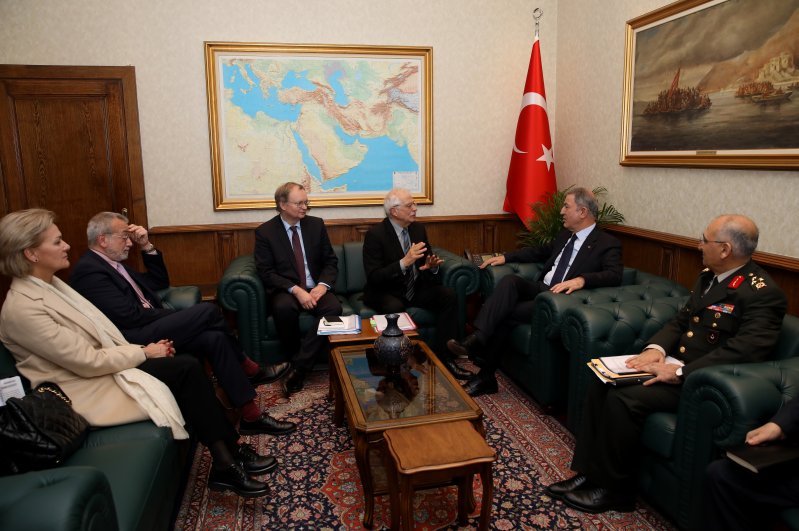 "We need to work hand in hand to address common challenges, for the benefit of both Turkey and the EU," Borrell said on Twitter.

Touching on the humanitarian situation in Syria's northwestern province of Idlib and stressing the importance of de-escalation in the region, he said there is a need to have an in-depth discussion with Turkey on security and defense challenges.

The preliminary agenda of the meeting was the current situation in Idlib and the issue of irregular migrants, the Turkish Defense Ministry said on Twitter.

The meeting focused on the importance of mutual cooperation and dialogue in connection with Idlib.

Idlib, just across Turkey's southern border, falls within a de-escalation zone laid out in a deal between Turkey and Russia in late 2018.

The Syrian regime and its allies have consistently broken the terms of the agreement, launching frequent attacks inside the territory, where acts of aggression are expressly prohibited.

Turkey launched Operation Spring Shield on Feb. 27 after at least 34 Turkish soldiers were martyred in Idlib in an airstrike by forces of the Bashar al-Assad regime.

Under the 2018 deal with Russia, Turkish troops were in Idlib to protect civilians from attacks by the Assad regime and its allies.

More than 1,300 civilians have been killed in the Idlib de-escalation zone in such attacks, sending 1 million refugees toward Turkey's border with Syria.