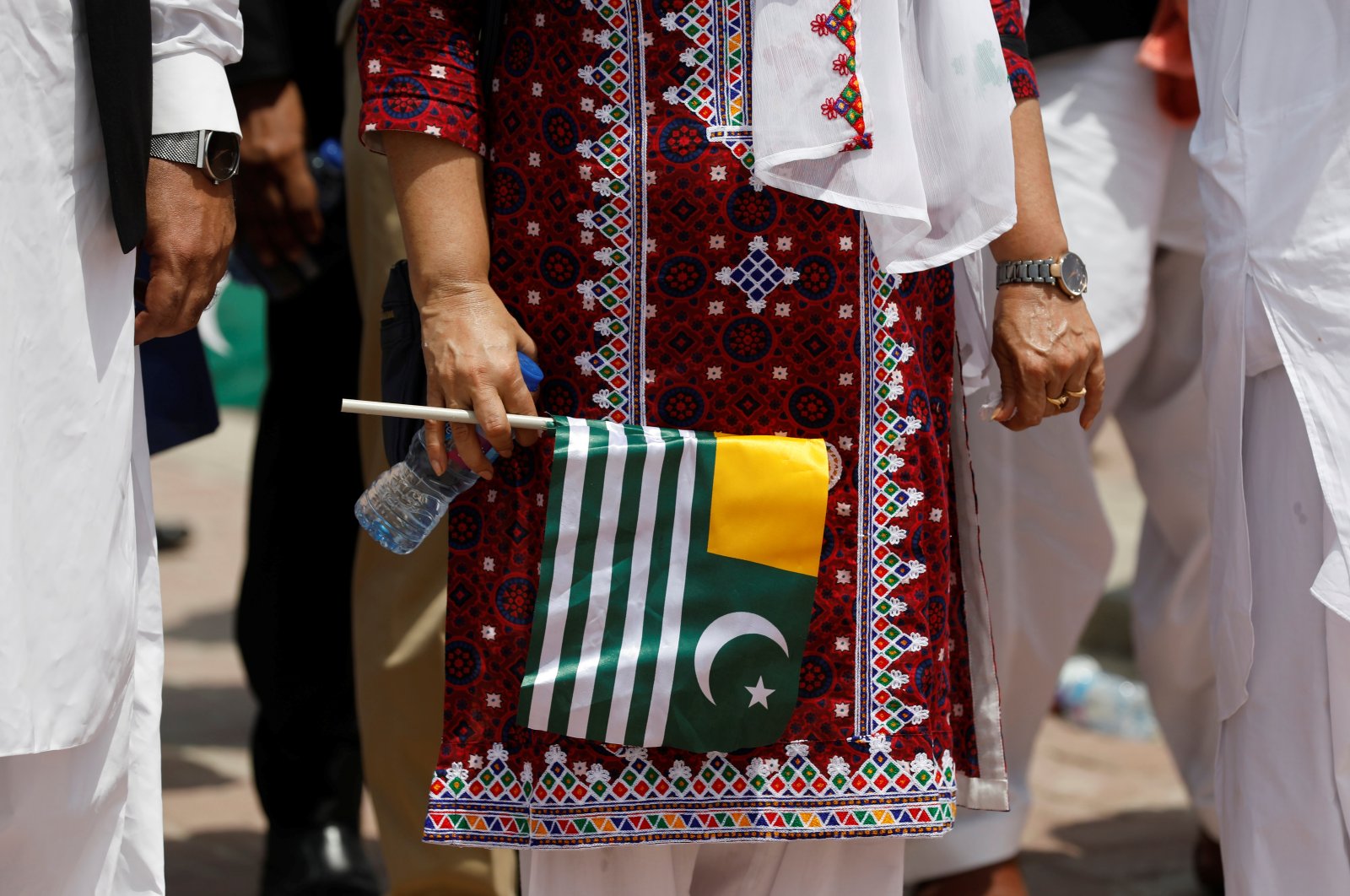 A woman holds a flag as she observes one minute of silence with others to mark the "Day of Exploitation in Kashmir," one year after the Indian government split the state of Jammu and Kashmir into two federally controlled territories and took away its special privileges, during a walk in Karachi, Pakistan, Aug. 5, 2020. (Reuters Photo)
by DAILY SABAH Aug 05, 2020 12:10 pm
Edited By Dilara Aslan

A year has passed since India controversially removed Jammu and Kashmir's special status. However, as the situation worsens in the region, Turkey reiterates its call for de-escalation and dialogue

The Indian government annulling the special status of the disputed Jammu and Kashmir area does not contribute to peace and stability in the region, Turkish Foreign Ministry spokesman Hami Aksoy said Wednesday on the occasion of the first anniversary of India's decision to revoke the seven-decade-long semi-autonomous status of the Himalayan region.

"It is observed that practices implemented over the last year – since the abolishment of the article (370) of the Indian constitution that granted special status to Jammu and Kashmir – have further complicated the situation in Jammu and Kashmir and not served peace and stability in the region," Aksoy said in a statement.

On Aug. 5, 2019, Indian Prime Minister Narendra Modi's government took away Jammu and Kashmir's special privileges, provoking anger in the region and in neighboring Pakistan. It also took away Jammu and Kashmir's status as a state by creating two federally controlled territories, splitting off the thinly populated, Buddhist-dominated region of Ladakh.

Islamabad on Wednesday observed the day as "Youm-e-Istehsal," or the "day of exploitation," to reiterate its condemnation of the move on Aug. 5, 2019, which led to the disputed valley's annexation as Indian territory.

The day began with one minute of silence as traffic across the country came to a halt at 10 a.m. local time (0500GMT) for 60 seconds.

President Arif Alvi and Foreign Minister Shah Mehmood Qureshi then led a rally in Islamabad to express solidarity with Kashmiris.

Jammu and Kashmir had been the only Muslim-majority state in mainly Hindu India. Kashmiri leaders and citizens fear this step is an attempt by the Indian government to change the demography of the Muslim-majority state, where some groups have been fighting against Indian rule for independence or for unification with neighboring Pakistan. The removal of Kashmir's special status, granted to the state via the Indian Constitution's Article 370, was accompanied by harsh restrictions on movement, mass detentions and a complete communication blackout.

Turkey had criticized India's decision last August to scrap nominal political autonomous status for Jammu and Kashmir. The Indian government was riled in February when President Recep Tayyip Erdoğan compared the struggle of Kashmiris with the Ottoman Empire's fight during World War I.

"The position taken by Turkey was eminently sensible. It was a position that both Pakistan and India should have immediately accepted, which Pakistan did by the way. Turkey called for de-escalation, meaningful dialogue, adherence to international law and U.N. Security Council resolutions, and offering its good offices for mediation," Muhammad Syrus Sajjad Qazi, Pakistan's ambassador to Turkey, told Anadolu Agency (AA).

He said India, as the world's largest democracy, should not be afraid of holding a democratic exercise in granting the right to self-determination to the people of Kashmir.

The Pakistani envoy said his country was ready to match steps of reconciliation if India takes the lead, and agrees to have a meaningful dialogue on all issues, including Kashmir.

"If there is a problem in finding a win-win solution, it is not on account of Pakistan. Pakistan is eminently ready for it, has been ready for it for a very long time," he said.

Describing Aug. 5 as one of the darkest days for the region, Qazi said that the Kashmir issue is at the core of Pakistan-India relations. “It also has a direct impact on peace and security in South Asia and beyond. The entire international community has shown concern at the deteriorating human rights in Indian illegally occupied Jammu and Kashmir on account of Indian brutalities,” he continued.

“On the one side, there is the illegal occupation army of the Indian state which has soldiers and weapons and is backed by draconian laws. On the other side, there are innocent Kashmiris who are brutally oppressed. Despite this disparity and use of brute force by India, the will of the Kashmiris remains unbroken,” the envoy stated.

The Kashmir dispute, one of the oldest on the agenda of the U.N. Security Council, erupted between India and Pakistan in 1947. The Security Council called for a referendum to decide the region's fate in 1948. While India says the decision to support accession to India through elections held in territories controlled by an administration that is backed by New Delhi made a referendum unnecessary, the U.N. and Pakistan say a referendum needs to take into account the views of voters throughout the former princely state.

Kashmir is held by India and Pakistan in parts but claimed by both in full. A small sliver of the region is also controlled by China. Since they were partitioned in 1947, New Delhi and Islamabad have fought three wars, in 1948, 1965 and 1971, two of them over the disputed territory.