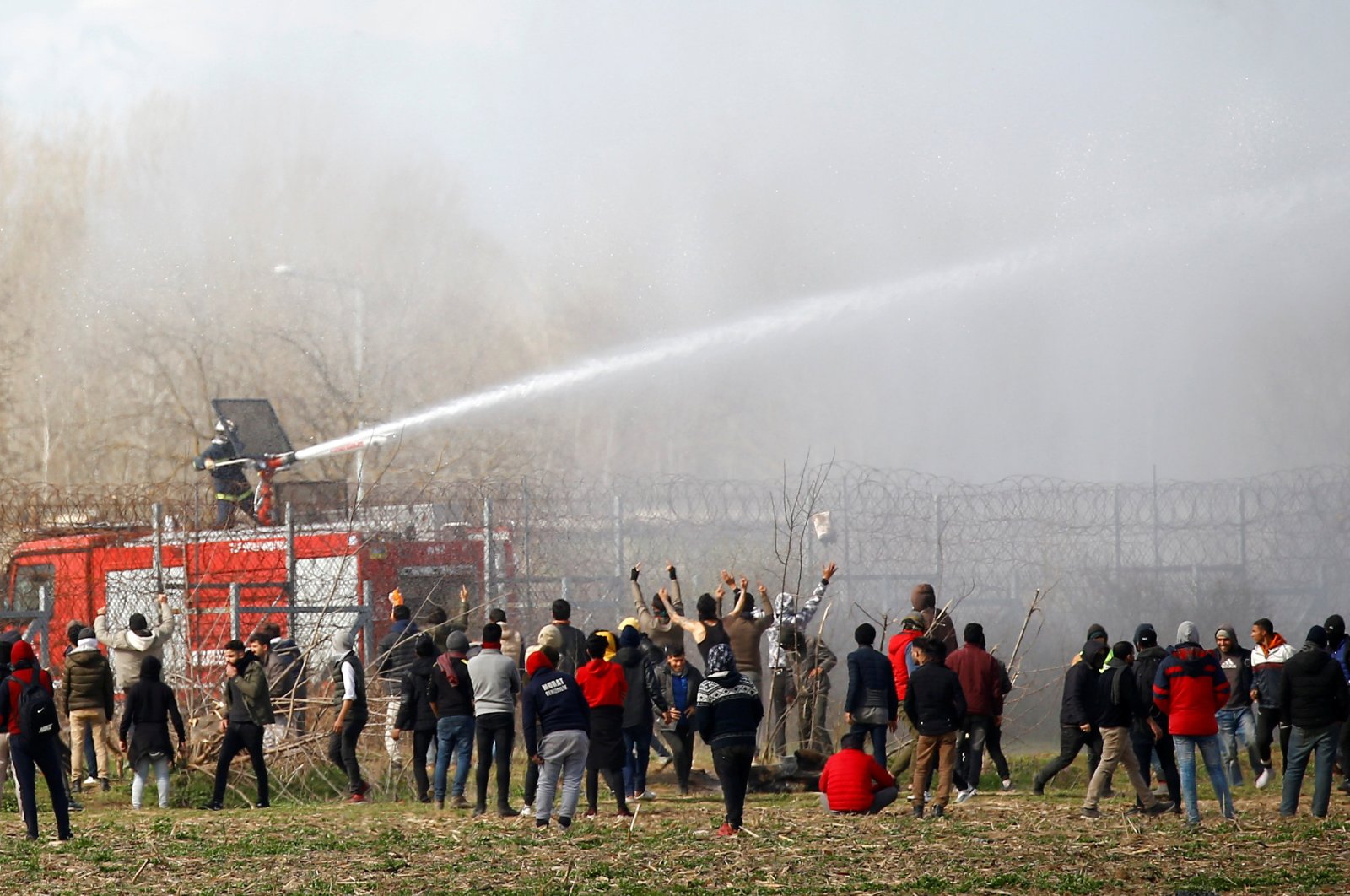 A Greek firefighter uses a water cannon as migrants gather on the Turkish-Greek border near Turkey's Pazarkule border crossing with Greece's Kastanies, in Edirne, Turkey, March 7, 2020. (Reuters File Photo)
by DAILY SABAH WITH AA May 21, 2020 9:40 am
Edited By Nurbanu Tanrıkulu Kızıl
RECOMMENDED

Turkey is not the doorkeeper or the migrant camp of the European Union, a Foreign Ministry spokesperson said in response to a statement by an EU official Wednesday.

Hami Aksoy slammed a statement by Margaritis Schinas, European Commission vice president for Promoting Our European Way of Life, about the country and migration, saying it was more like the political discourses of members of the Greek government than of a European Union official.

Schinas told Euronews that the developments on the Greek-Turkish border in the Evros region have shown that "Ankara does not have the power to exploit refugees to get its way politically." He also noted that it was crucial for transit countries to create opportunities for migrants and refugees so they are not "forced into the mercy of smugglers in the Mediterranean" and can stay in those countries.

"Our country, which suffers from the irregular migration phenomenon, only wants the fair sharing of burdens and responsibilities," Aksoy said in a written statement.

Aksoy said protection of the EU's external borders by ignoring human rights and the rights of asylum-seekers will mean denying the founding agreements of the EU.

Lastly, he said seeing the external borders of Europe as only including Greece means historical and geographical facts are not understood.

Therefore, said Aksoy, Turkey reiterated that Schinas must first investigate the violations committed by Greek officials, such as the homicide of Pakistani Muhammad Gulzar, the push-back incidents in the Aegean Sea and Evros river that continue under the noses of EU agencies, the rejection of asylum applications of asylum-seekers, national practices contrary to international treaties and the EU asylum directive, and violence against human rights defenders.

Turkey decided to open its border to Europe after 34 Turkish soldiers were killed by forces of the Bashar Assad regime in Idlib in northwestern Syria. Turkish soldiers had been stationed in the area to protect local civilians as part of a 2018 deal with Russia forbidding acts of aggression within a certain delineation.

The latest humanitarian crisis in Idlib caused by Assad's attacks on civilian-populated areas has forced nearly a million people to move near the Turkish border for refuge. The renewed attacks risked another wave of migration to Turkey, which already hosts 3.7 million Syrian refugees and says it cannot take in any more.