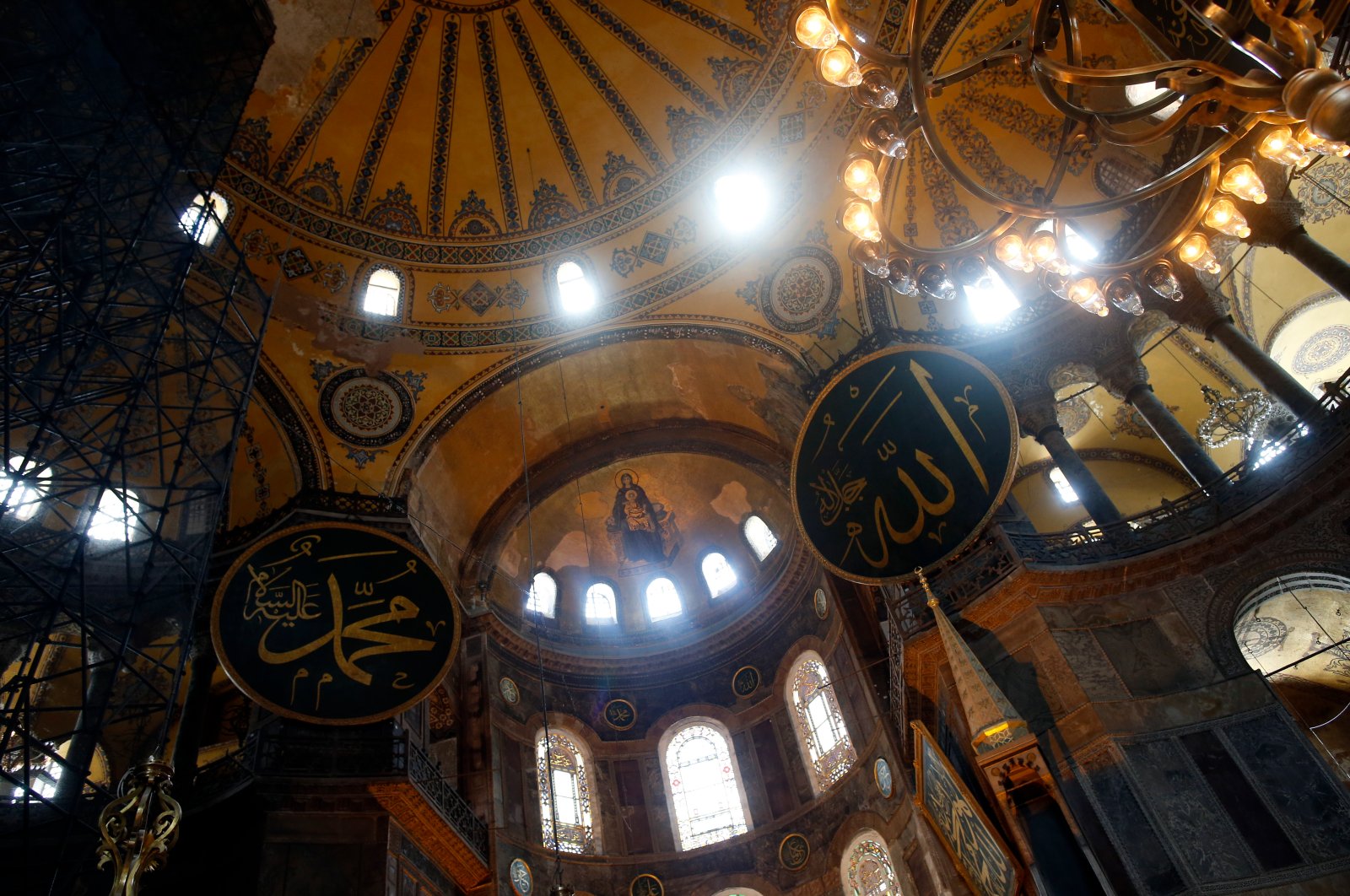 A view of the Hagia Sophia, a UNESCO World Heritage site and one of Istanbul's main tourist attractions in the historic Sultanahmet district of Istanbul, July 10, 2020. (AP Photo)
by Dilara Aslan Jul 13, 2020 3:03 pm

Aware of Hagia Sophia’s outstanding cultural, historical and spiritual value, Turkey says that the World Heritage status of the landmark monument will not be affected due to the recent decision to turn it into a mosque

Polemics have erupted after a top Turkish court annulled a 1934 government decree turning Istanbul’s landmark Hagia Sophia into a museum, paving the way for it to be turned back into a mosque. As UNESCO has been contending that the universal value of the World Heritage Site could be affected by the change of its status, Turkey has been arguing that the monument's new status constituted no breaches to UNESCO's World Heritage Convention.

"In the case of Hagia Sophia, Turkey has officially acknowledged the Outstanding Universal Value assigned to it by the international community and has been managing the monument accordingly since the inscription of the property on the List in 1985," Deputy Foreign Minister Yavuz Selim Kıran told Daily Sabah.

"Hagia Sophia was inscribed on the UNESCO World Heritage List as a component of 'The Historic Areas of Istanbul' in 1985. As a state party of the Convention Concerning the Protection of the World Cultural and Natural Heritage (1972 Convention) since 1983, Turkey is fully aware of its responsibilities originating from 1972 Convention," Kıran underlined, stressing that Turkey is aware of its outstanding cultural, historical and spiritual value in all senses.

Following the court ruling on Friday, the Council of State stated that Hagia Sophia is officially registered as a mosque in its deed, adding that it was decided that its use for anything other than a mosque was legally not possible. "The Cabinet decision in 1934 that ended its use as a mosque and defined it as a museum did not comply with laws," it said while President Recep Tayyip Erdoğan announced that the historical complex is expected to be ready for worship by Friday prayers on July 24.

UNESCO said on Friday its World Heritage Committee would review Hagia Sophia's status and that Turkey's decision raised questions about the impact on its universal value as a site of importance transcending borders and generations.

“States have an obligation to ensure that modifications do not affect the Outstanding Universal Value of inscribed sites on their territories. UNESCO must be given prior notice of any such modifications, which, if necessary, are then examined by the World Heritage Committee,” UNESCO said in a written statement.

UNESCO’s questions surrounding Hagia Sophia’s new status included how the decision would affect physical access to the site, the structure of the buildings, the site’s moveable property and the site’s management.

Dismissing claims as untrue that the world's historical heritage would be "shadowed or destroyed" by the decision, Turkey stressed that the religious iconography in the sixth-century complex would be preserved.

“The Hagia Sophia decision of the Council of State has rectified a historical defect of 86 years,” Bülent Turan, Justice and Development Party (AK Party) Group Deputy Chairman told Daily Sabah, “Estranging a structure, the property of which belongs to Turkey, was going against our sovereignty.”

Highlighting that this decision will not harm the historical value of the Hagia Sophia for humankind and for people of all religions, Turan said that Hagia Sophia is equally valuable for all humanity.

"As we have constantly repeated, Hagia Sophia is a part of Fatih Sultan Mehmet Endowment as a “mosque,” which was established by the sultan himself in 1462. Hagia Sophia is legally a property of this endowment," Kıran elaborated, "According to the Turkish Law on Endowments, a property (hayrat) should primarily be used in pursuant of function it was written in its founding document (Waqfiye)."

Hagia Sophia, one of the world’s most important historical and cultural heritage sites, was built in the sixth century during the reign of the Byzantine Empire and served as the seat of the Greek Orthodox Church. It was reverted into an imperial mosque with the Ottoman conquest of Istanbul in 1453. The structure was turned into a museum during the secular single-party rule in 1935, but there have been discussions about reverting it to a mosque, with public demand to restore it as a place of worship gaining traction on social media.

A source of architectural inspiration for many mosques and churches that were built later, the Hagia Sophia boasts gold-plated, silver-plated, glass, terracotta and colored stone mosaics and the original ceiling mosaics of the sixth century with their floral and geometric motifs.

Despite Turkey’s assurances that the monument would continue to host people of all religions and backgrounds while historical and religious icons would also be preserved, the decision was hotly contested throughout the globe.

Russia is of the view that no one should interfere in the decision, he said in an interview with Sputnik radio.

"We assume that we are talking about Turkey's internal affairs, in which, of course, neither we nor others should interfere. At the same time we pay attention to its significance as an object of world culture and civilization," he said.

The decision has also won praise in the Arab world. "We congratulate Turkey and ourselves for reverting Hagia Sophia back to a mosque because it belongs to all Muslims," Ekrema Sabri, the preacher of Jerusalem's al-Aqsa Mosque, said in a statement while the Grand Mufti of Oman, Ahmed bin Hamad al-Khalili, similarly offered his congratulations on Sunday.

Conversely, along with UNESCO, the United States, European Union, Russia and Greece have expressed dismay at the decision.

"I think of Hagia Sophia, and I am very saddened," Pope Francis said toward the end of his midday sermon in Saint Peter's Square on Sunday, the first reaction from the Vatican to Turkey’s decision while the interim secretary-general of the World Council of Churches has written to Turkey's president expressing his “grief and dismay” over Turkey's decision. As a World Heritage museum, “Hagia Sophia has been a place of openness, encounter and inspiration for people from all nations,” Ioan Sauca said in the letter released Saturday by the Geneva-based group.

The Russian Orthodox Church on Friday said it regretted the decision and that it could “lead to even greater divisions” while Greece on the same day echoed criticism saying it would have repercussions not only on relations between the two countries but on Turkey's ties with the European Union. Greece branded Turkey's move an "open provocation to the civilized world."

The transformation of the Hagia Sophia dominated the headlines in Greek newspapers this weekend. Upon Greece’s increasing statements on the Hagia Sophia, Erdoğan said Saturday: "Those who do not take a step against Islamophobia in their own countries ... attack Turkey's will to use its sovereign rights.” The president noted that there are 435 churches and synagogues in Turkey where Christian and Jews can pray.

"We condemn this defamation campaign led by Greece and emphasize that Hagia Sophia will be open to visitors from all faiths and religions around the globe. Anyone will be able to enter this magnificent sanctuary without buying a ticket," Kıran stated.

Saying that Turkey has always been a grand supporter of freedom of religion and freedom of worship, Kıran reminded that Turkey systematically restores the churches in different cities of the country, including Orthodox churches. "During the last decade, Turkey has already completed restoration of more than 50 churches," he said.

"Moreover, it is unfortunate that those who criticize us, are not an advocate of cultural heritage and freedom of religion when it comes to the Ottoman heritage in their territory. For example, in Greece, many Ottoman mosques were either destroyed or converted into churches and that some others are being used in a way which does not comply with their original purpose of construction – be it spiritual or otherwise," Kıran said.

Hakan Çavuşoğlu, head of the Turkish Parliament’s human rights investigation commission underlined that not a single mosque existed in the Greek capital Athens where 300,000 Muslims lived. “All European capitals except for Athens have mosques,” he stressed.

Similarly, the U.S. also voiced discontent saying that it is “disappointed by the decision by the government of Turkey to change the status of the Hagia Sophia.” State Department spokeswoman Morgan Ortagus added that the U.S. understands that Turkey remains committed to maintaining access to the Hagia Sophia for all visitors.

In response to the criticisms on Hagia Sophia, Turkey said the 1,500-year-old Hagia Sophia would remain open to Muslims, Christians and foreigners but that it had exercised its sovereign right in converting it to a mosque and would interpret criticism of the move as an attack on its independence.

Kıran remarked that former Portuguese Secretary of State for European Affairs Bruno Maçaes said something very interesting in a message on Twitter. “After the press release of UNESCO regarding Hagia Sophia, he asked why UNESCO does not push for Notre Dame and Vatican be turned into museums. I will give you another example from Cordoba. Cordoba Mosque was inscribed to the World Heritage List in 1984. It was converted to a Cathedral in 1236 and is still being used in the same function," he said.

The deputy foreign minister said that another example of a status change is the case of Saint John's Co-Cathedral in Valetta, inscribed in the UNESCO World Heritage List in 1980 as a component of the City of Valetta. The cathedral was converted into a museum in 2001, after it stopped being a space for religious functions following a restoration process in 1980s and 1990s.

“These examples reveal that, in the past, states had also changed the status of a cultural property inscribed on the World Heritage List,” Kıran highlighted.