Turkey prepares for grand reopening of Hagia Sophia as mosque 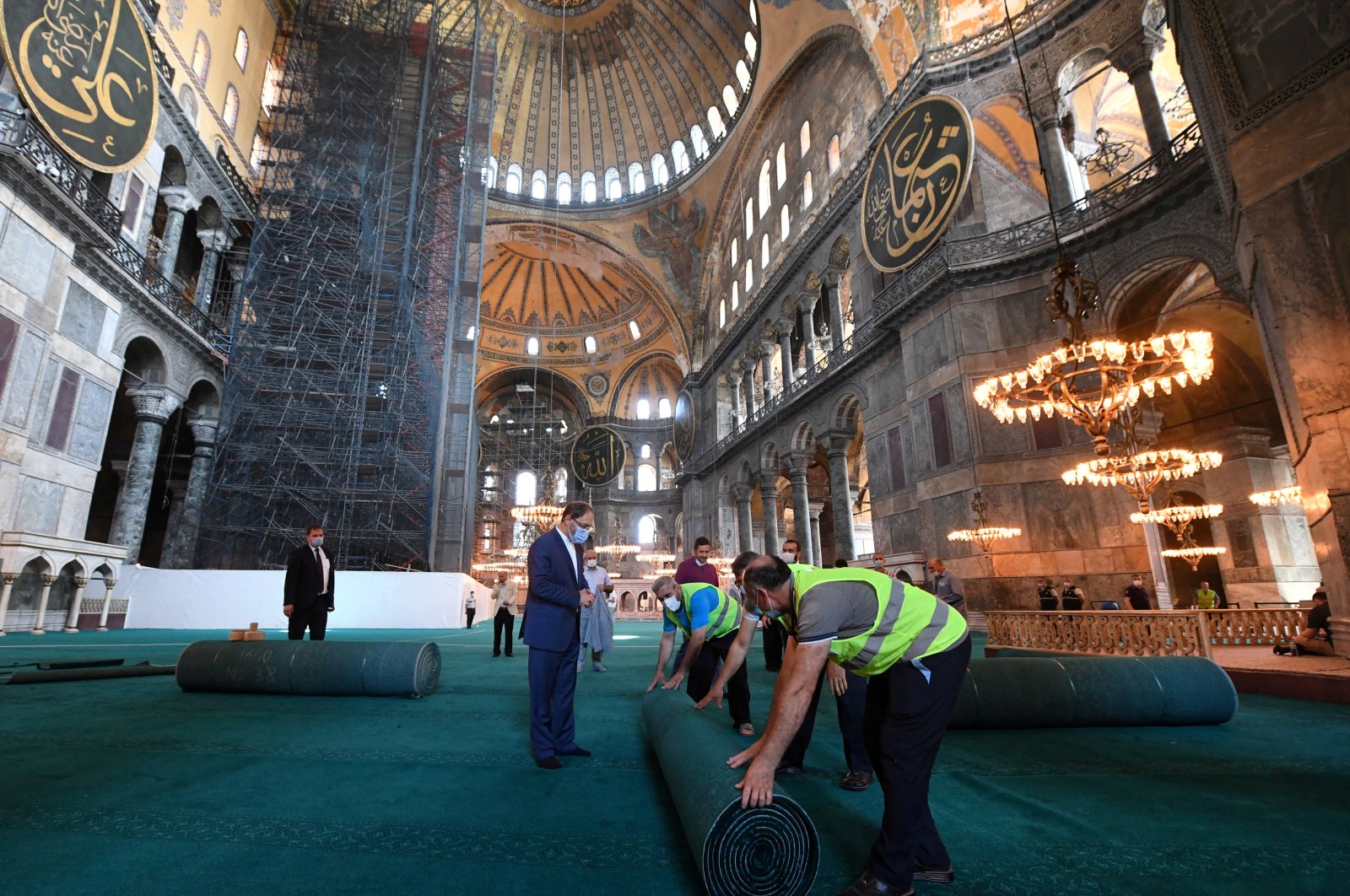 After 86 years of operating as a museum, Istanbul's Hagia Sophia will reopen on Friday as a mosque, a move that has become a cause of celebration for Muslims not only in Turkey but also all around the world.

Filled with excitement over hosting the reversion of the ancient structure to a mosque, Istanbul is getting ready for the grand opening with strict measures in accordance with both social distancing and Islamic rules.

"We know that it is the biggest desire of our visitors to pray in Hagia Sophia," said the Governor of Istanbul Ali Yerlikaya on Thursday, underlining that they have taken necessary precautions to meet this demand properly.

Yerlikaya stated that in order for everyone to have enough time to pray, the structure will open its doors to visitors at 10 a.m. and will stay open until the next morning.

"Because of the plague, within and around the mosque, five spots, two of which are for women, have been determined as praying areas," he said, emphasizing that there is enough space for everyone to pray without violating social distancing rules.

According to the governor's statements, there will be 11 different checkpoints for the security officials to have control. "In order for speed and easy entry process, we request our visitors to not bring any backpacks or purses," Yerlikaya said.

The governor further reminded that visitors' temperatures will also be checked while wearing masks will also be mandatory. There will be 17 health spots in which 736 health personnel will be actively working along with an ambulance unit consisting of 101 vehicles and a helicopter.

Due to the expectancy of a major crowd, some roads will also be shut down, Yerlikaya added.

Istanbul Metropolitan Municipality (IBB) also has taken precautions for the big day. Providing 25 shuttles for public transportation to the mosque for free, the municipality also made parking areas in the region free. The municipality also plans to hand out 25,000 bottles of water, masks, disinfectants and disposable prayer rugs.

Some 1,500 people are expected to participate in the Friday prayers at the opening ceremony.

Hagia Sophia is among the most-visited destinations in Turkey for both domestic and foreign tourists.

In 1985, during its time as a museum, the structure was added to the UNESCO World Heritage List.

On July 10, a Turkey's Council of State annulled a 1934 Cabinet decree that had turned Hagia Sophia into a museum, paving the way for its use again as a mosque after an 86-year hiatus. Before that, it had been a mosque for nearly 500 years.

On July 16, Turkey's Religious Affairs Directorate (Diyanet) signed a cooperation protocol with the Culture and Tourism Ministry to run Hagia Sophia after its reversion to a mosque.

Under the protocol, the Culture and Tourism Ministry will supervise restoration and conservation work, while Diyanet will oversee religious services.

The architectural treasure will also be open to domestic and foreign tourists free of charge.

Turkey also ensured that despite being reverted to a mosque, the Christian mosaics of the heritage will continue to be preserved.

"The main point here is that there is no damage to these mosaics, depictions, the historical texture and architecture of the building," Turkey's presidential spokesman Ibrahim Kalın said on the issue last week.

"Currently, we are working on covering them with a curtain (during prayers)," Kalın added.

Erdoğan to attend the ceremony

Hagia Sophia's reversion into a mosque thrilled many members of the Turkish public and politicians, including President Recep Tayyip Erdoğan.

Sharing a video clip of the structure on his social media account on Wednesday, the president wrote: "...you have been ours forever, and we have been yours," referring to the mosque.

The video clip included a song for Hagia Sophia, which was sung in nine different languages, including Kurdish and Arabic apart from Turkish.

Previously, Erdoğan also paid a surprise visit to inspect the landmark on Sunday before the grand reopening.

Erdoğan will not be the only politician to attend the Friday Prayers during the grand opening. The head of Diyanet Ali Erbaş has been inviting people from political circles for the inauguration ceremony. In this respect, Erbaş has personally called the leaders of five political parties. These parties were, apart from the ruling Justice and Development Party (AK Pary), the main opposition Republican People's Party (CHP), Nationalist Movement Party (MHP), Good Party (IP) and Great Union Party (BBP). The pro-PKK Peoples' Democratic Party (HDP), however, is not invited.

Head of the MHP Devlet Bahçeli confirmed that he will be attending the ceremony, as well as the head of the BBP, Mustafa Destici. The leader of the IP, Meral Akşener, however, despite initially confirming her attendance, will not be participating in the ceremony since she is currently under lockdown due to coronavirus suspicion.

The chairman of the CHP, Kemal Kılıçdaroğlu, however, directly rejected the invitation, causing many to react.

AK Party's group deputy chairman Özlem Zengin mentioned the CHP head's rejection during a parliamentary session on Wednesday, saying that political ideologies should not be confused with religious duties.

"I realize that especially the ones who refuse the invitation, have almost no enthusiasm at all (regarding the opening). We see that attending the prayers, even if it is a Friday Prayer during which having collective prayers is binding in the religion, is regarded as if a political show off," she said, calling all politicians to share similar enthusiasm with the rest of the public over the project.

The reversion of Hagia Sophia to a mosque has received both major praises and criticisms both from within and outside Turkey.

The Muslim community, in general, has welcomed the move as many Islamic leaders sent letters to Erbaş over the past couple of weeks, expressing gratitude for the decision.

The latest supportive step came from Algeria, where the country's Movement of Society for Peace party, which has Islamic tendencies, backed the decision while condemning the critiques of some Arab countries.

Accusing certain countries such as United Arab Emirates (UAE), Saudi Arabia and Egypt, which have all criticized Turkey's move, with "getting away from civilization," one of the deputies of the party Nasser Hamdadouche said that although it is "weird" to see that the West has united for the Hagia Sophia to remain as a museum, it is even "weirder" to see that these Arab countries are also siding with them.

Despite massive support from the Muslim world, however, the move continues to receive criticism, mainly from countries with a heavy Christian population.

On Wednesday, Russian President Vladimir Putin and Greek Prime Minister Kyriakos Mitsotakis have called for the Hagia Sophia to serve as a "symbol for peace and understanding."

In a phone call, Putin and Mitsotakis called the Hagia Sophia an "achievement of all mankind," the Kremlin said.

They also emphasized the "extraordinary cultural, historical and spiritual importance of this unique World Heritage property."

Previously, Russia had officially declared that it would not interfere in Turkey's internal affairs. But key politicians and the leadership of the Russian Orthodox Church have criticized Turkey's decision.

"The threat to St. Sophia is a threat to all Christian civilization – and therefore to our clergy and history," Patriarch Kirill, head of the Russian Orthodox Church, said earlier this month.

The United States, the European Union and UNESCO have also expressed dismay at the reversion of the site.

Foreign reactions against the reversion of Hagia Sophia into a mosque are null and void, Erdoğan previously said last week on the issue in response to criticisms. “This is a matter of our domestic politics. No one has the right to intervene in this subject,” the president said, answering the questions of the reporters following Friday prayers. “To be honest,” Erdoğan expressed, “This (the reversion of Hagia Sophia to the mosque) was our biggest dream when we were young. We are especially happy to make our dream come true.”