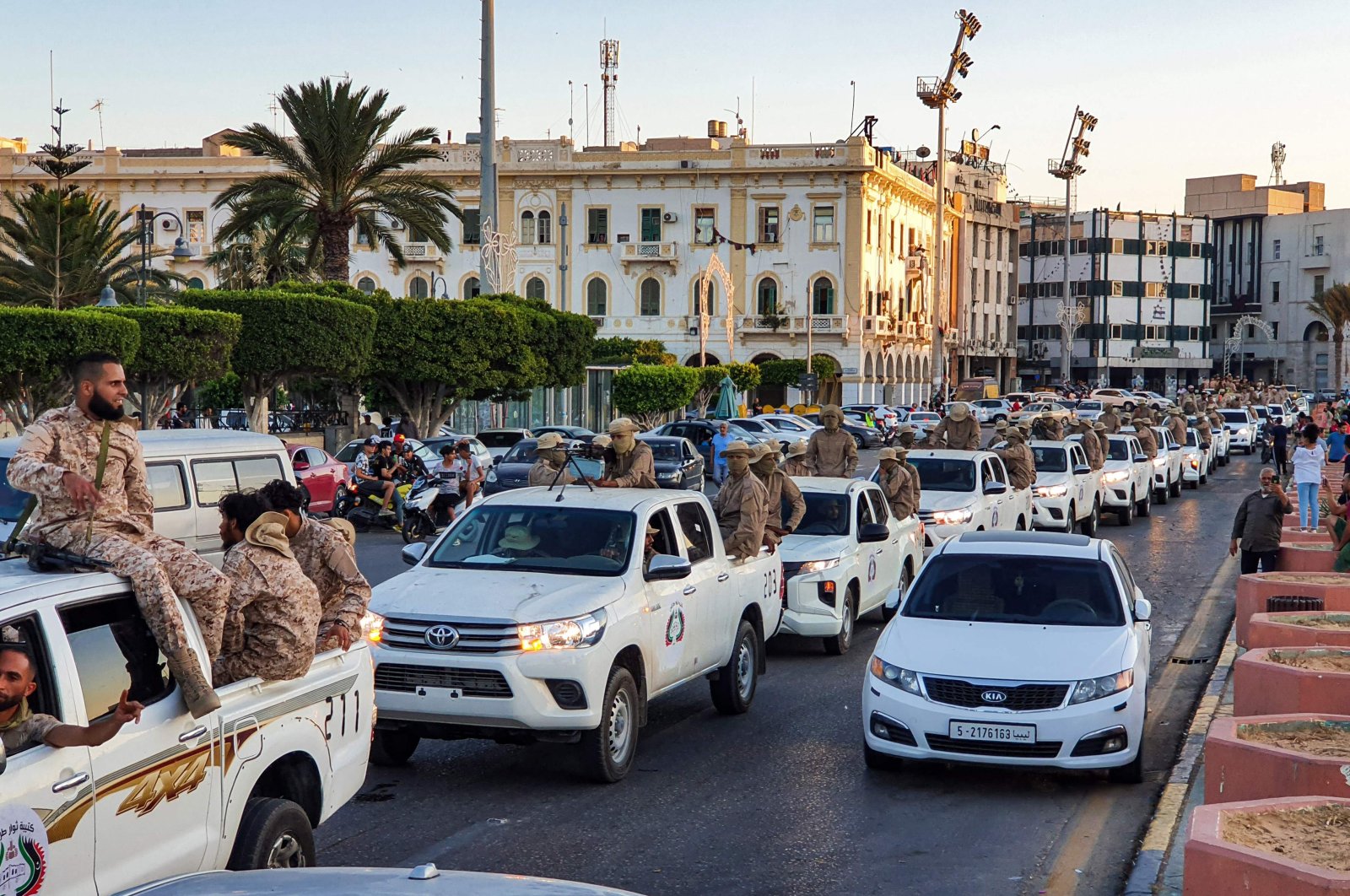 Vehicles of forces loyal to the U.N.-recognized Government of National Accord (GNA) parade through Martyrs' Square in the center of the capital Tripoli, Libya, July 10, 2020. (AFP Photo)
by DAILY SABAH Jul 22, 2020 1:07 pm
Edited By Dilara Aslan

As global diplomacy has increasingly focused on the Libyan conflict, Turkey and Russia have agreed to solve the civil war through a Libyan-led, Libyan-owned and U.N.-facilitated process in delegation talks

Turkey and Russia, whose leaders launched an initiative in Istanbul on Jan. 8 to de-escalate the situation on the ground and pave the way for a political process in Libya, on Wednesday reiterated the need for intra-Libyan dialogue for the creation of a lasting and sustainable cease-fire in the war-torn country.

Reaffirming their strong commitment to the sovereignty, independence, unity and territorial integrity of Libya, both countries in a joint statement on the Turkish-Russian High-Level Consultations in Ankara expressed their “conviction that there is no military solution to the Libyan conflict and it can only be solved through a Libyan-led and Libyan-owned, U.N.-facilitated political process.”

The statement further said that the creation of a Joint Working Group on Libya was considered while the next round of consultations is planned to take place in Moscow in the near future.

Turkey and Russia further emphasized the necessity to combat terrorist individuals and entities as designated by the U.N. Security Council and vowed to continue joint efforts, including encouraging the Libyan parties, with a view of creating conditions for a lasting and sustainable cease-fire.

Furthermore, the statement called upon the parties to take measures in order to ensure safe humanitarian access and delivery of urgent assistance to all those in need.

Turkey and Russia in January had established a cease-fire in the oil-rich country which was then followed by the Berlin conference, aiming to start a political process and attended by global powers and regional actors.

World leaders in the past few weeks have been busily engaged in diplomatic efforts over the current situation in Libya, while Egypt threatens to intervene in support of putschist Gen. Khalifa Haftar and the United Nations unity government moves closer to a strategic province that could turn the tide in the yearslong conflict.

After Egypt's parliament on Monday gave President Abdel-Fattah el-Sissi the green light for a possible military intervention in Libya by approving the deployment of armed forces abroad, the international community has been alarmed that the conflict in Libya could escalate and warned of foreign interventions into the oil-rich country.

Germany, which has similarly criticized Egypt's plan to deploy troops in neighboring Libya, stated that decisions on military interventions are "not welcome, instead there is always a danger of them contributing to escalation."

Turkey had a busy week in terms of diplomatic efforts, starting off with a trilateral meeting Monday in Ankara with Libyan Interior Minister Fathi Bashagha and the Maltese minister of home affairs and national security, Byron Camilleri. Moreover, Defense Minister Hulusi Akar discussed the latest developments in Libya with his Qatari counterpart Khalid bin Mohammed al-Attiyah on Monday.

Meanwhile, Turkish Foreign Minister Mevlüt Çavuşoğlu, who's on a three-day tour of West Africa, said on Tuesday those seeking a military solution in Libya will be frustrated, as only a political solution will work. "The only solution in Libya is a political solution. We've been saying the same thing since the beginning," Çavuşoğlu told a joint news conference alongside his Nigerien counterpart Kalla Ankourao in the capital Niamey.

Presidential spokesman Ibrahim Kalın also said on Tuesday that Turkey is adamantly opposed to Libya's partition, be it in principle or by law.

"We are absolutely against the breaking up of Libya, whether in reality, or on the map, or politically or geographically," Kalın said during an interview with CNN International. "That will be a devastating scenario. We have seen similar cases in Iraq, in Syria, in other places. We should draw lessons from that."

Kalın said the Turkish government would continue to support the UN-recognized GNA, accusing Haftar of sowing "havoc" in Libya while Erdoğan on Sunday in an interview with Turkey's Kriter Magazine said that the foreign mercenaries who turned Libya into a "bloodbath" will be removed from the war-torn country in no time.

Libya has remained beset by turmoil since the ouster of Moammar Gadhafi in 2011. The country's new government was founded in 2015 under a U.N.-led agreement, but efforts for a long-term political settlement failed due to a military offensive by eastern-based Haftar's forces.

Since April 2019, Haftar's illegitimate forces have launched attacks on the Libyan capital of Tripoli and other parts of northwestern Libya, resulting in more than 1,000 deaths, including civilians. However, the U.N.-recognized Government of National Accord (GNA) thwarted a 14-month campaign of Haftar by retaking strategic provinces and clearing southern Tripoli off his militias.

Now, the official government is eyeing the military air base in Jufra and the key province of Sirte. A large number of military vehicles last week reached Abugrein as part of Operation Paths to Victory launched to liberate the central cities of Sirte and Jufra, which el-Sissi described as his “red line,” from Haftar's militias.

The key city of Sirte, which lies some 450 kilometers (280 miles) east of the capital, is currently under the control of Haftar's forces. Taking Sirte would open the gate for Tripoli-allied forces to advance even farther eastward and to potentially seize control of vital oil installations, terminals and oil fields that forces loyal to Haftar shut down earlier this year, cutting off Libya’s major source of income.

The oil crescent, which stretches from Ras Lanuf to Sirte and to the Jufra district, accounts for more than 60% of Libya’s total oil production. Therefore, it is vital for financing the civil war and a point of conflict and competition among the fighting sides.

The U.S.’ stance toward the Libyan conflict, on the other hand, has been inconsistent as U.S. President Donald Trump, on the same day Egypt approved the military intervention in Libya, praised Cairo’s efforts for a "political solution in the country" in a phone call.

Trump also held a phone call Tuesday with another actor backing Haftar, Abu Dhabi's Crown Prince Sheikh Mohammed bin Zayed, in which the "importance of de-escalation in Libya through the removal of foreign forces" was discussed. The call came a day after Trump and French President Emmanuel Macron had a “great discussion on Libya,” in the French president’s words.

France, the United Arab Emirates (UAE), Egypt and Russia are the main backers of Haftar with financial, arms and mercenary support that has frequently been reported by the U.N. and rights groups.

Furthermore, it has been documented that the UAE illegally benefits from the conflict-ravaged country’s oil reserves in order to provide financial resources to Haftar's forces, while Russia has been sending Wagner Group mercenaries to fight against the GNA.