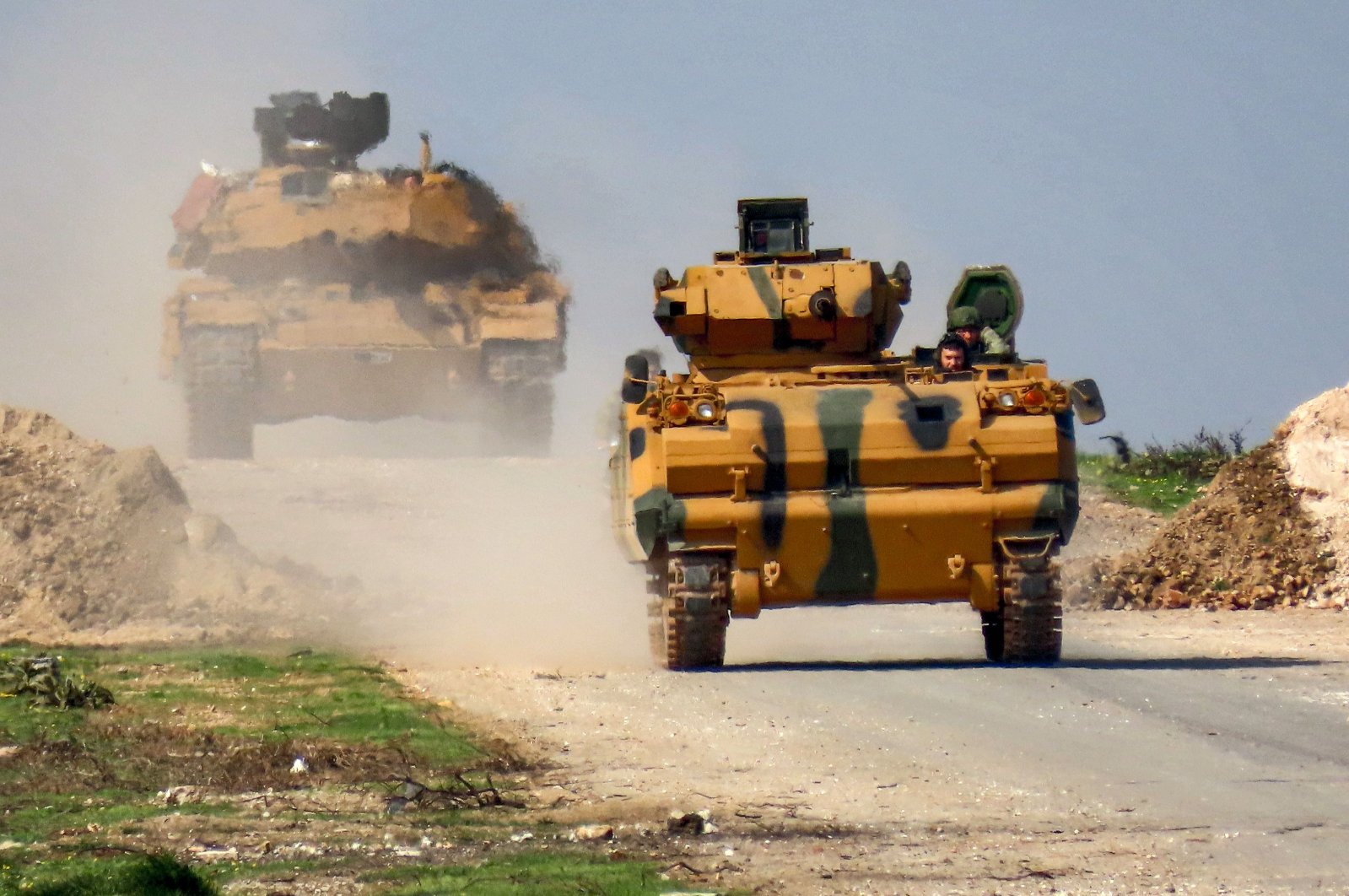 A Turkish military infantry-fighting vehicle (IFV) followed by an M60T battle tank are seen along the M4 highway, which links the northern Syrian provinces of Aleppo and Latakia, before incoming joint Turkish and Russian military patrols (as per an earlier agreed upon cease-fire deal) in the village of al-Nayrab, about 14 kilometers southeast of the city of Idlib and 7 kilometers west of Saraqib in northwestern Syria, March 15, 2020. (AFP)
by DAILY SABAH Mar 15, 2020 12:11 pm
RECOMMENDED

Joint Turkish-Russian patrols were completed on Sunday in the province of Idlib in northwestern Syria as part of a recent cease-fire deal between the two guarantor countries working toward maintaining peace in the key border region, the Turkish Defense Ministry said.

Following the initial reports on the joint patrol, the Turkish Defense Ministry released a statement on Sunday, stating that the patrol was successfully completed.

The "1st Turkish-Russian joint land patrol carried on the M4 highway in Idlib, Syria, with the participation of land, air elements," the ministry wrote in a tweet on Sunday.

The Russian Defense Ministry released a statement shortly afterward, claiming that the joint patrols were interrupted due to provocations.

"To carry out provocations, terrorists were trying to use civilians as a human shield," the Russian Defense Ministry said, adding that Ankara had been given more time to "neutralize the rebels" who orchestrated the provocation.

The Russian military police who participated in the joint patrol are planning to carry out more joint patrols with Turkey on a regular basis, according to the Rossiya 24 TV channel.

A Russian delegation arrived in Ankara on Tuesday to discuss the finer details of the deal.

The official said talks with the Russians had been "positive" and that the first joint patrol would be held on Sunday as planned, adding that groups aiming to interrupt these efforts would be responded to with the measures necessary.

During the previous meetings of the Turkish and Russian delegations, Russia reportedly proposed a map that moves the Sochi deal borders north of the strategic M4 and M5 highways, thus putting 60% of Idlib under regime control. However, Turkey said it will make no concessions on its observation points. Along with many European officials and the U.N, Ankara is concerned about the civilian displacement in Idlib due to regime operations, which could trigger a new mass exodus to the Turkish border and Western countries.

Turkey launched Operation Spring Shield on Feb. 27 after at least 34 Turkish soldiers were killed in an Assad regime airstrike in Idlib province and after repeated violations of previous cease-fires.

The highway was a passageway for the crossing of wheat and cotton from the Syrian east and north to the rest of the country. It was also a road used for the exchange of commodities with regional trade partners.
The Sochi agreement was reached on Sept. 17, 2018, by President Recep Tayyip Erdoğan and his Russian counterpart Vladimir Putin. According to the agreement, the cease-fire in the Idlib region would be preserved, with the withdrawal of heavy arms and radicals from the region. Yet the regime and its supporters have been violating the agreement by launching frequent attacks inside the territory where acts of aggression are expressly prohibited.