Turkey to not close borders for refugees heading to West 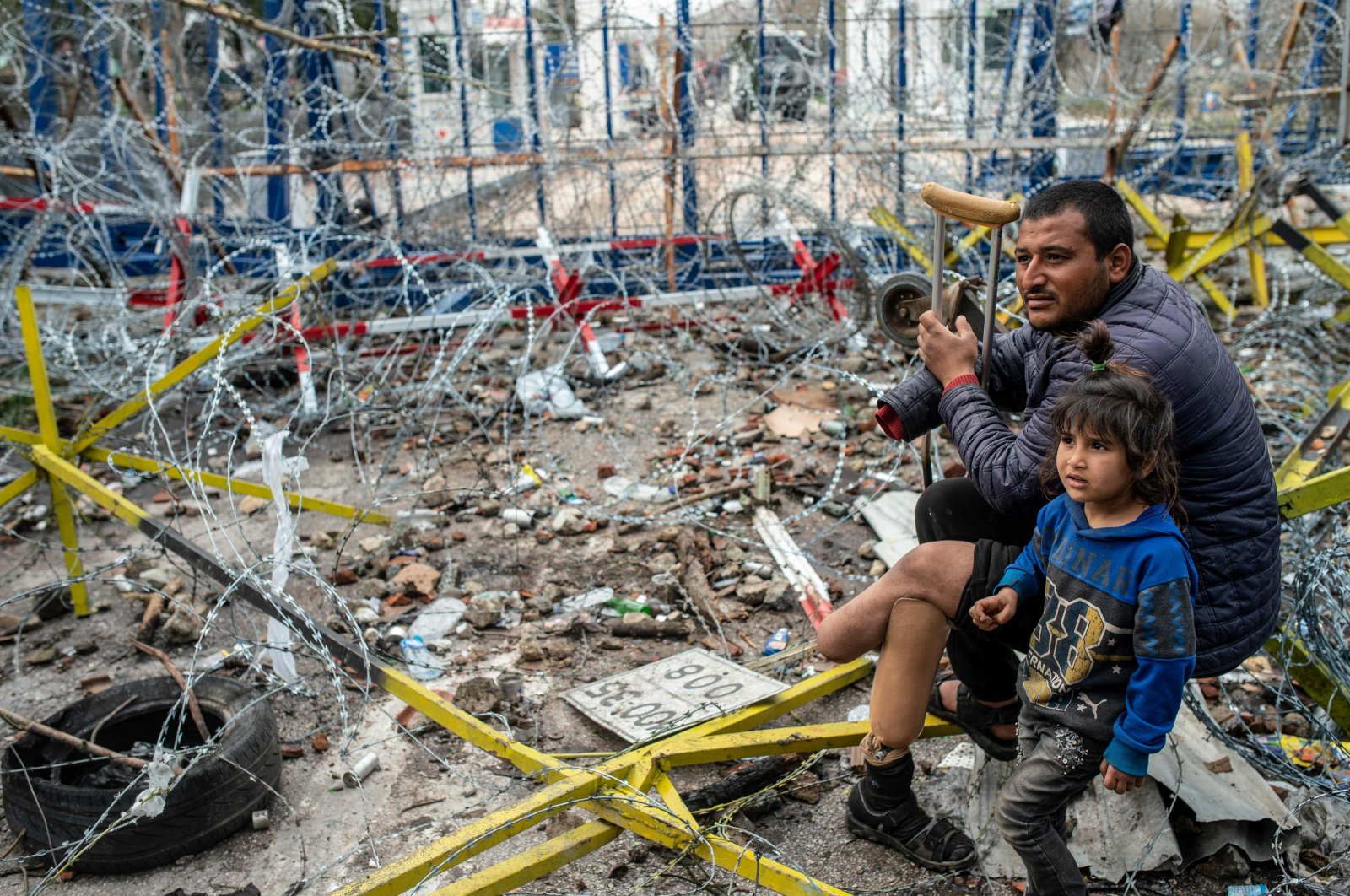 A migrant waits with his child in the buffer zone at the Turkey-Greece border, near the Pazarkule crossing gate in Edirne, Turkey, March 5, 2020. (AFP Photo)
by Meryem Ilayda Atlas Mar 06, 2020 1:29 pm

President Erdoğan stressed that Turkey cannot assist refugees alone and its western borders will stay open. Meanwhile, hopes remain high that the Turkish president's Russia visit will bring concrete results for both the Syrian war and plight of the migrants

The borders to Europe will remain open for migrants passing through Turkey, President Recep Tayyip Erdoğan said Friday. He said the policy is not coercive because leaving Turkey is the refugees’ choice.

“Are the borders open or closed? We don’t have time to discuss it anymore. It is done. Refugees are leaving on their own,” the president told journalists accompanying him on the presidential plane on his way back from an official visit to Russia.

The president added that irregular migration remains one of the most problematic consequences of the Syrian crisis, noting that Turkey can’t handle the influx of refugees alone.

“Assume that all these people (from Idlib) would enter Turkey somehow. This means 5 million to 5.5 million refugees. How could Turkey handle this issue? We had to stop this movement, and (thanks to this agreement), we have managed to do so,” Erdoğan stated.

Delegations from Turkey and Russia, including Erdoğan and Russian President Vladimir Putin, came together on Thursday in Moscow where the two countries agreed to continue their cooperation in the northwestern Syrian province of Idlib after weeks of tension, declaring a cease-fire while expressing an intention to provide a new status quo for the war-torn province. The cease-fire began Friday night.

Speaking on the situation of Turkey’s observation posts, some of which are surrounded by the Bashar Assad regime’s troops, Erdoğan said there is no change in the positions of those military points.

“Currently, there are a total of 12 observation posts. Of course, these posts are of the utmost importance to us. All these will be kept as they are right now,” he said.

The Turkish military has established several observation points across Idlib as part of a de-escalation zone deal reached during the Astana peace process, backed by Turkey, Russia and Iran.

The aim of the observation posts is to establish, monitor and sustain the current cease-fire in the de-escalation zones, deliver humanitarian aid to people in need and to ensure the secure return of displaced people.

The president added that he refused Bulgarian Prime Minister Boyko Borisov’s suggestion to hold a trilateral meeting between Turkey, Greece and Bulgaria due to Greek forces' mistreatment of the migrants trying to cross the border.

“Greece persecutes those people. As far as I follow, they (Greek police) have killed at least five people. In addition to that, they stabbed the rubber boats of migrants to sink them, which is a cruel practice,” Erdoğan noted.

“Those politicians (Greek Prime Minister Kyriakos Mitsotakis) should know that human life is not cheap,” he added.

Reiterating that the 25 million euros ($27.2 million) in aid promised by Germany to be spent for Syrian refugees has yet to be delivered, Erdoğan said the bloc, however, offered a 700 million euros to Greece immediately. “European Commission chief Ursula von der Leyen and European Council President Charles Michel also made some promises. We will see whether we will get results,” he said.

Erdoğan previously said he had proposed to German Chancellor Angela Merkel that Turkey would provide 100 million euros if Europe accepts refugees after the 25-million-euro fund pledged by Germany for the construction of brick houses on the Syrian side of the Idlib-Turkey border was never delivered.

“We should bring press to the areas where those brick houses are built. Our hope is that our Syrian brothers can live in better conditions,” he said.

Russia expected to act on Wagner mercenaries in Libya

Noting that the delegations also elaborated on the latest developments in Libya, Erdoğan said he expects a positive step from Putin regarding the presence of mercenaries from the Russian mercenary firm Wagner.

“(Khalifa) Haftar overtly has an irreconcilable attitude. He doesn’t abide by the agreements; on quite contrary, he incites clashes. The U.S., Germany and Italy also comprehend this situation. We also discussed it with Putin, and I think Mr. President will take a positive step on Wagner,” Erdoğan noted.

Moscow is accused of sending several thousand mercenaries from the private Russian security company Wagner to support Haftar, who controls much of the south and east of Libya. Russia, on the other hand, denies any involvement.