Turkey to protect women's rights at all costs, Erdoğan says 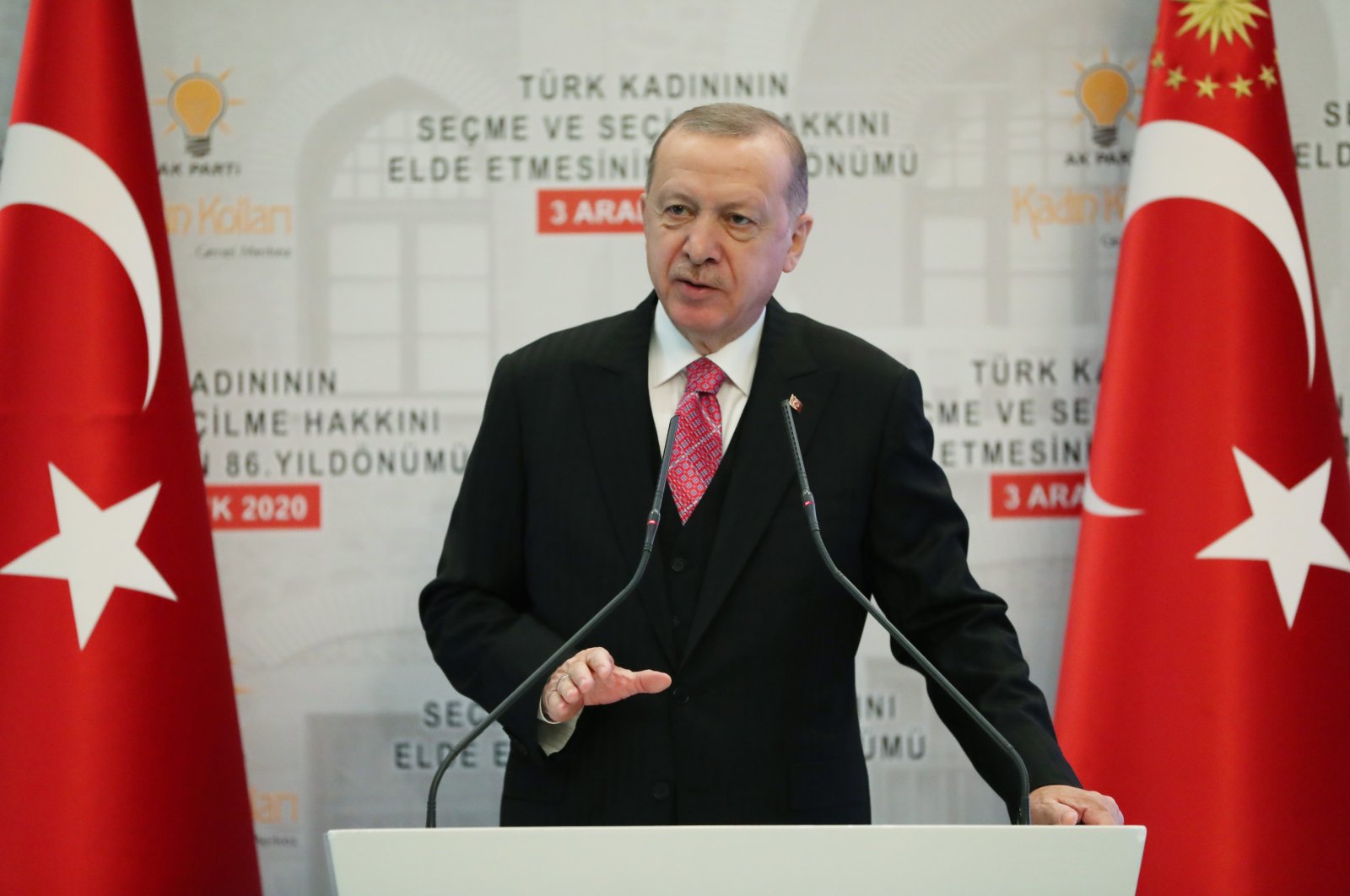 President Erdoğan pledged to work to enhance women's rights in Turkey, as he said everyone needs to stand up against discrimination and injustice

President Recep Tayyip Erdoğan underscored the importance of standing up against gender-based discrimination and said it is the state’s obligation to ensure full protection and equal rights for women. Turkey will continue to take action against everyone who targets their rights, he said.

Speaking at an event organized by the Justice and Development Party’s (AK Party) Women’s Branch, marking the 86th anniversary of Turkish women’s suffrage, Erdoğan said the state is obliged to not only protect the honor of women but also their physical and spiritual well-being.

“Our governments have worked to ensure that women are able to reach their goals in all areas,” Erdoğan said, adding that AK Party governments have also been working hard to prevent domestic violence.

Domestic violence claimed the lives of 932 women between 2016 and 2018. Turkey is striving to eradicate the disturbing phenomenon by increasing prison terms for perpetrators and awareness campaigns denouncing violence against women, the product of a twisted patriarchal mindset. Forty women were killed in the first two months of 2020, according to the latest available data.

Erdoğan noted that the fact that Turkish women received suffrage rights before their European counterparts indicates that it was not forced upon the people but took place as a domestic affair.

“We need to do the same thing today. We have to look at our own historical values and civilization to strengthen the idea of family, which is made up of a woman, a man and children,” Erdoğan said, as he noted that women and men in Turkey have historically shared the same responsibilities and enjoyed the benefits together.

Turkey was one of the first countries to grant women the right to vote in 1934. In 2013, it lifted a ban on headscarves in public places.

The number of female lawmakers is currently at its highest number.

Seventeen female lawmakers entered Parliament after the first elections held after suffrage was granted to women, making up around 4.6% of the total lawmakers.

The AK Party has the highest number of female lawmakers with 54 out of 289, while there are 17 in the main opposition Republican People’s Party (CHP), 23 in the pro-PKK Peoples’ Democratic Party (HDP), four in the Nationalist Movement Party (MHP) and two in the Good Party (IP).

“Whoever it is made against, violence and discrimination are evils that need to be fought,” the president said, noting that it is necessary to take a firm stand against all types of sexual assault, regardless of who the culprit is.

“The CHP administration, which has remained silent about rape allegations and the outcry of its own members, has no say in women’s rights,” Erdoğan said, as he called the party a “catastrophe” in handling the case.

The CHP is accused of covering up sexual assault allegations after a district deputy chair was detained on suspicion of rape, with some members raising their voices against sexual assault among party members.

Maltepe district Deputy Chairperson Umut Karagöz was arrested after being accused of sexually assaulting a 23-year-old woman in a washroom last month.

Former CHP lawmaker Barış Yarkadaş claimed in a series of tweets that similar incidents have taken place in other districts of Istanbul, including Ümraniye and Sultangazi.