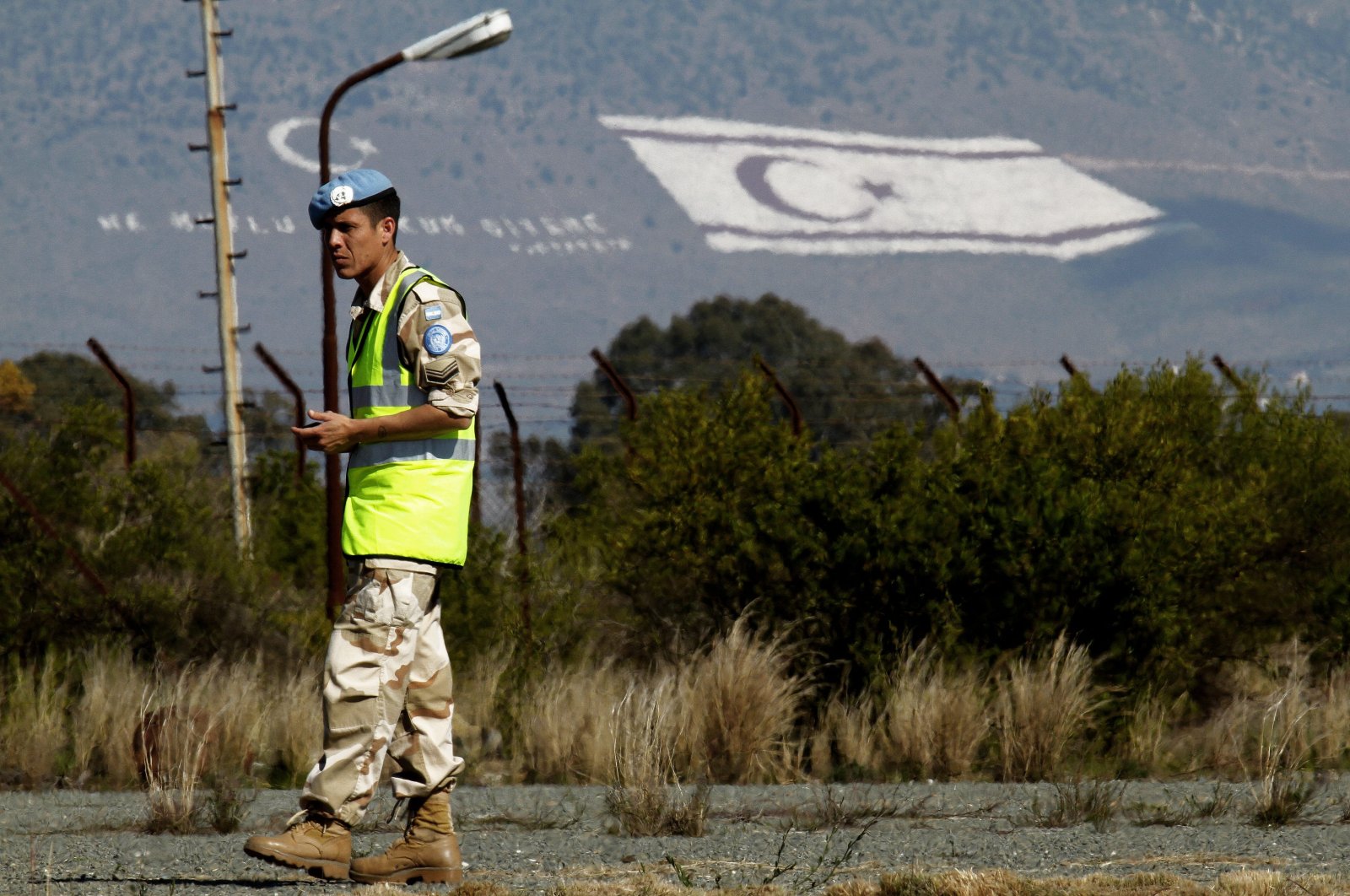 An Argentinean U.N. peacekeeper stands guard in front of a Turkish flag (L) and the flag of the Turkish Republic of Northern Cyprus (TRNC) painted on the face of the Pentadaktilos mountain range, northern Cyprus, Feb. 11, 2014. (AP Photo)
by DAILY SABAH WITH AA Jul 29, 2020 11:31 am
RECOMMENDED

Turkey and the Turkish Republic of Northern Cyprus (TRNC) late Tuesday slammed a decision by the United Nations Security Council (UNSC) that extended the mandate of a peacekeeping force on the island of Cyprus.

The Turkish Foreign Ministry said extending the mandate for six months, unanimously adopting Resolution 2537 (2020) without the consent of Turkish Cypriots, is against the rules and principles of the U.N.

The U.N. Peacekeeping Force in Cyprus (UNFICYP) needs to make a legal arrangement with Turkish Cypriot authorities regarding its presence on the island, the foreign ministry said.

Turkey reiterated that despite legal deficiencies, the UNFICYP continues its activities on the island only through the well-intentioned approach of the TRNC, and Ankara supports the statement of the Foreign Ministry of the TRNC on the issue.

Ankara also pointed out the Security Council's inconsistent approach, as the U.N. body calls for cooperation between the two parties on the island while ignoring the issue of fair sharing of hydrocarbon resources as one of the areas of cooperation.

The ministry said Turkey has repeatedly stressed that the issues related to the Eastern Mediterranean hydrocarbon resources could be resolved through cooperation between the Turkish and Greek Cypriots sides as equal partners on the island.

It added that with the same understanding, it is possible to establish a method of direct contact between the military authorities indicated in the council decision, namely the TRNC Security Forces Command and its Greek equivalent.

The ministry said, as noted in the U.N. secretary-general's last UNFICYP report, the main obstacle for effective cooperation is the Greek Cypriot administration's failure to recognize the TRNC as a valid authority; in other words, it has failed to accept it as an equal partner.

It underlined that the mentality of the Greek Cypriot administration is the reason why efforts for a solution on the island have been inconclusive for more than 50 years.

The ministry also added that biased statements regarding the solution of the Cyprus issue in the decision, unfortunately, encourage the irreconcilable attitude of the Greek side.

The U.N. Peacekeeping Force in Cyprus was established under the UNSC in 1964 to avert a fight between the Greek Cypriots and Turkish Cypriots.

The presence of the force on the island has been long questioned by the Turkish side due to its political and biased approach.

The TRNC’s Foreign Ministry also said that the UNSC has become part of the tension and deadlock on the island, stressing that the decision is political.

It said the U.N. has always avoided making resolute decisions and taking steps, which would introduce accurate and positive results for the island and the region.

The ministry said if the council is really sincere in reducing the tension, it should take some steps to reduce tension in the Eastern Mediterranean and eliminate the crisis of trust in the region.

It also stressed that the UNSC acts unilaterally without the consent of the parties and without complying with the basic principles of the peacekeeping operations.

The ministry added that it is unacceptable that the call of the Turkish Cypriots is continuously ignored.

The decades since have seen several attempts to resolve the Cyprus dispute, all ending in failure. The latest one, held with the participation of the guarantor countries, Turkey, Greece, and the U.K., ended in 2017 in Switzerland.