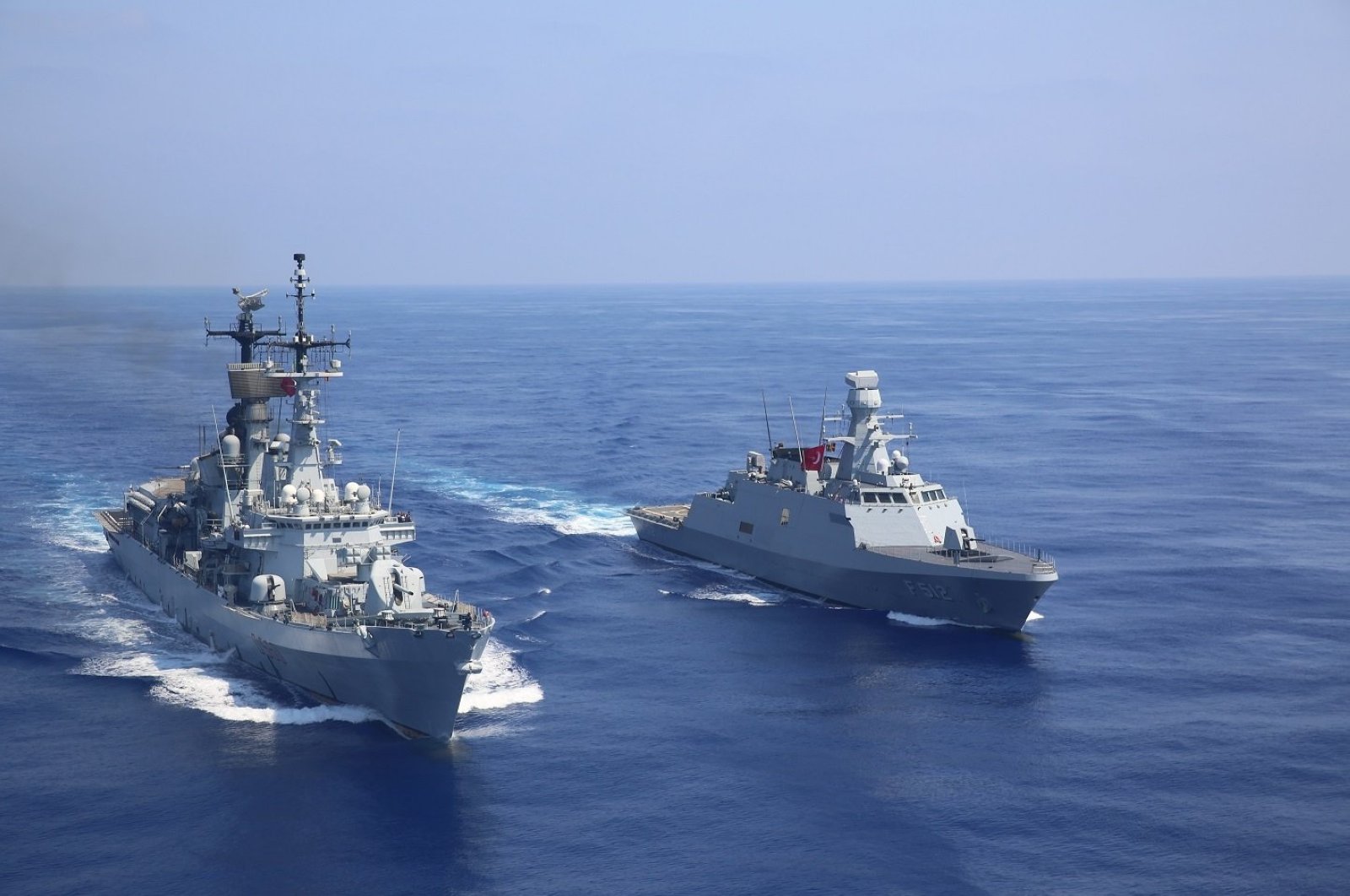 The Defense Ministry announced the conducting of transitional training in the Eastern Mediterranean with ally naval forces, including the Turkish frigate TCG Barbaros and the American destroyer USS Winston S. Churchill, Aug. 31, 2020 (DHA Photo)
by Dilara Aslan Sep 05, 2020 10:11 am

As a signal that Turkey's guarantorship will not falter in the face of escalating tensions in the Eastern Mediterranean and vis-a-vis a containment policy toward Ankara, Turkey and the TRNC have launched joint military drills

Military forces of Turkey and the Turkish Republic of Northern Cyprus (TRNC) launched an annual five-day military drill on Sunday, amid efforts by Greece and other regional actors, including the Greek Cypriot administration and France, to block the two countries' sovereign rights in the Eastern Mediterranean. This move comes at a time of mounting tensions in the region and shows clearly that Turkey will not back down on from guaranteeing the rights of the Turkish Cypriot community, an expert said.

"Regarding its timing, the main message of this military drill is to display that Turkey’s guarantor status toward the TRNC will continue in the face of French and Greek drills," Mesut Hakkı Caşın, a law professor at Istanbul's Yeditepe University told Daily Sabah, indicating that he believes this drill is connected with the conflicts of the Eastern Mediterranean, the Aegean, Libya as well as Syria.

"The fact that Greece is openly supported by France and the European Union while in the background it is also backed by the U.S., which has militarized in recent months the Greek province of Alexandroupolis (Dedeağaç) and Greek islands as well as lifted a decadeslong arms embargo on the Greek Cypriot administration, is the reflection of a containment policy toward Turkey, a NATO member," Caşın added. He elaborated that under the pretext of hydrocarbon reserves, Turkey is being embargoed for its purchase of Russian S-400 air defense systems.

"Yet, Turkey underlined it will not back down in the face of blackmail and gunboat diplomacy," he continued.

The drill in the TRNC – the Martyr Capt. Cengiz Topel Mediterranean Storm Exercise – was named after a Turkish Air Force pilot who was killed during the intercommunal conflict on the island in 1964.

"In the military jargon, the choice of Cengiz Topel for the drill’s name speaks to the fact that Turkey is ready to pay a price and make others pay a price if necessary, while Mediterranean Storm means that Ankara is ready for such a storm, or war," Caşın explained.

Vice President Fuat Oktay on Sunday announced that the joint military exercise had been launched.

"The security priorities of our country and the TRNC along with efforts for a diplomatic solution in the Eastern Mediterranean are essential for us," he said.

"I wish success to our heroic soldiers who are the representatives of our determined will against those who try to box in Turkey in the Gulf of Antalya and ignore the existence of Cypriot Turks," he added.

TRNC Prime Minister Ersin Tatar also announced the beginning of drilling activities Sunday on Twitter. "We support peace, reconciliation, friendship; however, we are also decisive in protecting our rights and the law."

The Turkish Defense Ministry also said in a statement Saturday that the annual exercise is aimed at improving mutual training, cooperation and interoperability between the Turkish Cypriot Peace Force Command and the TRNC Security Forces Command.

The exercise will be held with air, naval and land elements from Turkey, the statement added.

The footage of a joint military exercise conducted by the two countries' military helicopters was recorded by citizens in the city of Girne (Kyrenia). Running the news about the military drills as breaking, the Greek media said: "Turkey responded with a military drill. Turkish helicopters are flying over Kyrenia."

Caşın added that, "French aircraft carrier Charles De Gaulle, having been stationed in the Eastern Mediterranean as a deterrence to Turkey's naval presence and that two NATO members, Greek and France, hold joint drills against Turkey, is unacceptable."

Furthermore, last week, Greece and the U.S. also held military drills south of Crete. The exercise included the participation of a Greek frigate and submarine, as well as F-16 fighter jets, along with American destroyer USS Winston S. Churchill, and navy helicopters from both sides.

Caşın reiterated that Turkey welcomed mediation efforts and supported a fair sharing of rights in the Eastern Mediterranean yet underlined he is of the opinion that the main platform to solve the dangerously escalating tensions in the region was not the EU but NATO with exploratory talks and confidence-building measures.

Caşın said the U.S., France and the European Union are intentionally trying to weaken Turkey by remaining silent in the face of Greek militarization of islands, in violation of international law, as well as through efforts to limit Turkey’s maritime claims and by removing Turkey from the F-35 fighter jet development project.

"If the airspace superiority in the Aegean and the Mediterranean turns to the favor of Greece, this would mean that Turkey is being locked in," he stressed.

"They’re either going to understand the language of politics and diplomacy, or in the field with painful experiences," he said at a hospital’s opening ceremony in Istanbul.

"They are going to understand that Turkey has the political, economic and military power to tear up the immoral maps and documents imposed," Erdoğan added, referring to areas marked by Greece and the Greek Cypriot administration as their economic maritime zones.

He stressed that Turkey was "ready for every possibility and result."

The president’s comments come after NATO said military officers from Greece and Turkey began technical discussions to reduce the risk of armed conflict or accidents.

But Greece later said it had not agreed to the talks, leading to accusations from Turkey that the EU country was shunning dialogue.

Erdoğan added Turkey had repeatedly expressed its willingness to come to a just agreement.

"Our word is sincere," he said. "The problem is those before us disregard our rights and try to situate themselves above us."

Turkey faces a wide range of opponents in the Eastern Mediterranean. France, Italy and the United Arab Emirates (UAE) have all sent forces to join war games with either Greece or the Greek Cypriot administration in recent weeks. Egypt has signed an energy exploration deal with Athens for the Mediterranean.

The European Union, which counts Greece and the Greek Cypriot administration as members, has also threatened possible sanctions against Ankara over its "illegal" actions.

This week, the U.S. announced it was easing a 33-year-old arms embargo against ethnically divided Cyprus.

Erdoğan made it clear that he would not compromise, saying: "Turkey is ready for any kind of sharing (of energy resources) as long as it is fair."

He said fear and panic were the factors behind the alliances being formed and the attitude of intolerance adopted against Turkey.

"The problem here is that the other party is ignoring our rights and trying to put themselves above us," he said.

Greece opposes Turkey's current energy exploration in the Eastern Mediterranean and has been trying to limit Turkish maritime territory based on small islands near the Turkish coast.

Both countries have called on their allies for support, urging the international community to mediate between them.

Turkey has argued that the sides should sit down for dialogue to reach a win-win solution based on the fair sharing of resources.

Turkey, as a guarantor nation for the TRNC, has consistently contested the Greek Cypriot administration's unilateral drilling operations in the Eastern Mediterranean, asserting that the TRNC also has rights to the resources in the region.

Ankara earlier said energy resources near the island of Cyprus must be shared fairly between the Greek Cypriot administration and the TRNC – which has issued Ankara's state oil company Turkish Petroleum (TPAO) a license for exploration.