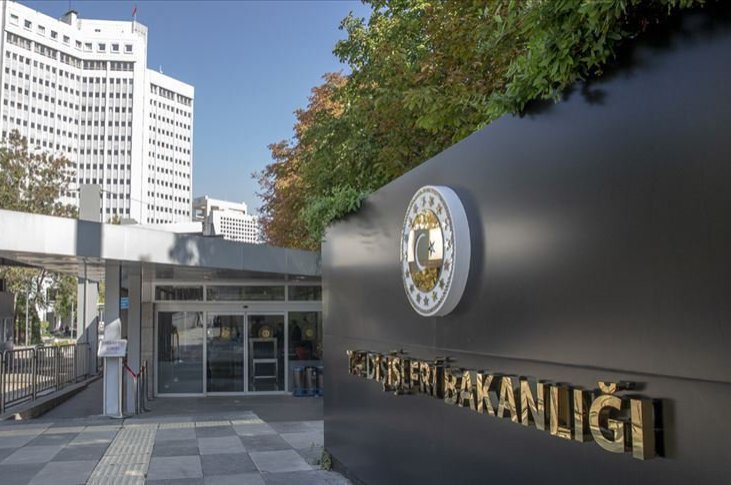 The U.S.'s annual "Country Reports on Human Rights Practices" contains baseless claims, the source of which is not specified, and is far from objectivity, while it is clear the report on Turkey was prepared with political motives, the Turkish Foreign Ministry stated Friday.

Underlining that the Gülen Terrorist Organization (FETÖ) was mentioned as the “Gülen movement” in the March 11 report, the ministry said: “The perpetrator of the July 15 (2016) coup attempt and the terrorist organization that constitutes an existential threat toward our country is tried to be shown as an innocent civilian structuring. This understanding, which shows that the U.S. still does not want to comprehend our fight against this terrorist organization, means to ignore the most basic humanitarian right - the right to life – of hundreds of our citizens who were killed by FETÖ.”

The ministry added that by ignoring the evidence on FETÖ, this year’s report was prepared using claims from Turkey's adversaries.

The report further stated that during Turkey’s Operation Peace Spring, launched to prevent a terrorist corridor in the south of the country and to enable the safe return of Syrian refugees, civilians and civilian infrastructure were targeted.

“There is no explanation for these kinds of claims intended for propaganda and which cannot be verified by independent and acknowledged institutions. Those that have been destroying Syrian cities for the sake of the fight against the Daesh terrorist organization, cannot give lessons to Turkey, which has been showing maximum sensitivity to protect civilians and civilian infrastructure while enabling exemplary stability efforts in operation areas,” the ministry stated. It further reminded that even the international coalition for the fight against Daesh has admitted that at least 1,370 civilians had died as a result of airstrikes conducted until late 2019.

Turkey's Operation Peace Spring cleared terrorists from more than 4,300 square kilometers in northern Syria, supporting the territorial integrity of Syria. Following the liberation of the areas, efforts to clear bombs and improvised explosive devices were launched, and administration duties were given to local councils, while Turkish aid agencies operated widely in the area. According to U.N. numbers, 60% of the people who had been displaced due to the war have returned to their homes.

Turkey has repeatedly voiced that what happens across its southern border, which is also NATO's border, concerns Europe, in addition to NATO's other members, emphasizing that terrorism, conflict and migration threaten the stability of all NATO countries.

Information countering the allegations mentioned in the U.S. report can be found in the United Nations' Universal Periodic Review's (UPR) third cycle statement on Turkey, which was published in October 2019, according to the ministry. “It is noteworthy that not a single concrete piece of data from the UPR, which is the most comprehensive international human rights process document regarding our country, was mentioned in the U.S. report,” it continued.

Turkey has been increasing its efforts to improve and protect human rights recently, launching a new judicial reform package and preparing a human rights action plan.

“Turkey will continue decisively in its reforms, which are based on human rights, democracy and the rule of law,” the ministry's statement concluded.