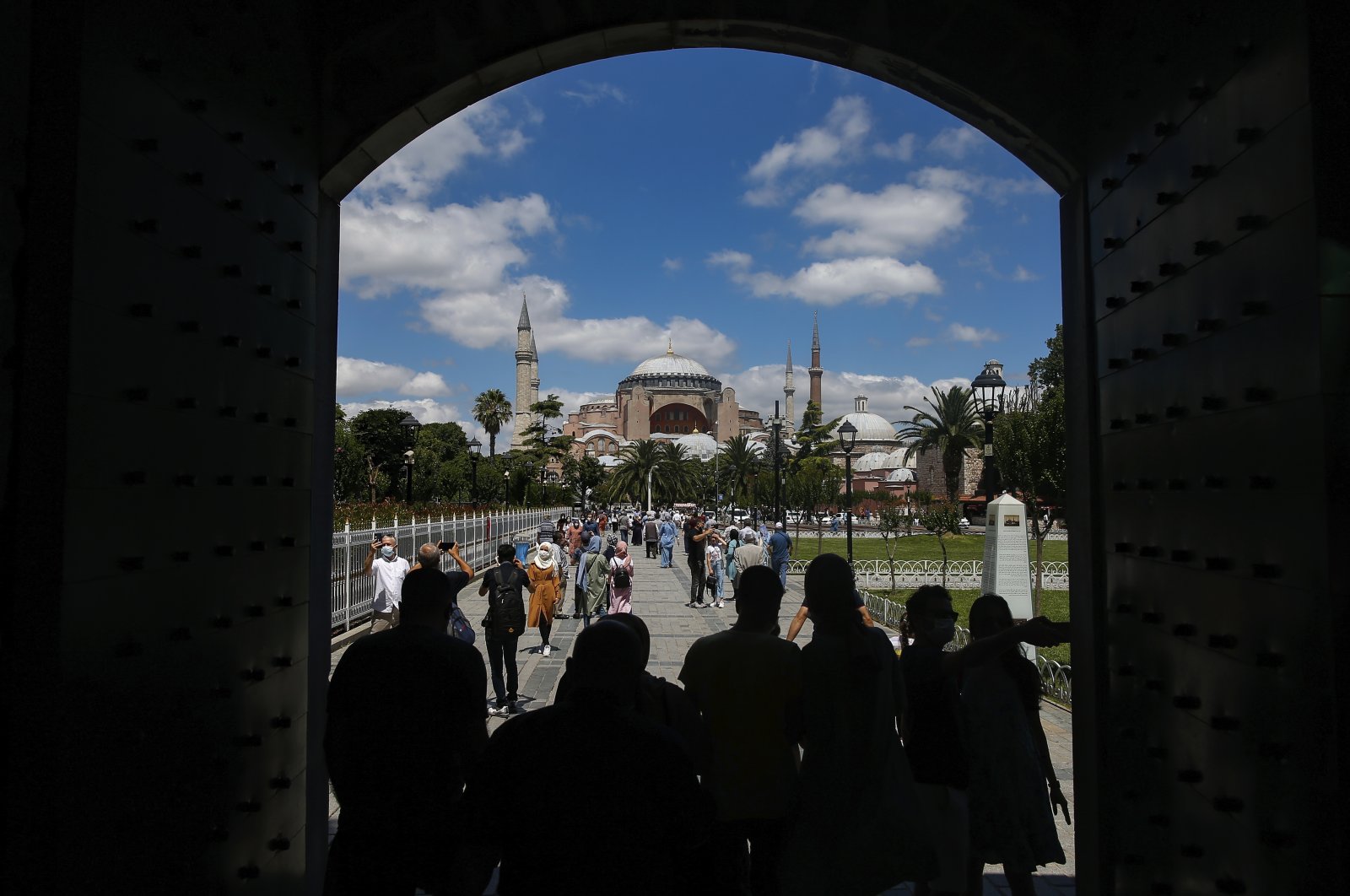 Turkey's decision on the status of the Hagia Sophia is about the rights and wishes of the Turkish nation, the country's president said Saturday.

"We took this decision not by looking at who said what, but rather what our rights are and what our nation wants," Recep Tayyip Erdoğan said in a video address on the opening of the country's highest bridge, the Beğendik Bridge, in the southeastern province of Siirt.

Erdoğan said people who had done nothing "to prevent hostility toward Islam in their countries" were attacking "Turkey's will to exercise its sovereign rights."

Upon the court’s ruling, Erdoğan signed a presidential decree to hand over Hagia Sophia to Turkey's Presidency of Religious Affairs and open it for worship while congratulating the Turkish people.

The court said Hagia Sophia is officially registered as a mosque in its deed, adding that it was decided its use for anything other than a mosque was legally not possible. "The Cabinet decision in 1934 that ended its use as a mosque and defined it as a museum did not comply with laws," it said.

The Permanent Foundations Service to Historical Artifacts and Environment Association, an Istanbul-based nongovernmental organization, had filed a petition at the 10th Chamber of the Council of State seeking annulment of the decision to revert Hagia Sophia into a museum after being a mosque for nearly 500 years.

"As with all other mosques, the doors of Hagia Sophia will be open to all, including Turkish citizens and tourists. We are planning to open the Hagia Sophia Mosque for worship on July 24. Hagia Sophia is under Turkish jurisdiction. Any objection to our judiciary's decision will be perceived as a breach of our sovereignty," Erdoğan said in a speech broadcast live hours after the presidential decree was issued.

Yet despite Turkey’s statements ensuring the Hagia Sophia will be open to everyone equally, the U.S., European Union, Russia and Greece, along with UNESCO, have expressed dismay with the change of status of the site.

The interim secretary-general of the World Council of Churches wrote to Turkey's president expressing his "grief and dismay" over Turkey's decision to change the status of Istanbul's iconic landmark from a museum to a mosque while French Foreign Minister Jean-Yves Le Drian also said France "deplores" Turkey’s decision on Hagia Sophia.

"The integrity of this religious, architectural and historic jewel, a symbol of religious freedom, tolerance and diversity, listed as a UNESCO World Heritage Site, must be preserved," he said, "Hagia Sophia must continue to represent the plurality and diversity of religious heritage, dialogue and tolerance."

Similarly, the U.S. said Friday it was "disappointed" by Turkey's decision. "We understand the Turkish government remains committed to maintaining access to the Hagia Sophia for all visitors and look forward to hearing its plans for continued stewardship of the Hagia Sophia to ensure it remains accessible without impediment for all," State Department spokeswoman Morgan Ortagus said. Democratic presidential candidate Joe Biden also said Friday he deeply regretted Turkey's decision.

Hagia Sophia, one of the world’s most important historical and cultural heritage sites, was built in the sixth century during the reign of the Byzantine Empire and served as the seat of the Greek Orthodox Church. It was converted into an imperial mosque with the Ottoman conquest of Istanbul in 1453. The structure was converted into a museum in 1935, but there had recently been a public push to revert it to a mosque.