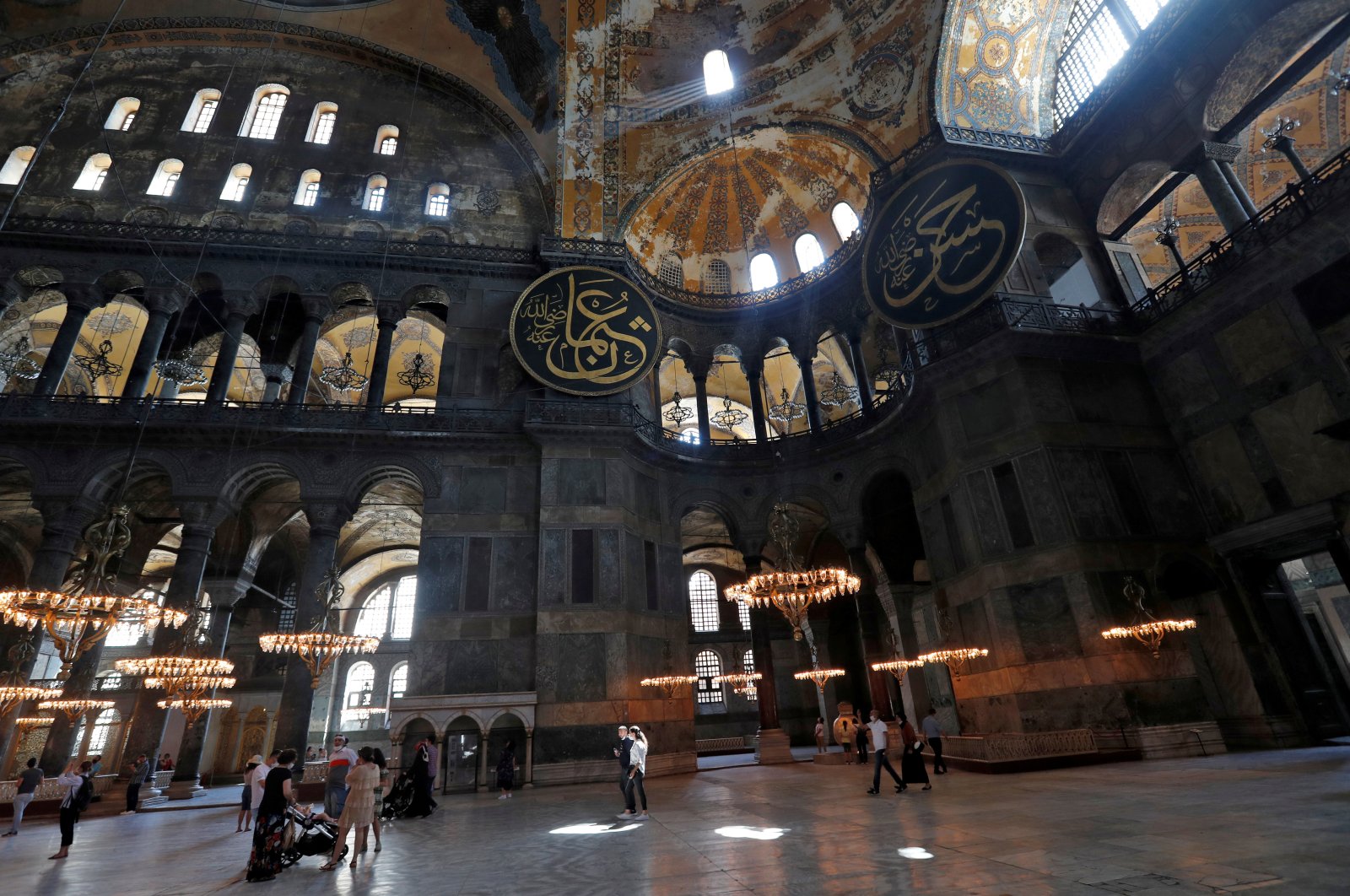 People visit Hagia Sophia or Ayasofya, a UNESCO World Heritage Site, which was a Byzantine cathedral before being converted into a mosque and is now a museum, in Istanbul, Turkey, June 30, 2020. (Reuters File Photo)
by DAILY SABAH WITH AGENCIES Jul 02, 2020 10:10 am
Edited By Eralp Yarar
RECOMMENDED

Turkey's top administrative court Council of State on Thursday completed the hearing on whether Hagia Sophia should remain a museum or be turned into a mosque and will deliver a written verdict within 15 days.

The court heard arguments by lawyers for a group devoted to reverting Hagia Sophia back into a mosque. The group is pressing for an annulment of the 1934 decision by the Council of Ministers that turned the historic structure into a museum.

The group’s lawyer Selami Karaman said the decision of turning the Hagia Sophia into a museum taken by the Council of Ministers in 1934 was a violation of the law about the private property and should be annulled.

Accordingly, the structure was a private property of Sultan Mehmed II, commonly known as Mehmed the Conqueror, who conquered Istanbul in 1453 and converted the structure into an imperial mosque. The structure should not be used against the will of the endower, he said.

He pointed to a precedent that the court annulled a decision to turn the Kariye Mosque in Istanbul into a museum by the Council of Ministers in 1945.

The 1934 decree was signed by then-President Mustafa Kemal Atatürk, the founder of the modern Turkish republic, before going into effect.

The group’s head İsmail Kandemir and lawyer Karaman also alleged that Atatürk's signature on the decree was invalid.

The prosecutor told the court that the 1934 decision was in line with the law, but added that only the Cabinet had the authority to decide on the iconic Istanbul monument's status. The prosecutor asked the court to drop the case.

A decision is expected within two weeks. The court was reviewing a petition by a local association calling for Hagia Sophia to be reconverted into a mosque.

The Hagia Sophia, one of the world’s most important historical and cultural heritage sites, was built in the sixth century during the reign of Byzantine Empire and served as the seat of the Greek Orthodox Church. It was converted into an imperial mosque with the Ottoman conquest of Istanbul in 1453. The structure was converted into a museum during the strictly secular single-party rule in 1935, but there have been discussions about converting it back to a mosque, with public demand to restore it as a place of worship gaining traction on social media.

While some groups have long been pressing for the structure, which they regard as a Muslim Ottoman legacy, to be converted back into a mosque. Others believe the UNESCO World Heritage site should remain a museum, as a symbol of Christian and Muslim solidarity.

President Recep Tayyip Erdoğan said last month the decision was for the highest administrative court adding: "The necessary steps will be taken following the verdict."

Erdoğan also said last year it was time for Hagia Sophia to become a mosque as it had been a "very big mistake" to convert it into a museum.

Many Turkish groups have campaigned for years for Hagia Sophia's conversion into a mosque as they argue that mosque status would better reflect the identity of Turkey as an overwhelmingly Muslim country and recent polls have shown that most Turks support the change.

Greece closely follows the future of Byzantine heritage in Turkey and is sensitive to the issue as it sees itself as the modern successor to Orthodox Christian Byzantine Empire.

Greek Culture Minister Lina Mendoni, who sent a letter of protest to UNESCO last week, said the move "rekindles national and religious fanaticism" and is an attempt to "diminish the monument's global radiance."

She accused Turkey of using the monument "to serve internal political interests," arguing that only UNESCO had the authority to change Hagia Sophia's status.

Patriarch Bartholomew, the spiritual head of some 300 million Orthodox Christians worldwide and based in Istanbul, said converting it to a mosque would disappoint Christians and would "fracture" East and West.

Most recently, U.S. State Secretary Mike Pompeo waded into the debate Wednesday, urging Turkey to keep Hagia Sophia as a museum. His comments sparked a rebuke from Turkey’s Foreign Ministry, which said Hagia Sophia was a domestic issue of Turkish national sovereignty.

"The Government of Turkey has administered the Hagia Sophia as a museum – officially recognized by UNESCO as part of the Historic Areas of Istanbul World Heritage Site – in an outstanding manner for nearly a century," Pompeo said in a statement that added the museum status should be maintained "as an exemplar of (Turkey's) commitment to respect the faith traditions and diverse history that contributed to the Republic of Turkey and to ensure it remains accessible to all."

The status also allowed people from all over the world to access and reflect upon this "magnificent achievement," he said. "The United States views a change in the status of the Hagia Sophia as diminishing the legacy of this remarkable building and its unsurpassed ability – so rare in the modern world – to serve humanity as a much-needed bridge between those of differing faith traditions and cultures."

The U.S. seeks to continue to work with the Turkish government on a broad range of issues of mutual interest, including the preservation of religious and cultural sites, Pompeo said.

In response, Turkish Foreign Ministry spokesman Hami Aksoy said: "We are shocked at the statement made by the U.S. State Department on Hagia Sophia."

Turkey protects all of its cultural assets, including Hagia Sophia, without any discrimination within the framework of the tradition of tolerance from our culture and history, the statement added.

"Hagia Sophia, situated on our land is the property of Turkey, like all our cultural assets," it said.

Any issue regarding Hagia Sophia is "our internal affair as part of Turkey's sovereign rights," the statement added.

"Naturally everyone is free to express their own opinion. However, it is not for anyone to talk about our sovereign rights in the style of ‘we urge, we demand,'" the statement added.