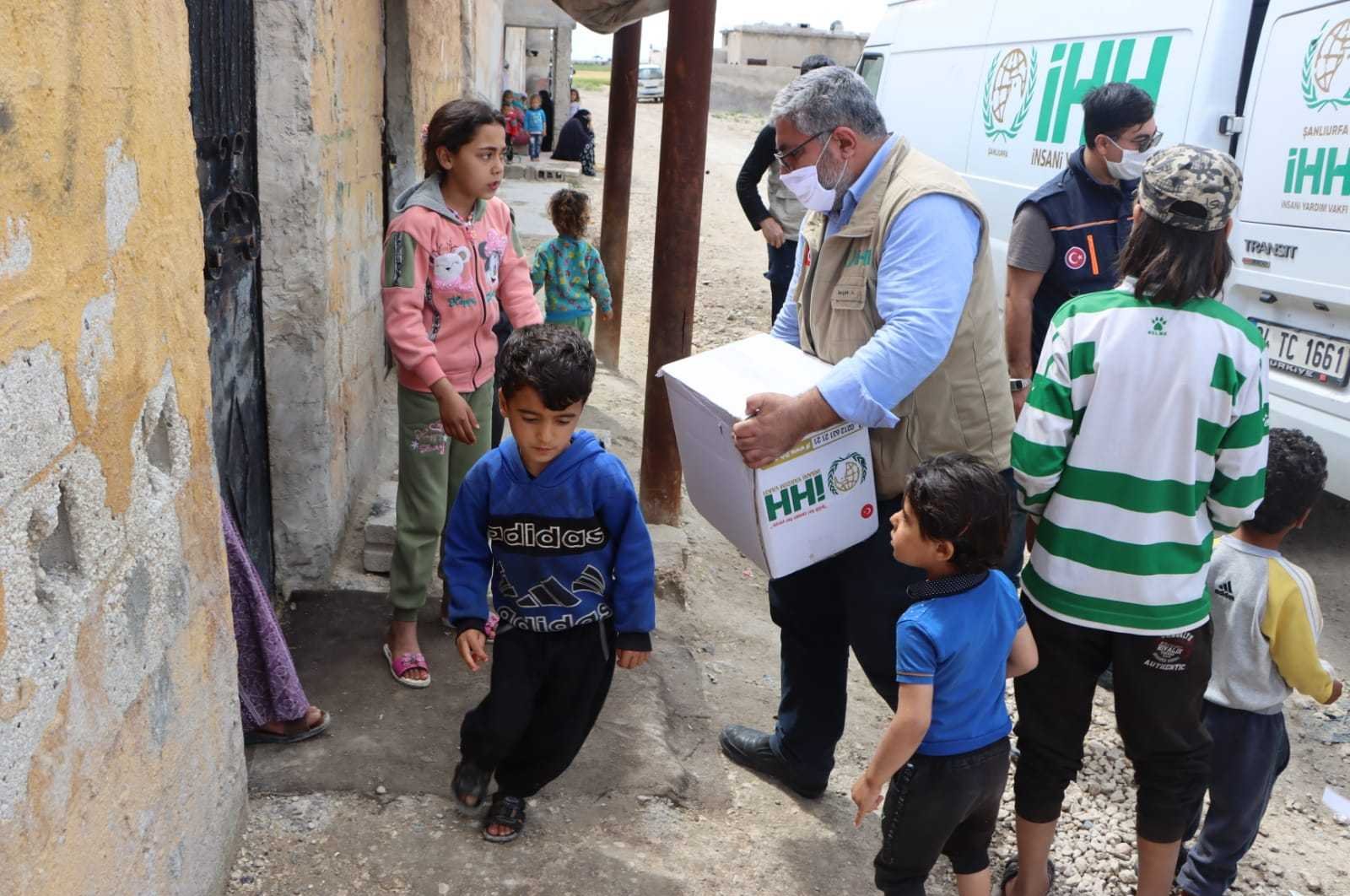 Turkey is providing aid to people in need in the liberated northern Syrian provinces, enabling them to pass the holy Ramadan month with minimum suffering.

According to Anadolu Agency (AA), the humanitarian aid activities, which are organized by the governorship of the southeastern Şanlıurfa province's Syria Support and Coordination Center (SUDKOM), are especially intense in Tal Abyad and Ras al-Ayn provinces.

Both provinces, which were liberated from the terrorist elements through Operation Peace Spring, are known for hosting thousands of Syrians, including the ones who returned to their homeland after living as refugees for years in Turkey.

However, despite their return, the majority of the provinces' populations suffer from poverty, homelessness and unemployment due to the destruction caused by war.

In order to ease the suffering of the locals, various Turkish aid organizations launched mobilization work, intensifying their efforts in the region.

In this respect, the Istanbul-based Humanitarian Relief Foundation (IHH) provided more than 7,000 food packages, 2,500 hygiene products, 3,000 boxes of betel nut, which is part of a Ramadan tradition, 17,000 tons of flour and 13,000 masks to tackle the coronavirus, to the needy in these two provinces. Apart from these items, the organization also provided monetary support worth TL 200,000 ($29,073).

Hayrat Humanitarian Aid Association sent 47,400 pieces of bread, 12,181 food products and 17,500 food packages while other organizations such as Turkey's Diyanet Foundation, Deniz Feneri and Sadakataşı, have also been continuing their aids of food and hygiene packages to the war-torn region.

The head of another organization named Şanlıurfa Human Rights and Liberties Humanitarian Aid Association, Behçet Atilla, said that humanitarian aid activities in the region were mostly being conducted through local branches of the organizations in the provinces.

"The fruitfulness of Ramadan can be felt in here (Ras al-Ayn, Tal Abyad) as it can be felt everywhere else," said Atilla, underlining that donations increased during the holy month.

"The aids are providing major morale and motivation to the people, making them smile," he underlined.

According to Abdullah Toprak, the Şanlıurfa representative of Hayrat Humanitarian Aid Association, despite ongoing aid, the damage caused by the terrorist groups continues to cause difficulties in the region.

"Until the last day of Ramadan, our aid work will continue. We also plan to distribute aid for the Eid al-Fitr (Ramadan Bayram)," Toprak said, emphasizing that even asking about locals is welcomed and appreciated greatly.

Turkey is involved in war-torn Syria to protect civilians and eliminate terrorists and facilitate the return of hundreds of thousands of displaced civilians to their homes. After launching three consecutive operations in northern Syria, Turkey rolled up its sleeves to reconstruct hospitals, schools, mosques and roads destroyed by the YPG/PKK. Within the scope of ameliorating the region's social infrastructure, people were given food and clothing by several nongovernmental organizations while roads and buildings were rebuilt.

Turkey is a country that has gained appreciation around the world by virtue of its efforts to assist Syrians who were forced to leave their homes. Hosting some 3.6 million Syrians and spending billions of dollars on their needs, despite the ongoing conflict, Turkey now looks to establish prosperous settlements and improve the living conditions for Syrians in northern Syria. Its counterterrorism operations across the border into northern Syria have also allowed hundreds of thousands of Syrians in Turkey to resettle in their homeland.