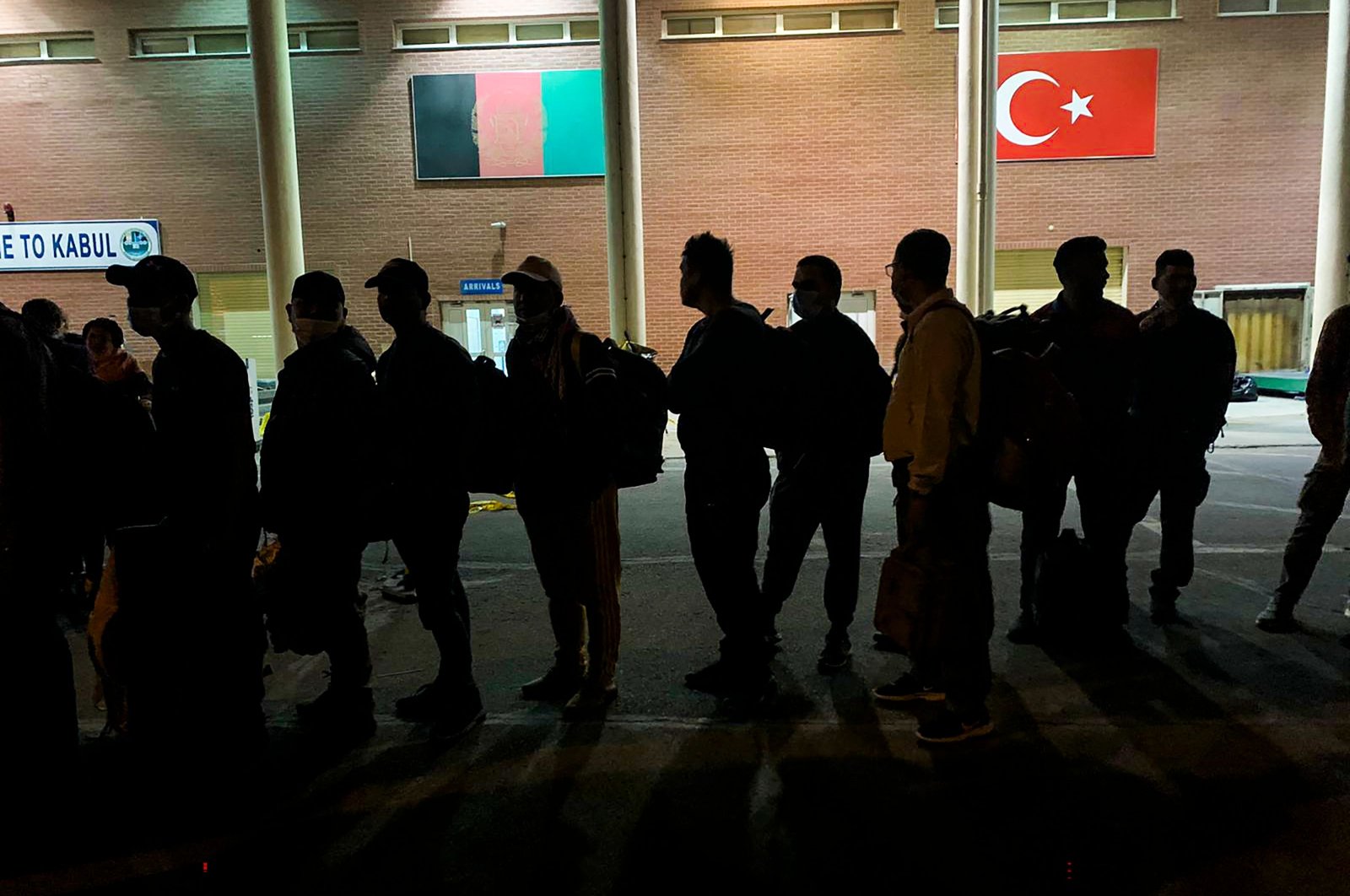 French nationals and their Afghan colleagues line up to board a French military transport plane, for evacuation from Afghanistan after the Taliban's stunning military takeover of the country, at Kabul Hamid Karzai International Airport, Afghanistan, on Aug. 17, 2021. (AP Photo)
by DAILY SABAH WITH AA Aug 17, 2021 9:00 am
RECOMMENDED

Turkish citizens who were evacuated on Monday from Afghanistan after the Taliban took control of the capital Kabul shared their stories, observations and descriptions of the chaotic atmosphere at Kabul Hamid Karzai International Airport, where thousands were desperately waiting, hoping to get out of the country.

The Foreign Ministry launched an evacuation operation to bring back Turkish citizens in Afghanistan and dispatched a Boeing 777-300 ER aircraft to the airport, which returned home at 4:55 p.m. with 324 passengers on board.

Having arrived in Turkey, the evacuees commented on the ongoing developments in Afghanistan and at Kabul airport.

Doğan Özlük, a visiting lecturer at Kabul University, told Anadolu Agency (AA) the Turkish diplomatic mission in the country got in contact with him as the Taliban were approaching Kabul, and he was relocated to a safe zone Sunday.

Noting that there was turmoil at the airport occasionally, Özlük said some of the Afghans attempted to get past the security wall to go abroad, eventually staging a sit-in protest on the airfield.

"There was a delay of several hours, and we observed them. There was not a protest by our plane. We watched them from afar," he said.

Sharing the information his students conveyed to him, Özlük said there were very few clashes in the city center, and Kabul was calm except for banks and the airport where people gathered.

Musa Mutlu, a construction worker, said the Turkish Airlines plane was forced to return to the apron right when it was about to take off as a result of the ongoing turmoil on the airfield.

Mutlu further noted that the Afghans did not get close to the plane, and Turkish soldiers had already taken relevant measures to ensure the flight took place without any problems.

Cem Ayşen, an engineer, said he was living full-time in Afghanistan, but the Taliban entering the capital changed everything.

"Soldiers started coming out of everywhere. Gunshots were heard. Then our company contacted Turkish Airlines. The evacuation planes began coming. We boarded early this morning but waited for three hours in the plane because Afghans were on the airfield to flee," he said.

Noting that the plane could not take off due to the chaos unfolding, he said Turkish troops cleared the field, and it was finally able to fly.

"There was a U.S. cargo plane that took off before we did. Some people fell [from it]. I mean, it was unbelievable," he added, saying the situation was terrible from a humanitarian point of view.

Thousands of Afghans rushed into Kabul’s main airport Monday, some so desperate to escape the Taliban that they held onto a military jet as it took off and plunged to their deaths.

Şenol Çelik, a Turkish official working at the Turkish Embassy in Kabul, said the flight was delayed for about four hours as Afghans were staying in front of the plane.

"We felt sorry for the people there. They were throwing themselves in front of the planes. We have seen such sad scenes," he said.

The crowds came while the Taliban enforced their rule over the capital of 5 million people after a lightning advance across the country that took just over a week to dethrone the country's Western-backed government.