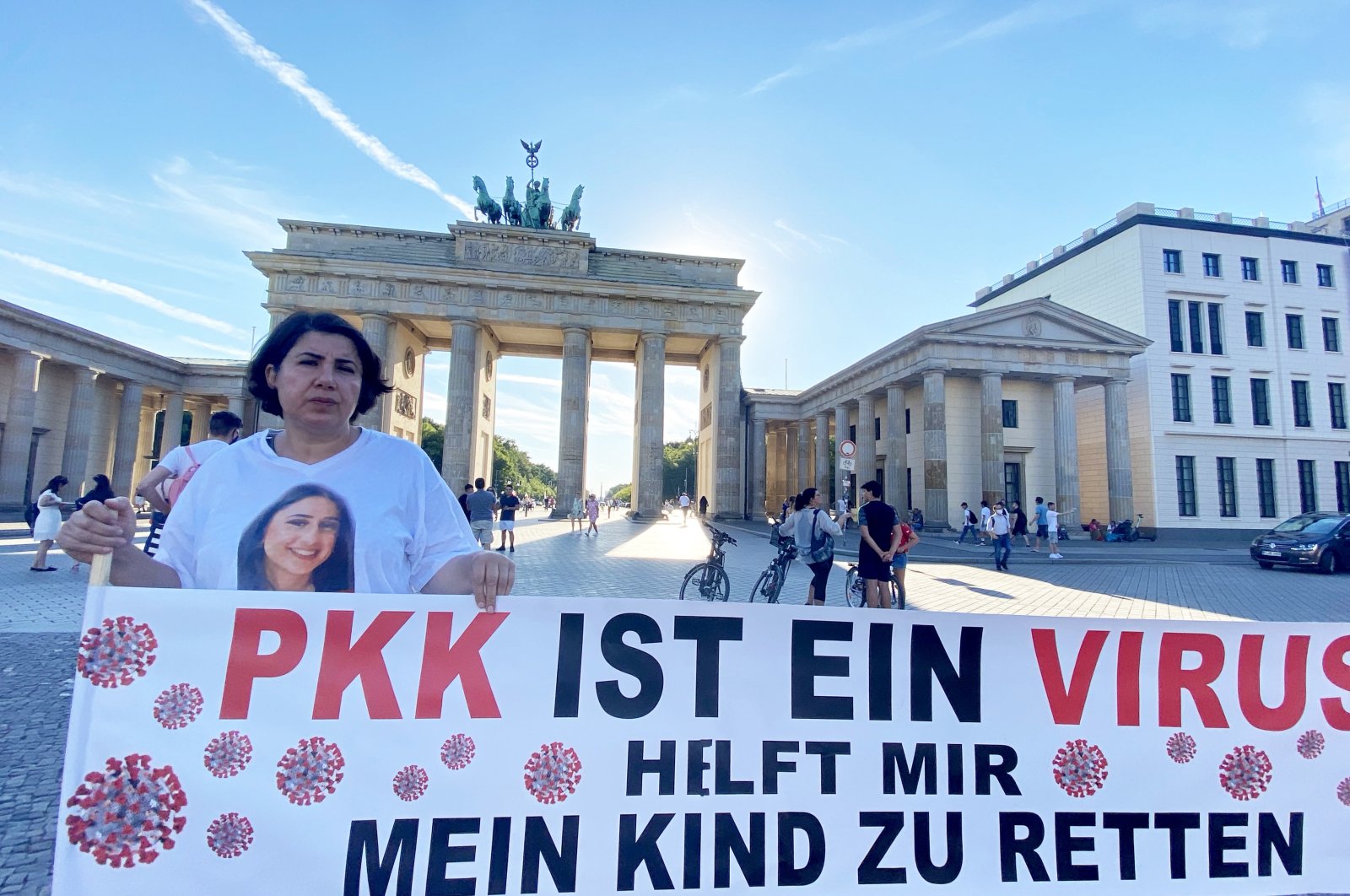 Turkish-German mother Maide T. continues her protest in front of Brandenburg Gate to demand the return of her daughter who was forcibly recruited by the PKK terrorist group in Berlin, Germany on Aug. 5, 2020. (AA Photo)
by DAILY SABAH Aug 06, 2020 2:20 pm
Edited By Gabriela Garver

Maide T., a Turkish-German mother who has been holding protests demanding her daughter's return from PKK terrorists, called on her daughter to come back home in her latest demonstration in front of Berlin's famous Brandenburg Gate

A Turkish-German mother, who has been demanding her daughter’s return from her forced recruitment by the PKK terrorist group, continued her protest in front of the Brandenburg Gate in the capital Berlin.

Wearing a T-shirt that says “PKK is a virus,” the tearful mother Maide T., called on her daughter to return home.

“Please, come to your senses and return home before something worse happens,” she told her daughter Nilüfer T., as she said she hopes that Nilüfer returns home before her birthday on Aug. 10.

“I want to be with her on her birthday. I really want her to return as a birthday present, that would be the biggest gift of all for me, as I find it really difficult to celebrate her birthday without her,” Maide T. added.

A group of people supported the sad mother’s protest by holding placards and posters.

A Berlin resident, Maide has been trying to find her daughter since Nov. 12, when Nilüfer was kidnapped by the PKK. Yet, all her efforts seem to be in vain as German police refuse to help her.

In late May, she called on Chancellor Angela Merkel to help her and held protests in front of the German chancellory.

"If they come under pressure, they will release my daughter within 24 hours," she said, urging German authorities to take action against the group.

In its more than 40-year terror campaign against Turkey, the PKK, listed as a terrorist organization by Turkey, the United States and the European Union, has been responsible for the deaths of nearly 40,000 people, including women, children and infants.

"Unlike mothers in Diyarbakır, I feel lonely in Berlin," she said, underlining that still, nothing is strong enough to make her stop her protests.

"I will not stop until I reach my daughter, my aim," she said.

The sorrowful mother also called on Turkish authorities to bring the issue to the table when they have their next talks with the German authorities.