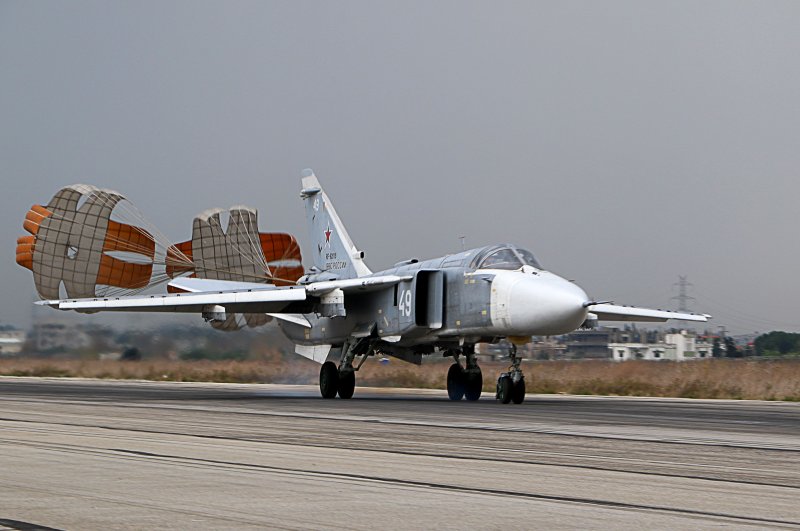 In this file photo taken on Dec. 16, 2015, a Russian Sukhoi Su-24 attack aircraft lands at the Russian Hemeimeem military base in Latakia province, in the northwest of Syria. (AFP Photo)
by Daily Sabah with AA
Mar 01, 2020 3:33 pm

The ministry noted that two air defense systems, including one which earlier downed a Turkish drone, were destroyed. The Turkish Armed Forces continued Sunday to destroy regime targets in Syria, as part of an operation launched in the wake of a deadly regime attack on Turkish troops in Idlib.

According to the new footage shared by Turkey's National Defense Ministry, tanks, armored personnel vehicles and anti-tanks, as well as regime soldiers were killed in Saraqib district, a gateway to northwestern Idlib province, and some other nearby regions.

Meanwhile, it was reported that the regime's air bases outside the villages of Kweiris, Neirab and Menagh were also targeted by the Turkish military. Anadolu Agency (AA) said that following the Turkish military offensive, the air base in Neirab was rendered unusable.

Idlib, near Turkey's southern border, falls within a de-escalation zone laid out in a deal between Turkey and Russia in late 2018. The Syrian regime and its allies have consistently broken terms of the agreement, launching frequent attacks inside the territory where acts of aggression are expressly prohibited.

Turkey called for an immediate halt to the attacks in Idlib and for the cease-fire to be followed, warning that if the attacks do not stop, it will take action.

At least 34 Turkish soldiers were martyred and several more injured in an airstrike by Assad regime forces in Idlib late Thursday. Following the attack, Turkey launched Operation Spring Shield to put an end to regime massacres and to prevent radicalization and migration, according to Turkish National Defense Minister Hulusi Akar.