Turkish statesmen set precedent for people in fight against coronavirus 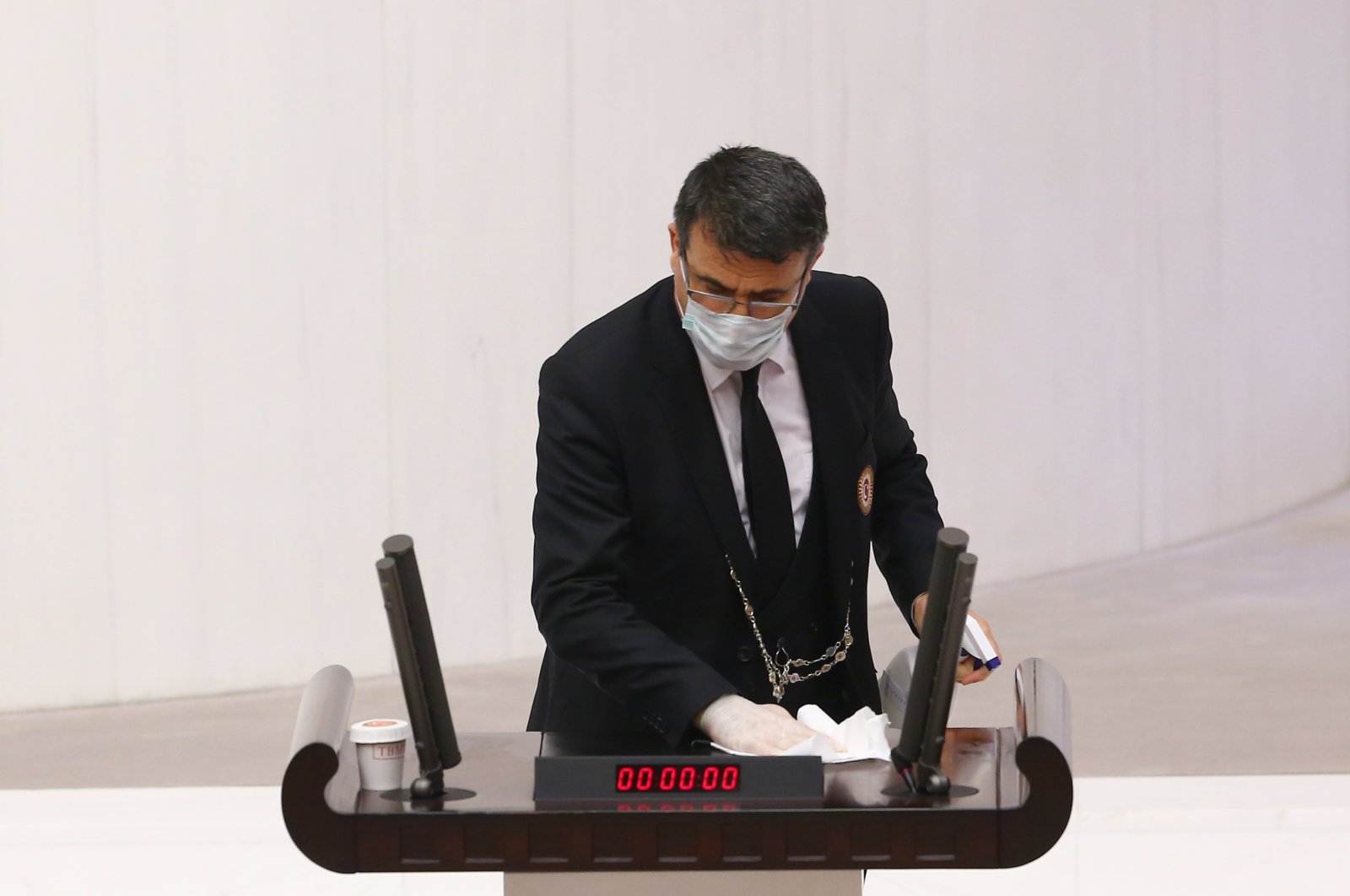 Parliament personnel cleans the stand in between the speech of the deputies during a Turkish parliamentary session, Ankara, Friday, April 10, 2020. (AA)
by DAILY SABAH WITH AA Apr 17, 2020 10:28 am
RECOMMENDED

Turkey's fight against the coronavirus pandemic continues with strict measures in every aspect of life, such as urging people to keep adhering to social distancing rules or the curfew that will occur every weekend until it is no longer needed. State officials are not exempt from these measures as well, as most state functions are being pursued in a digital environment with video calls replacing regular meetings, setting an example for the public in the fight against the pandemic.

"In our state departments, we have doctors all the time and pay extra attention to social distancing. We conduct most of our meetings through video calls," Kalın told NTV news.

Turkey considers protecting its citizens as of vital importance, and that is why Erdoğan decided to provide everyone with masks for free, he said, adding that the country has enough supplies and infrastructure to continue doing this.

Kalın said Erdoğan takes into consideration all of the decisions of Turkey's Science Council, and all steps are taken in the country accordingly.

Last month, Erdoğan set a precedent for both state officials and the public by starting to hold Cabinet meetings via video conference while social distancing himself. Erdoğan's firm stance toward the coronavirus was followed by many other state institutions, particularly in Parliament and the Turkish military.

Parliament issued an entry ban on foreign nationals into the country to help stem the spread of the coronavirus while delaying centennial anniversary events. Also, a new schedule of working hours for parliamentary staff has been announced, with a rotation system in effect. Parliament also installed thermal cameras to detect people who may have contracted COVID-19. Thermal cameras that measure body temperature were placed at three main doors of Parliament.

The Turkish military, on the other hand, has established a center to mitigate the spread of the coronavirus outbreak among its members. The center aims to monitor and manage the measures against the virus in military units and headquarters.

“We have taken all individual and institutional precautions and continue to do so. We have dispatched all equipment, including thermal cameras, to the areas and most importantly, we have given the full prerogative to control the entries and exits to the operation area to our army commander,” Defense Minister Hulusi Akar said last month.

The armed forces are also producing medical masks and sanitizers, Akar said, adding: "We aim to meet the needs of not only the Turkish Armed Forces but all of our people by increasing the production."

The Turkish political scene also has shown ever-increasing concern over the coronavirus and its effects, with parties integrating measures aimed at preventing the virus's spread from interfering with the carrying out of political duties across the country and in Parliament. Political parties represented in Parliament have also canceled group meetings.

Currently, there are 74,193 confirmed cases in Turkey, while 1,643 people have died due to the disease.

The curfew means some 64 million people, or 78% of the entire population, will spend the weekend in their homes. Bakeries, all health care product manufacturers, public and private hospitals, pharmacies, nursing homes and shelters, emergency call centers, designated gas stations and veterinary clinics – one for each population of 50,000, energy companies, postal and cargo delivery companies and animal shelters will remain operational.

Employees of relevant businesses and public servants charged with security are exempt from the curfew, in addition to people attending the funerals of close relatives and scheduled blood and blood plasma donations with the Turkish Red Crescent. Those who do not comply with the curfew will be fined or detained.

Turkey has so far avoided a total lockdown but has ordered anyone above the age of 65 or below the age of 20 to remain at home. Although schools and businesses such as cafes and hairdressers were shut down, many businesses and offices remain open and workers continue to go to work.

Kalın said Turkey is in an advantageous position due to being among the countries that have taken measures and responded to the crisis early.

"When you look at the whole process, we can say that we have managed the process well so far because our citizens adopted these measures. This success is the success of all of us, not just of the person or institution," he said.

"The current global system's fragilities are much more visible now with this (COVID-19)," he added.

With global economies expected to shrink by 6% to 7%, he noted that the SARS virus cost the world $40 billion, and the impact from COVID-19 is expected to be much higher.

"Many economists estimate that COVID-19 will cost the world $3 trillion-$4 trillion. So 2020 will be a year of complete contraction. We have to take this into consideration, but risking human lives due to this in any way is out of the question," the spokesperson expressed.

"There are lessons to be learned. Problems of capitalism and profit- and consumption-oriented systems have shown themselves through this crisis. Chaos and uncertainty are looming, and this should give us the opportunity to think about what really matters in our lives and what our basic needs are," he indicated.

Kalın added that the legitimacy of international organizations such as the World Health Organization (WHO), the United Nations, the G-20, the Organisation of Islamic Cooperation (OIC) and the European Union will be questioned.

"If these organizations fail to create solutions for a crisis such as this, of course, there will be a question of political legitimacy," he added.

The virus that first appeared in China late last year has killed over 145,000 people in 185 countries, according to a Johns Hopkins University tally.

Worldwide infections stand at more than 2 million, with about 550,000 recoveries.