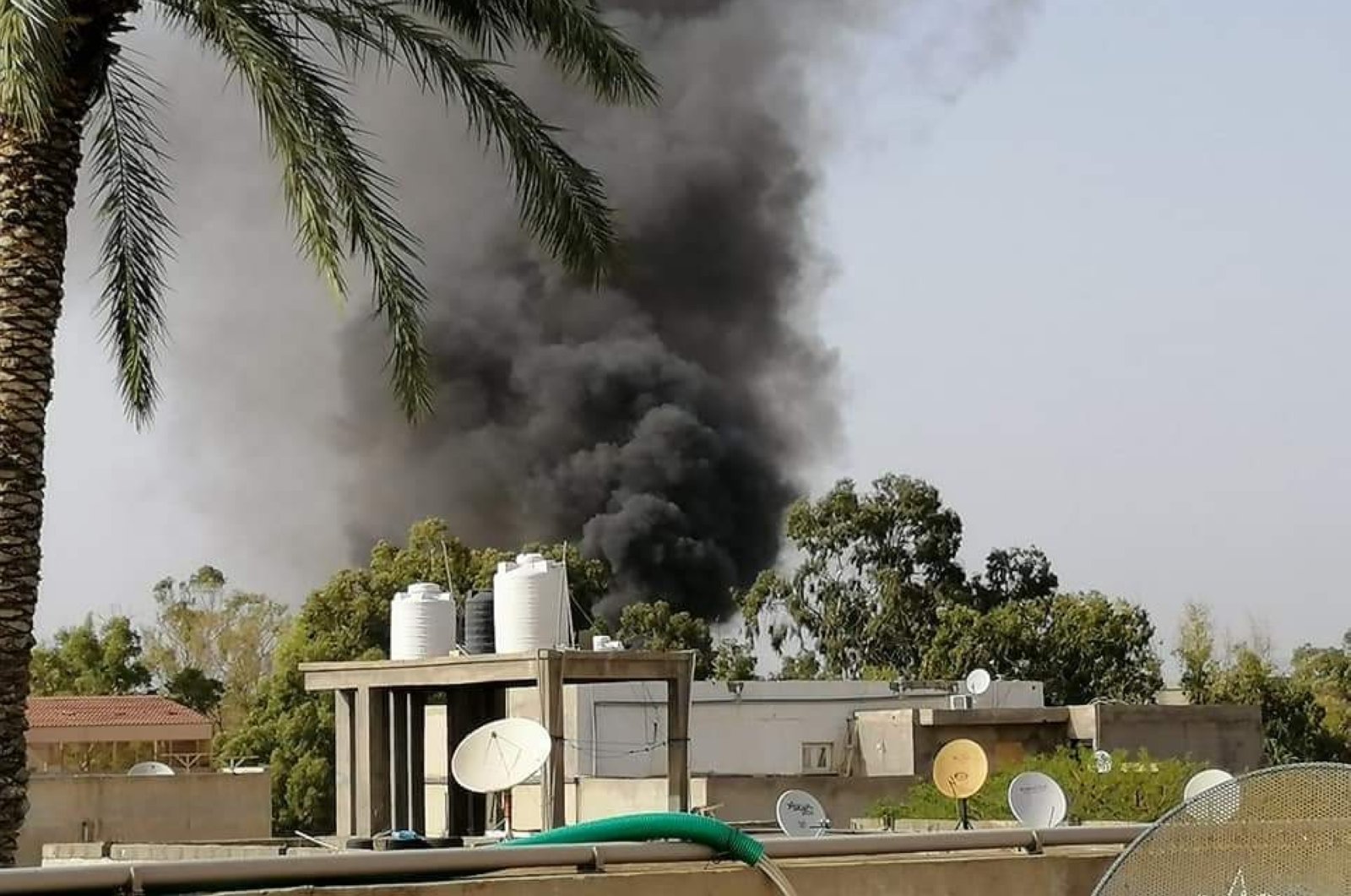 Seven people were killed in an attack by warlord Khalifa Haftar on a shelter for displaced people in Fornaj district, Tripoli, Libya, May 16, 2020. (IHA Photo)
by DAILY SABAH May 17, 2020 12:18 pm
Edited By Dilara Aslan

Two Dubai-based companies have been sending Western mercenaries to support Libya's putschist Gen. Khalifa Haftar in his offensive to capture the capital Tripoli, according to a confidential United Nations report, while the official government has made significant gains in fighting the warlord recently.

A report by a U.N. panel of experts said the foreign mercenaries were affiliated with Lancaster 6 DMCC and Opus Capital Asset Ltd. FZE, both registered at free zones in the United Arab Emirates (UAE), American news outlet Bloomberg reported Friday.

They traveled to Libya in June 2019 for a "well funded private military company operation" to support Haftar's offensive against the Libyan government.

The report was shared with the U.N. Security Council's (UNSC) sanctions committee in February, according to two diplomats who spoke to Bloomberg. They told the news agency that the two companies supplied "Haftar's forces with helicopters, drones and cyber capabilities through a complex web of shell companies."

"The report found that six former military helicopters were acquired and sent to Libya for the project in what it described as non-compliance with a U.N. resolution for an arms embargo on Libya," read the Bloomberg report.

After arriving in Libya in late June 2019, however, the group of 20 people, led by South African national Steve Lodge, "abruptly pulled out a few days later" on two boats to Malta, it added. U.N. investigators said in the report they were unable to determine the reason for the team's exit.

The U.N. report said one of the companies, Lancaster 6, is headed by former Australian air force pilot, Christiaan Durrant. According to the company's website, he worked for Frontier Services Group until 2016, a group founded by Erik Prince, the former head of Blackwater Worldwide, read the Bloomberg report. "There's no suggestion in the report that Prince or any company with which he is affiliated had any role in his former employee's mission," it said.

The Bloomberg report said U.N. officials declined to comment on the matter "as the report is not public." It explained that the Security Council "is not required to take action on the report but members can refer it for investigation in their own countries."

Meanwhile, according to dpa, the German government has approved arms exports worth 331 million euros ($358 million) to countries accused of supporting warring parties in Libya, the Economy Ministry said. Between Jan. 20 and May 3, it approved weapons sales worth 308 million euros to Egypt and 7.7 million euros to the UAE.

Furthermore, a UAE company purchased six helicopters and two boats to raid ships off Libya in a move to support Haftar, a U.N. panel revealed.

According to confidential letters by a panel of experts seen by the Anadolu Agency (AA), under the Security Council's Libya Sanctions Committee, the sale of at least $18 million in military equipment was made through a Jordan-based company that was founded by Fulcrum Holding in the UAE.

A source familiar with the letters, who spoke on condition of anonymity, said the committee got a tip in mid-January that the UAE was trying to fund a special team of mercenaries to back Haftar in Benghazi.

The Fulcrum Holding set up the company allegedly to carry "geographical researches" and used it to purchase three Puma helicopters from South Africa. The helicopters were transported to Jordan and then to Libya.

The source said it was unclear if South Africa's Starlite Aviation company sold the helicopters or mediated the transportation process.

The UAE-based company also purchased three French-built SA 341 attack helicopters from Gabon to deploy to Libya and two 20-person MRC1250 boats via Malta-based Sovereign Charterers for the mercenaries to use.

Against the risk of being noticed by satellite, the source said a logo of the Jordan-based company was stamped on the helicopters and boats to give the impression they were doing "geographical researches."

AA contacted the UAE Permanent Mission to the U.N. but has yet to receive a response.

A member of Libya's Presidential Council has called for severing ties with the UAE amid accusations that the Gulf state is backing Haftar.

In a letter to the U.N.-backed Libyan Government of National Accord (GNA) of Prime Minister Fayez al-Sarraj late Friday, council member Mohamed Amaria Zayed termed the UAE as an "aggressor."

"Maintaining silence to the crimes of this state would mean abandoning the blood of the martyrs," he said in his letter.

Zayed called on Libya's Presidential Council to "take the step to halt the Libyan bloodshed and violation of [Libya]'s border by this state" while urging the Libyan authorities "to pursue the UAE at international courts" and to deal with the Gulf state as an "enemy."

"It is proven beyond doubt that the UAE is involved in shedding the Libyan blood, violating the country's sovereignty by occupying part of its land, establishing military bases, violating our airspace and carrying out airstrikes with the aim of killing Libyan citizens," he said.

The council member went on to accuse the UAE of providing military, political and financial support to Haftar's forces "with the aim of toppling the legitimate government."

Previously this month, the GNA declared three air bases "occupied" by foreign forces. According to GNA military spokesman Mohammed Qanunu, the stations, al-Watiya, al-Jufra and al-Khadim, are being run by foreign countries, including the UAE.

"These bases are run by foreign countries to create chaos in Libya," Qanunu said.

The air bases are used as "launching pads for aircraft bombing civilian targets and state installations, which has killed hundreds of civilians, including children and women, and destroyed schools and hospitals," he added.

The UAE has been under fire recently for supporting chaos in the country by backing warlord Haftar, who has been engaged in an attempt to seize the capital from the U.N.-recognized GNA. Several U.N. and rights groups' reports revealed the country’s activities in Libya.

The death toll rose to seven Saturday after militias loyal to Haftar launched a rocket attack on civilian settlements in Tripoli, according to a government official.

The dead included a 5-year-old boy from Bangladesh, while 17 others were injured, according to Health Ministry spokesman Amin al-Hashimi.

The shelling caused a fire at a shelter in Fornaj district, located near the frontline and home to people forced from their homes after earlier bouts of fighting, Usama Ali, spokesman for Tripoli's emergency and ambulance service, told Reuters.

The U.N. said last month that four-fifths of civilian casualties in Libya's civil war during the first three months of 2020 were attributable to Haftar’s LNA, which is backed by the UAE, Egypt and Russia.

Adding to the pain of civilians, the Libyan warlord has also not refrained from attacking vital hospitals, much needed during the global pandemic. Since January, 17 offensives have been recorded against health facilities in Tripoli and its suburbs, the scene of deadly fighting for over a year, the U.N. mission in Libya said last week.

NATO Secretary-General Jens Stoltenberg, in a phone conversation with the Libyan prime minister on Saturday, confirmed the military alliance's readiness to assist Libya by building its defense and security capacities.

Expressing his concerns over the recent escalation of violence, Stoltenberg stressed the crisis could only be solved by political negotiations, led by the U.N. and involving all parties. The NATO chief reiterated that there is no military solution to the conflict.

He said NATO remained prepared to support the country by developing its defense and security institutions, as had been decided by NATO leaders in 2018 in response to the request of the GNA.

A drone strike by GNA forces on Saturday destroyed a Russian-made Pantsir air defense system deployed by Haftar. According to a statement released by Qanunu, the air elements of the Libyan army targeted the Pantsir system, which was just delivered by the UAE to the key al-Watiya Air Base.

The Libyan Army recently liberated many towns from Haftar’s militia as part of Operation Volcano of Rage. The military then launched a mission to take al-Watiya Air Base, located 140 kilometers (86.9 miles) southeast of Tripoli, from Haftar.

Following the ouster of late dictator Moammar Gadhafi in 2011, Libya's legitimate government was founded in 2015 under a U.N.-led political deal.