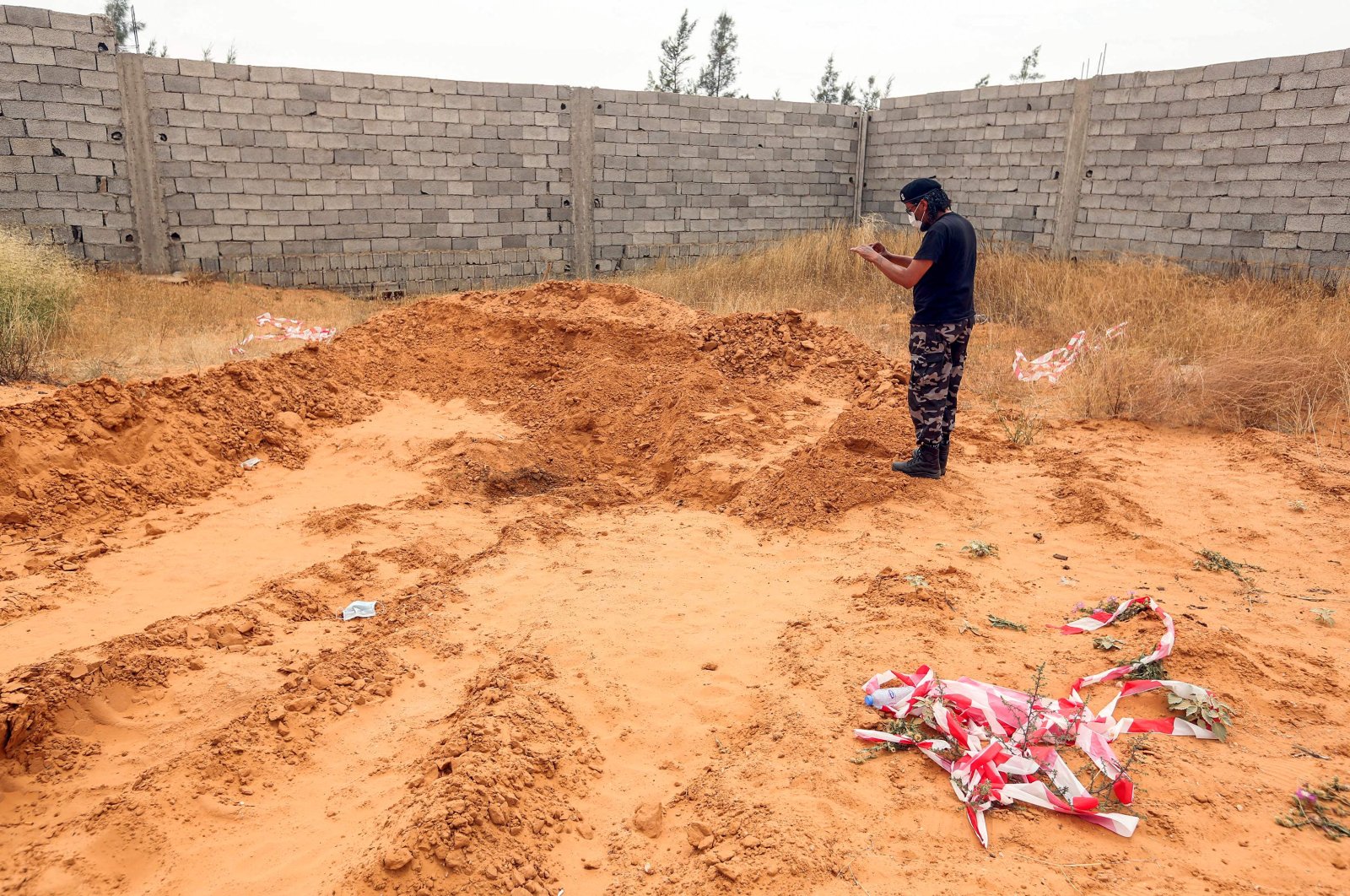 A member of security forces affiliated with the Interior Ministry of Libya's Government of National Accord (GNA) stands at the reported site of a mass grave in Tarhuna, 65 kilometers southeast of capital Tripoli, Libya, June 11, 2020. (AFP Photo)
by ASSOCIATED PRESS Jun 13, 2020 10:09 am
RECOMMENDED

The U.N. chief also called on Libya’s U.N.-supported government to secure the mass graves, identify the victims, establish the causes of death and return the bodies to next of kin. He offered U.N. support in carrying it out, U.N. spokesman Stephane Dujarric said.

The United Nations said earlier Friday that at least eight mass graves have been discovered, mostly in the town of Tarhuna, a key western town that served as a main stronghold for Khalifa’s east-based forces in their 14-month campaign to capture the capital Tripoli.

The discoveries have raised fears about the extent of human rights violations in territories controlled by Haftar’s forces, given the difficulties of documentation in an active war zone.

Philippe Nassif, Amnesty International’s director for the Middle East and North Africa, said the group was working to verify the mass killings.

“We want to be able to go in, or have the U.N. go in, and collect evidence of potential war crimes and other atrocities ... so eventually a process takes place where justice can be served,” he said.

Last week, militias allied with the U.N.-supported government in Tripoli recaptured Tarhuna, some 65 kilometers (41 miles) southeast of the Libyan capital, their latest in a string of battlefield successes that reversed most of Haftar’s gains. Earlier, the government said it regained control of all of Tripoli’s entrance and exit points and Tripoli airport.

Fathi Bashagha, the interior minister in the U.N.-supported government, said earlier this week that authorities were documenting evidence of alleged war crimes in Tarhuna, noting that preliminary reports indicated dozens of victims found in the city’s mass graves had been buried alive.

Bashagha also said that special investigative teams uncovered a shipping container in Tarhuna full of charred bodies, presumably of detainees, and blamed powerful militias loyal to Haftar for “heinous crimes.” A feared Haftar-allied militia called al-Kaniyat, notorious for its targeting of dissenters, had controlled the town.

U.S. Assistant Secretary of State for Near Eastern Affairs David Schenker told reporters on Thursday he was “troubled” by reports that Tripoli forces had discovered bodies of civilians, in addition to land mines and other explosive devices in territory retaken from Haftar’s forces.

Haftar’s offensive is supported by France, Russia, Jordan, the United Arab Emirates and other key Arab countries. The government in Tripoli is backed by Turkey as well as Italy and Qatar.

Schenker said he sees the escalating proxy war between Russia and Turkey in Libya as a challenge to regional stability, as well as a “tragedy for the Libyan people looking for peace and end to foreign intervention.”

Libya is teetering on the brink of a new escalation as Tripoli wages a campaign to recapture the coastal town of Sirte, which would provide access to the country’s vast oil fields under Haftar’s control. The intensified fighting has forced nearly 24,000 people to flee their homes in the last week, according to U.N. humanitarian officials.