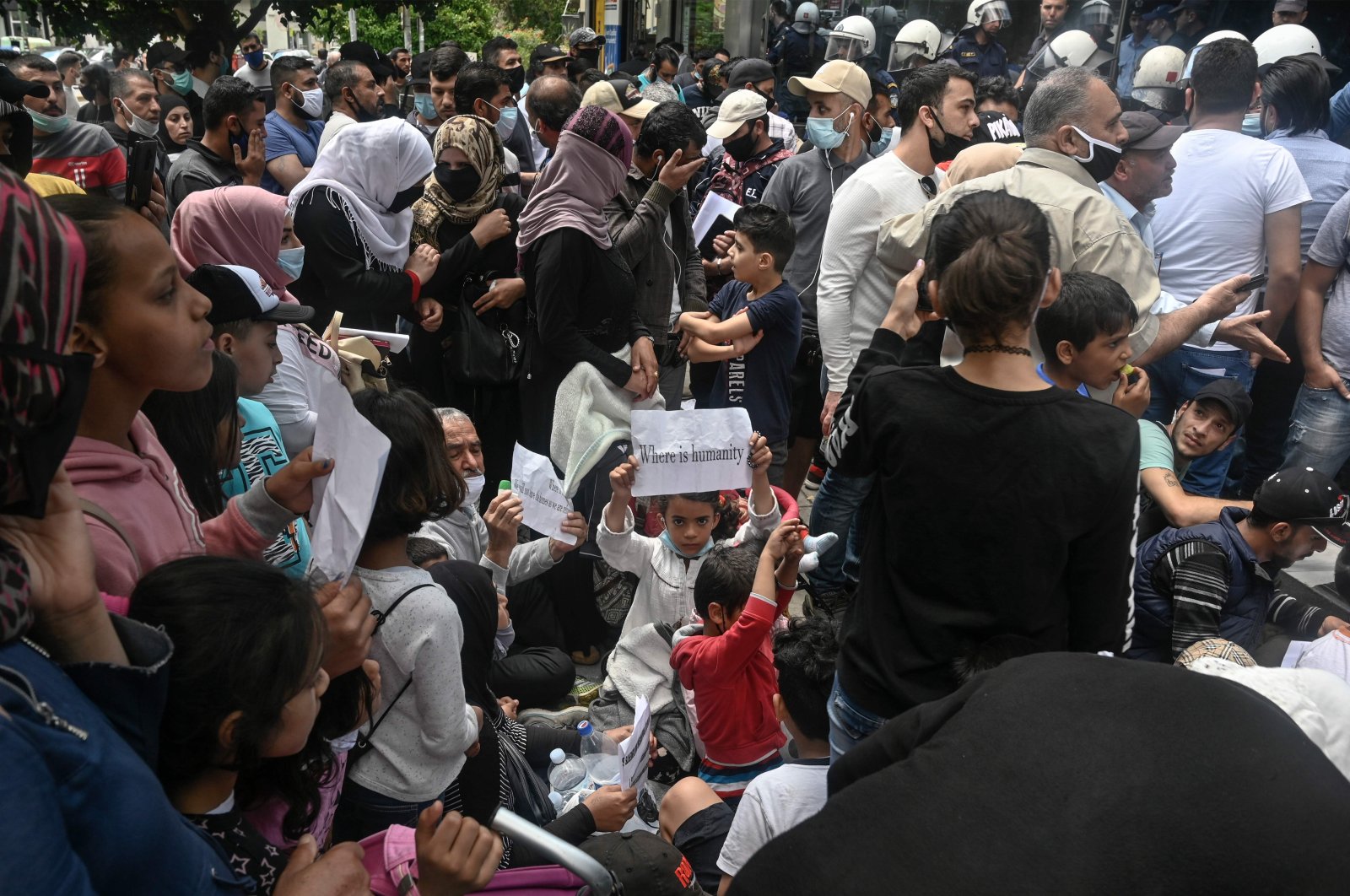 Refugee families holding their asylum documents and a child holding a placard reading 'where is humanity' protest outside the UNHCR offices in Athens, May 29, 2020. (AFP)
by DAILY SABAH WITH AA Jun 03, 2020 11:21 am
RECOMMENDED

The moving of thousands of refugees, some of them from Greek islands to the mainland, could leave many homeless and is deeply concerning, the United Nations High Commissioner for Refugees Agency (UNHCR) said Tuesday.

The UNHCR said that the government-arranged forced exit of some 9,000 recognized refugees from Greece's reception system, which began Monday, is a "premature" move before they have effective access to employment and social welfare schemes.

"Forcing people to leave their accommodation without a safety net and measures to ensure their self-reliance may push many into poverty and homelessness," warned UNHCR spokesperson Andrej Mahecic at the twice-weekly briefing for the media covering the U.N. in Geneva.

Most of the reception facilities being vacated are on Greece's mainland, he said.

The 9,000 recognized refugees are no longer asylum-seekers, and therefore, asked by the Greek authorities to leave the accommodation facilities they are currently staying in.

"Recognized refugees have to vacate much-needed accommodation for asylum-seekers waiting in crowded reception facilities on the Greek Aegean islands. Over 31,000 women, men and children live in five island reception centers with capacity for fewer than 6,000," said Mahecic.

He said, however, the UNHCR has continuously expressed concerns that assistance for many recognized refugees is ending too soon before they have effective access to employment and social welfare schemes foreseen by Greek law.

Tens of thousands of asylum-seekers live in dire conditions in Greek camps. The conditions have worsened recently due to outbreaks of the coronavirus. More than 42,000 people currently live in the overcrowded camps on the Greek islands, including about 5,500 unaccompanied minors. The overcrowded camps on the islands, lacking basic services and hygiene, are a great risk for an outbreak of the virus, which would be difficult to contain.

"The ongoing COVID-19 pandemic and measures to reduce its spread create additional challenges by limiting people's ability to move, and to find work or accommodation," said Mahecic.

"Shifting a problem from the islands to the mainland is not a solution," he added.

Another 11,000 refugees will have to shift from assistance for asylum-seekers to general social welfare, once recognized as refugees by Greece's asylum authorities.

A new law adopted in March 2020 reduces the grace period for recognized refugees from six months to 30 days to transition from organized accommodation and essential support to independent living.

Late February, Greek Prime Minister Kyriakos Mitsotakis stated that Athens would not tolerate any illegal entries of migrants through its borders and would increase its border security. Greece has been the passage for thousands of migrants and asylum-seekers trying to reach Europe for years, however, since March, Athens has built up its security on the border, deploying police and military forces.

The UNHCR urged Greece to increase the national reception capacity at sites, apartments, hotels and cash for shelters.

About 32% of asylum-seekers are Afghans, another 26% are Syrians and Iraqis represent 12% of the population. The nationals of the Democratic Republic of the Congo make up 5% and Pakistan 4%.

"Most of the affected refugees do not have a regular income, many are families with school-aged children, single parents, survivors of violence and others with specific needs," said Mahecic.

Greek security forces have been heavily criticized over the past few months for various human rights violations, especially for rounding up asylum-seekers and forcing them back to Turkey without allowing them to seek asylum, migrants, lawyers and activists have reported.

At least 250 migrants and asylum-seekers have been forced back over the border by Greek security forces since late March, the Border Violence Monitoring Network documented.

Ankara has frequently criticized the practices of the Greek coast guard. Turkey's Coast Guard Command in March slammed their Greek counterparts for leaving migrants at sea helpless by pushing them back into Turkish waters, damaging their boat engines and sinking rubber dinghies.

Greek authorities, despite facing criticism from rights groups for months, have denied allegations regarding their pushing of asylum-seekers out of their borders, as well as beating and even killing many.