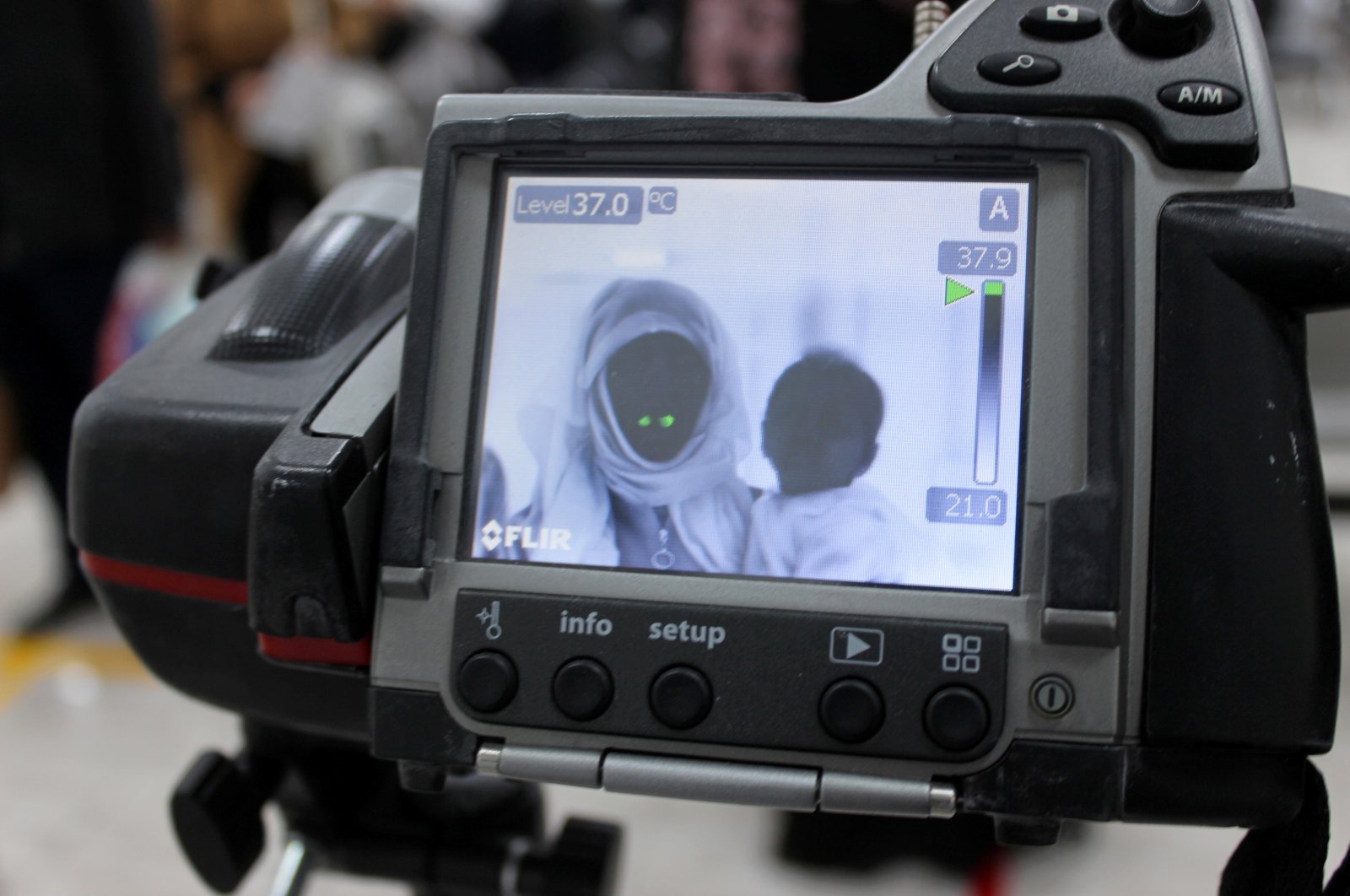 A screen shows passengers' temperature, as part of precautionary measures against the coronavirus, at Misrata international Airport, in Misrata, Libya, March 15, 2020. (REUTERS Photo)
by DAILY SABAH Mar 18, 2020 10:59 am
Edited By Dilara Aslan
RECOMMENDED

The United Nations Support Mission in Libya (UNSMIL) on Tuesday echoed calls from the group's international partners requesting a cessation of hostilities and a halt in the transfer of military equipment and personnel into Libya, to allow local authorities to respond to the unprecedented public health challenge posed by the coronavirus pandemic.

“UNSMIL welcomes and joins the call by international partners on all parties to the Libyan conflict to declare an immediate humanitarian cessation of hostilities,” the mission said in a written statement on their webpage.

“While the UNSMIL continues its efforts in facilitating an inter-Libyan dialogue on the political, military and economic tracks, we urge all parties in Libya to take the bold step in unifying their efforts in facing this pandemic,” it added.

UNSMIL’s statement came after the European Union and eight Western and North African countries called for a cessation of the fighting in Libya earlier Tuesday.

According to a statement released by the U.S. Embassy in Libya, the embassies of Algeria, France, Germany, Italy, the Netherlands, the U.K. and the U.S., along with a delegation of the European Union and the government of Tunisia, "call on all parties in the Libya conflict to declare an immediate, humanitarian cessation of hostilities as well as a halt to the continuing transfer of all military equipment and personnel into Libya in order to allow local authorities to respond to the unprecedented public health challenge posed by COVID-19."

"We express strong hopes that a humanitarian truce will facilitate both Libyan parties’ leadership agreeing to the U.N.-facilitated Feb. 23 draft cease-fire reached in Geneva in the framework of the five-plus-five intra-Libyan Joint Military Commission and returning to political dialogue," it added.

The UNSMIL further urged that “COVID-19 has no affiliation and breaks through all frontlines,” calling on all Libyans to join forces to combat this overwhelming, fast-spreading threat, which requires consolidating all resources and efforts for prevention, awareness and the treatment of possible victims.

Meanwhile, the spokesperson for putschist Gen. Khalifa Haftar was put under quarantine on suspicion of having contracted the coronavirus, a Dubai-based TV station reported Wednesday.

According to Al-Arabiya, Ahmed Al-Mismari's quarantine came after a visit to Egypt. Mismari confirmed this on social media, saying he would remain under quarantine for two weeks along with an accompanying delegation.

Clashes occurred once again in the Libyan capital Tripoli on Wednesday between U.N.-recognized Government of National Accord (GNA) forces and militias loyal to Haftar. The violence erupted in Ramla, southern Tripoli, when the GNA began to reinforce troops in the area, a spokesman for the GNA forces said. Three civilians got wounded while there were no casualties.

Conflict in Libya has erupted between two rival factions that emerged following the ousting of late ruler Moammar Gadhafi in 2011 – namely, eastern-based Haftar and the official Government of National Accord (GNA) in Tripoli. Haftar is supported mainly by Egypt and the United Arab Emirates, while the GNA in Tripoli enjoys U.N. and international recognition. Although a cease-fire was reached on Jan. 12 followed by U.N.-led diplomatic negotiations for a peaceful political solution, forces loyal to Haftar have repeatedly violated the truce.