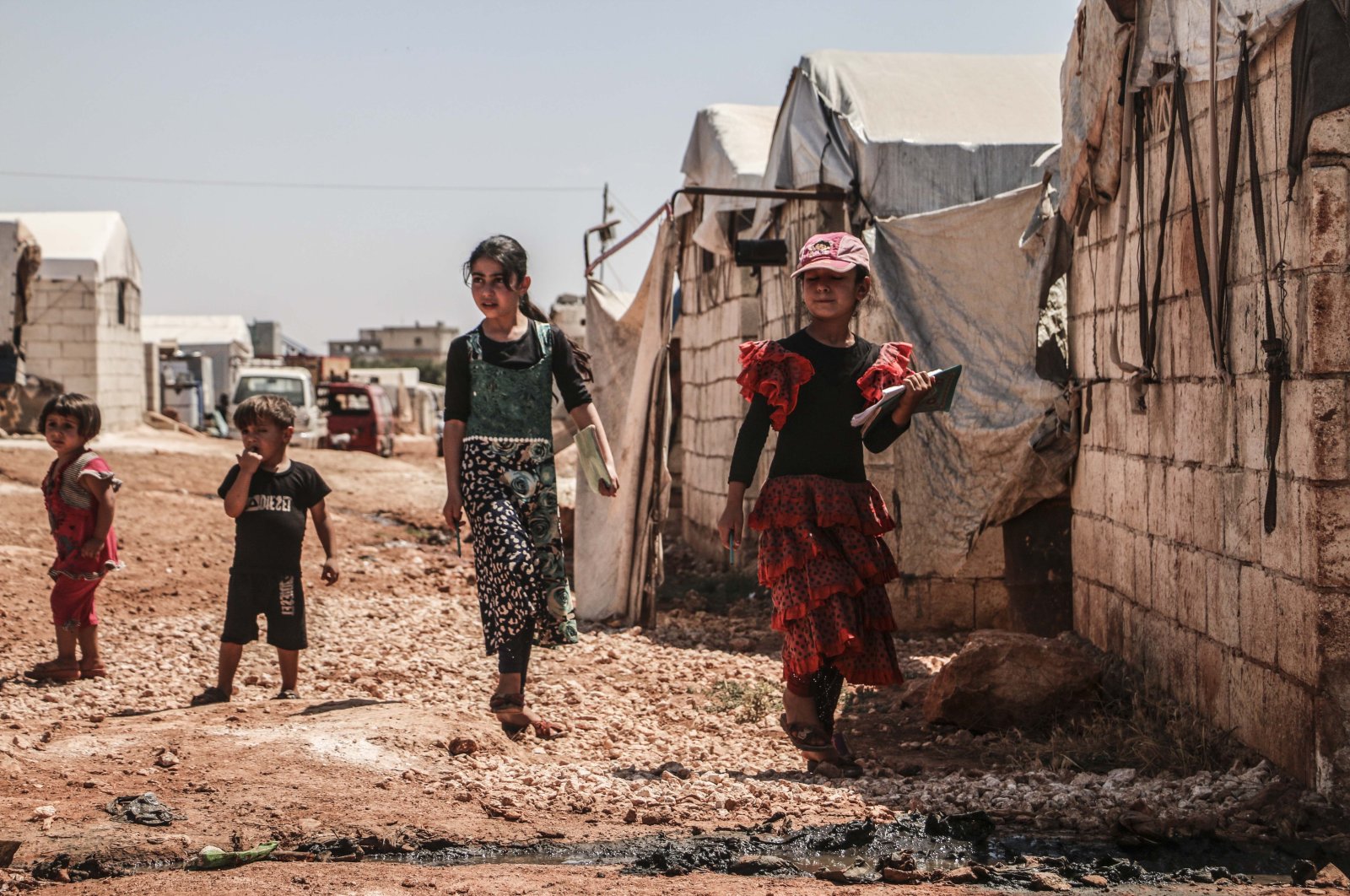 Children are seen in a tent camp, where they live under extremely unhygienic conditions and the containment of the spread of COVID-19 seems almost impossible, in Idlib, Syria, July 7, 2020 (AA Photo)
by DAILY SABAH Jul 07, 2020 12:55 pm
Edited By Dilara Aslan
RECOMMENDED

Millions of Syrians face the risk of being deprived of vital humanitarian aid if Russia, in its heated negotiations with the United Nations, does not back down on its resistance to renewing the mandate allowing cross-border aid operations into northwest Syria.

Since the pact for cross-border aid ends on July 10, the U.N. Security Council (U.N.S.C.) is debating whether operations should continue and for how long. Rights groups are concerned Russia will veto the mandate.

“The cross-border mechanism allows U.N. agencies to deliver aid without the permission of the (Bashar) Assad government, which is critical because the regime consistently blocks aid from reaching opposition-held areas,” the Office for the Coordination of Humanitarian Affairs (OCHA) underlined in a written statement on Monday, adding that U.N. agencies currently reach nearly 3 million civilians in northwest Syria from Turkey each month, many of whom have been displaced by fighting.

In January, Russia scored a victory for its close ally Assad in Syria, using its veto threat to force the Security Council to adopt a resolution reducing the number of crossing points for aid deliveries, from Turkey to the country's northwest, from four to just two. It also cut in half the yearlong mandate that had been in place since cross-border deliveries began in 2014 to six months, as Russia insisted.

Russia has advocated ending all cross-border aid to Syria, arguing it undermines Syria’s sovereignty and that the situation on the ground has changed since the original resolution passed in 2014. U.N. operations being dependent on the regime, however, would aid accelerating Russia’s push for the normalization of the Assad regime and undercut international efforts to foster a lasting settlement to the Syrian conflict.

Indicating that Russia’s position is increasingly clear, the U.N. stressed that the upcoming vote is a test case for China and for new Security Council members like Tunisia and Vietnam.

“Russia will likely attempt to block one of the northwest border crossings and offer another to remain open for just six months. Russia has stated that it intends to dismantle the cross-border mechanism completely by the end of 2020,” it added.

Amid rising malnutrition and food insecurity, and the World Food Programme’s (WFP) warnings of a possible famine in Syria, humanitarian aid is essential as the U.N.'s presence also provides legal cover for many international nongovernmental organizations (NGO) operating in the northwest.

Syria's war has devastated the country's economy since 2011, plunging 80% of its people into poverty, according to the United Nations. For years, many stakeholders have said Assad has ignored the needs and safety of the Syrian people, only eyeing further gains of territory and crushing his opposition. With this aim, the regime has for years bombed vital facilities such as schools, hospitals and residential areas, causing the displacement of half the country’s population. The situation is especially critical in opposition-controlled areas in the northwestern provinces of Aleppo and Idlib, regions the Assad regime has vowed to take back. With almost 50% of the nation's health facilities out of service, the Syrian people are also extremely vulnerable to the coronavirus pandemic.

HRW had previously documented how restrictions on aid from Damascus and Iraq are preventing medical supplies and personnel needed to contain COVID-19’s spread among the millions of people in northern Syria.

“The U.N.S.C. should stand up to Russia and demand inclusion of border crossing from Iraq to Syria in cross-border aid resolution. Should not give in to threats. Syria needs both northwest crossings reauthorized for 12 months plus al-Yarubiyah for the northeast,” Charbonneau continued, once again highlighting that the idea of cross-border aid coming from Damascus would compensate for the other crossings is “wishful thinking.”

Germany and Belgium submitted a draft resolution extending the use of the two crossings in northwest Syria for a period of 12 months and for the reauthorization of the Yarubiyah crossing for six months.

According to the U.N., the impact of Yarubiyah’s closure has been far greater than expected because of the COVID-19 pandemic. The crossing was primarily used by medical agencies to deliver health supplies to the area. Yet between January and May, cross-line operations from Damascus only reached 31% of medical facilities, leaving the region more vulnerable to the spread of the virus.

The risk of an outbreak is especially high and most alarming in Syria's northwest, where overcrowded settlements are teeming with fresh arrivals and many of the displaced are forced to sleep in freezing temperatures in open spaces.

Moreover, the overcrowded camps are unfit for humans during the global pandemic as they are often plagued by poor hygienic conditions and fires that erupt frequently, spreading easily to other tents nearby.

Turkey and Russia had reached a cease-fire agreement in March after the Assad regime launched an offensive on Idlib, vowing to take back the area with Russian support. The attacks displaced nearly 1 million civilians who sought refuge in safe areas near the Turkish border, an incident described by the U.N. as the biggest one-time displacement in the war-torn country since the conflict erupted in 2011.