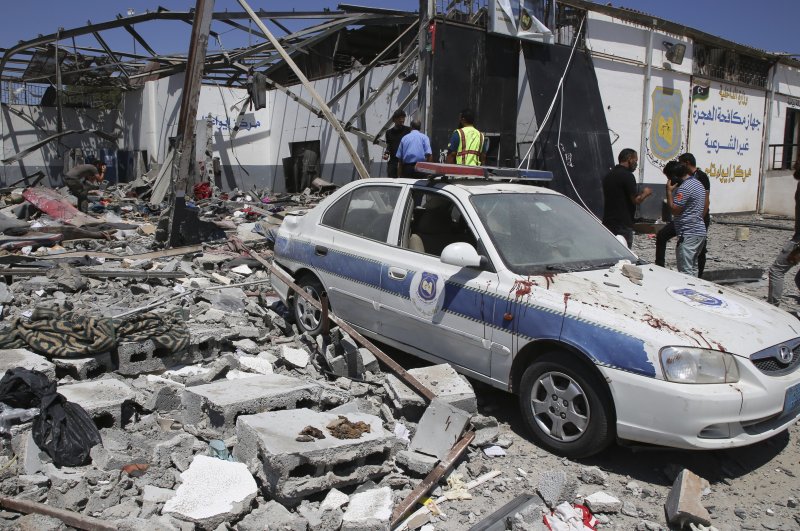 In this July 3, 2019, file photo, debris covers the ground and an emergency vehicle after an airstrike at a detention center in Tajoura, east of Tripoli in Libya. (AP Photo)
by DAILY SABAH Feb 26, 2020 9:50 am
RECOMMENDED

The chairman of Libya’s High Council of State Khalid al-Mishri said the U.N.-sponsored talks on a diplomatic solution to the conflict in Libya, set for Wednesday, are “meaningless” as both sides have announced that they will not attend the meeting.

Al-Mishri told a TV broadcast that 13 representatives were supposed to attend the meeting from each side, but the U.N. Support Mission in Libya (UNSMIL) would pick the representatives after the announcement that neither side would attend the negotiations. He noted that there are allegations that the names picked by the U.N. body favored putschist Gen. Khalifa Haftar.

He said he does not believe a consensus will be reached in the talks without the participation of the authorities.

“We insist (on) a refusal of the military means and preserving a civilian state,” he said, adding that they will not make concessions on some conditions they deem vital. He noted that Haftar’s forces insist on a military solution and reject political dialogue.

“The only language he understands is the language of power. We may hold talks with deputies to reach political dialogue, but there is no dialogue with Haftar,” he added.

The U.N.'s Libya mission and world powers on Tuesday urged the country's warring parties to engage in peace efforts, as doubts hung over talks set to start the next day in Geneva.

The negotiations are supposed to gather delegates from a Tripoli-based internationally recognized Government of National Accord (GNA) and representatives of the eastern-based Haftar, who is leading a monthslong offensive to seize the capital.

Both sides had said Monday they would not take part in the negotiations in Switzerland, citing different reasons.

Haftar forces said UNSMIL had not approved all of its representatives.

Meanwhile, the High State Council of the GNA said it would not participate in the talks until progress was made in military negotiations.

Political sources in Tripoli and the eastern city of Benghazi told AFP that U.N. officials were working to salvage the talks and persuade both sides to take part.

Five western powers and the European Union also voiced support for the talks.

"The embassies of France, Germany, Italy, the United Kingdom and the United States (as well as the EU mission) welcome the considerable progress in the UN-facilitated talks in Geneva toward a lasting ceasefire in Libya," they said in a joint statement.

"We call on all parties to reject obstructionism and engage in good faith as Libya moves forward with its democratic transition," the statement said.

On Jan. 12, the parties to the conflict announced a cease-fire in response to a joint call by Turkey and Russia.

Talks for a permanent cease-fire, hosted by Russia on Jan. 14, proved inconclusive after Haftar left Moscow without signing a deal.