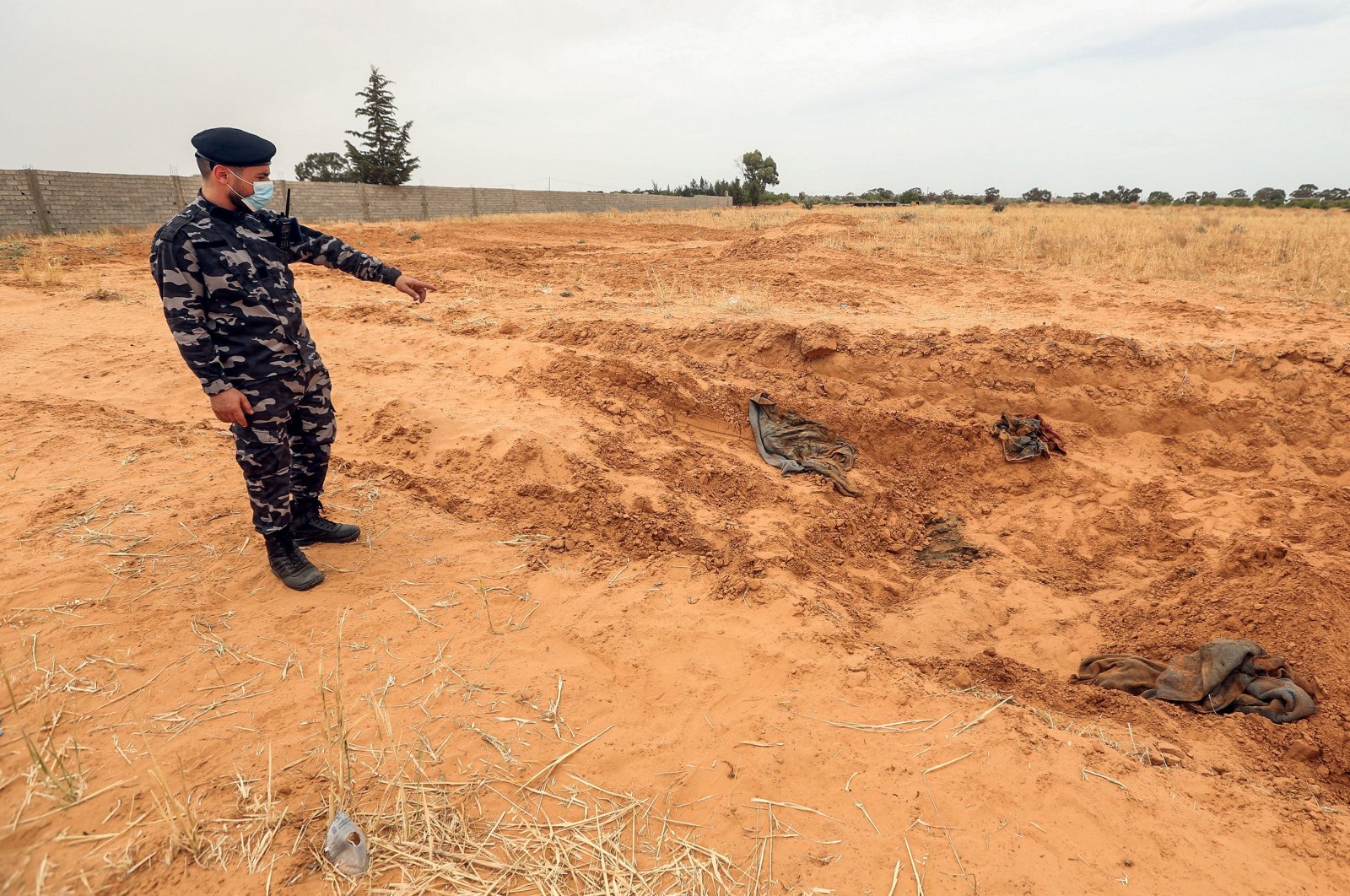 A member of security forces affiliated with the Libyan Government of National Accord (GNA)'s Interior Ministry stands at the reported site of a mass grave in the town of Tarhuna, June 11, 2020. (AFP Photo)
by DAILY SABAH WITH AGENCIES
Jun 12, 2020 11:38 am

The United Nations voiced "horror" after reports of the discovery of eight mass graves in an area recently seized by the unity government after forces loyal to eastern-based putschist Gen. Khalifa Haftar withdrew.

"UNSMIL notes with horror reports on the discovery of at least eight mass graves in past days, the majority of them in Tarhuna," the U.N. mission said in a statement on Twitter.

"International law requires that the authorities conduct prompt, effective & transparent investigations into all alleged cases of unlawful deaths," it added.

Several presumed mass graves have been discovered near Tarhuna, southeast of the capital Tripoli, since it was seized back by forces loyal to the U.N.-recognized Government of National Accord (GNA) on June 5.

An Agence France-Presse (AFP) journalist on Thursday was granted access to a site where several bodies had been discovered and exhumed by the Libyan Red Crescent for identification the day before.

Scraps of clothing were scattered around the site near graves covered with fresh soil.

The director of Tarhuna's public hospital, Aburawi al-Buzeidi, said 160 bodies were discovered in the morgue by GNA forces upon their arrival in the city.

The bodies "were transferred to Tripoli and Misrata by the Red Crescent," he told journalists, giving no further details on the bodies.

UNSMIL also welcomed a decision on Thursday by the justice minister to establish a committee to investigate the grisly find.

"We call on its members to promptly undertake the work aimed at securing the mass graves, identifying the victims, establishing causes of death & returning the bodies to next of kin," it said.

Pro-Haftar forces, backed by Russia, Egypt and the United Arab Emirates (UAE), had been battling since April in fighting that has left hundreds dead and forced 200,000 to flee their homes.

In recent weeks GNA forces, reinforced with Turkish drones and air defenses, have staged a pounding counterattack to regain control of the whole of the country's northwest.

Haftar's forces this month abandoned their remaining positions in the southern suburbs to advancing government troops.

The GNA has vowed to push on for Sirte, Moammar Gadhafi’s hometown and the last major settlement before the traditional boundary between western Libya and Haftar's stronghold in the east.

The GNA's counter-assault is the latest round of fighting in years of violence following the 2011 toppling and killing of longtime dictator Gadhafi in a Western-backed uprising.

The United States, European Union and other foreign powers have called for a cease-fire following Haftar's losses in Tripoli.

Haftar is long known for disrupting previous attempts for peace and political solutions in the country. This time, however, he is also pushing for a truce due to the Libyan Army's advance.

Until recently, Haftar rejected, blocked or violated at least nine diplomatic attempts to end the fighting in the country.

Haftar's first rejection was the political deal that led to the formation of the new government that was founded in 2015 under the guidance of the U.N.

In January 2020, Haftar left the Moscow peace talks, sponsored by Turkey and Russia, without signing a deal. He and his supporters have also consistently violated the Berlin conference arms embargo made in January and did not heed the calls for ending military operations, instead of continuing his assault on the capital Tripoli during the 5+5 Joint Military Commission (JMC) talks following the meetings in Germany.

While government forces’ advance continues, rival sides of the Libyan conflict were engaged in the third round of U.N.-led talks of the JMC aimed at ending the fighting in the country on Wednesday.

The U.S. on Thursday called for a U.N.-led cease-fire in Libya, distancing itself from a proposal by ally Egypt and voiced alarm about the toll on civilians as the tide of war turns.

Egypt has proposed a truce in which "foreign mercenaries" would leave and militias would disband and disarm.

David Schenker, the top U.S. diplomat for the Middle East, voiced appreciation to Egypt, saying it was "productive to have more unity in Libya."

"That said, we think that the U.N.-led process and the Berlin process are really the framework – the most productive framework – to engage in negotiations to make progress on a cease-fire," he told reporters.

Germany in January brought together key stakeholders in a conference in Berlin aimed at ending the bloodshed and stabilizing Libya, a major gateway for migrants to Europe.

Both Turkey and the GNA have voiced skepticism about the Egyptian initiative, seeing it as a way to buy time as Haftar loses ground.

Schenker also called the accounts of mass grounds "truly disturbing" and also warned that a government advance on Sirte "could have serious humanitarian consequences."

He urged both sides to "protect civilians and prevent further damage to infrastructure," including schools, water supplies and oil facilities.

"We continue to call for de-escalation, a cease-fire, a return to political negotiation," he said.

"Now is a time for Libyans on all sides to act so neither Russia nor any other country can interfere in Libya."

Russian mercenaries have assisted Haftar, according to a U.N. report. The strongman is also backed by the UAE and Saudi Arabia, which have close relations with U.S. President Donald Trump.

The U.S. recognizes only the U.N.-backed government, but Trump caused confusion last year by praising Haftar after a telephone conversation with him.