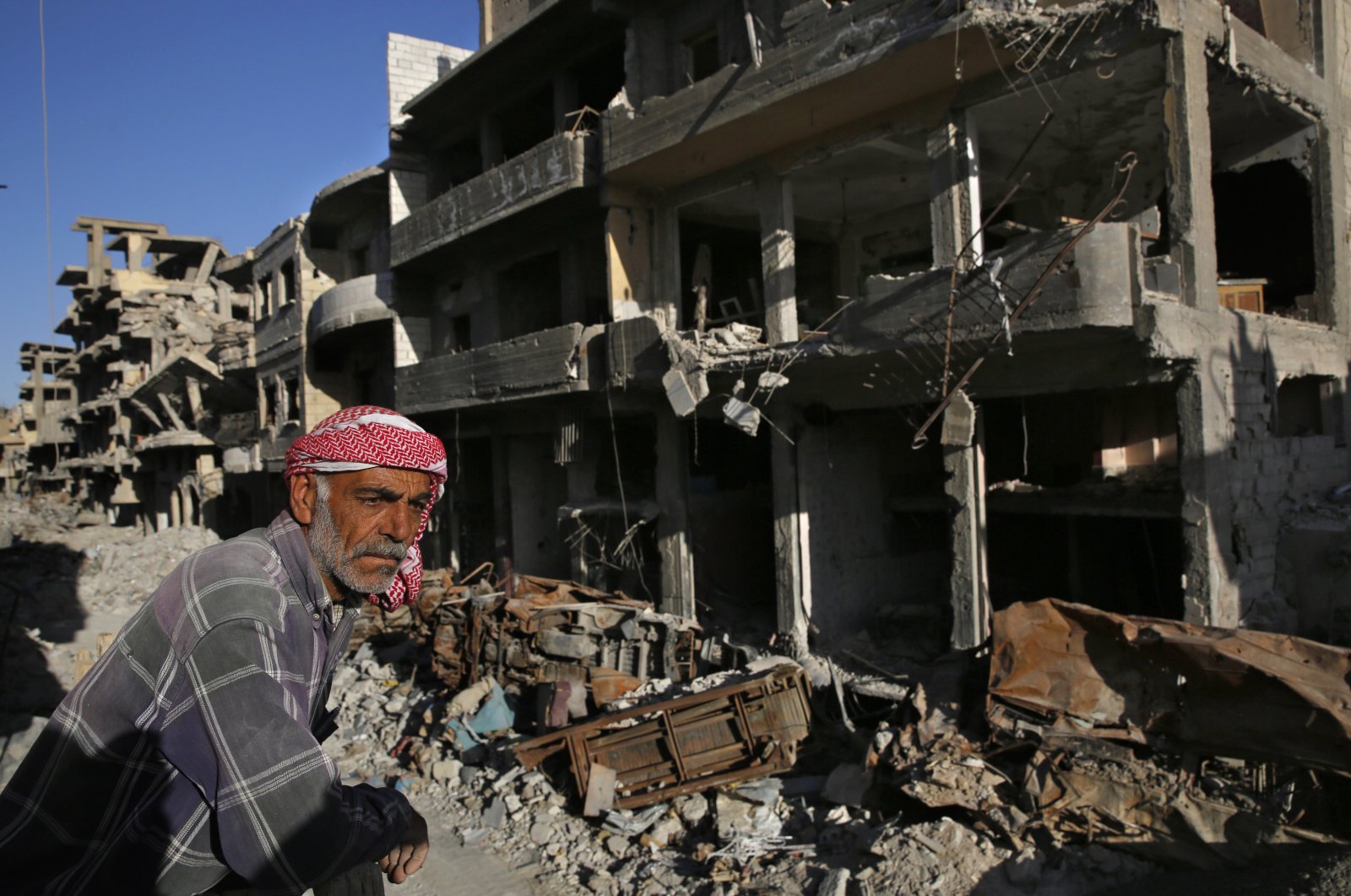 A Syrian man stands between buildings destroyed during the fighting against Daesh militants in Raqqa, April 5, 2018. (AP Photo)
by Daily Sabah with AP Aug 25, 2020 11:57 am
RECOMMENDED

It is estimated that more than 10,000 Daesh terrorists remain active in Iraq and Syria two years after the extremist group’s defeat, and their attacks have significantly increased this year, the U.N. counterterrorism chief said Monday.

He said the Daesh terror group has regrouped and its activity has increased not only in conflict zones like Iraq and Syria but also in some regional affiliates.

“However, in non-conflict zones, the threat appears to have decreased in the short term,” he said.

“Measures to minimize the spread of COVID-19, such as lockdowns and restrictions on movement, seem to have reduced the risk of terrorist attacks in many countries.”

Nonetheless, Voronkov said, “there is a continued trend of attacks by individuals inspired online and acting alone or in small groups, which could be fueled by ISIL’s opportunistic propaganda efforts during the COVID-19 crisis,” using an alternative acronym for the terror group.

He said the COVID-19 crisis has highlighted the challenges of eliminating the threat of terrorism, pointing to actions by Daesh and other terrorist groups seeking “to exploit the far-reaching disruption and negative socioeconomic and political impacts of the pandemic.”

But Voronkov said the pandemic’s impact on Daesh recruitment and fundraising activities remains unclear, and there is no clear indication of a change in the terrorist group’s strategic direction under its leader, Abu Ibrahim al-Hashimi al-Quraishi.

Voronkov also said the COVID-19 crisis has further complicated “the already dire and unsustainable situation” of thousands of people with suspected links to Daesh who are stranded in camps in Syria and Iraq, especially women and children.

“Repatriation, prosecution, rehabilitation, and reintegration and the protection of the vulnerable have become ever more urgent,” he added.

While some countries have repatriated their nationals, especially children, many have not.

“The global threat from ISIL is likely to increase if the international community fails to meet this challenge,” the head of the U.N. Office of Counter-Terrorism warned, using an alternate acronym for Daesh.

U.S. Ambassador Kelly Craft said the United States shares the secretary-general’s concern and has brought back American citizens and prosecuted them where appropriate.

Despite Daesh's defeat on the battlefield, “we must work together to ensure that the population of detained foreign terrorist fighters as well as their family members displaced in Syria and Iraq do not become the nucleus of an ISIS 2.0,” she said, using another alternative acronym for the terrorist group.

Russia’s U.N. Ambassador Vassily Nebenzia, whose country is the Syrian regime’s main ally, said the global terrorist threat from Daesh remains high, and its leadership is planning terrorist attacks in the border area between Syria and Iraq.

“At the same time, the terrorists do not intend to give up plans to revive the 'caliphate' in Iraq,” he said. “ISIL continues to build up its combat potential and is seeking to expand the area and scope of terrorist attacks in the country.”

Nebenzia said Daesh’s organization and tactics suggest “that it has now fully transformed into a network structure with a high degree of autonomy of branches and 'sleeping cells' in various countries and regions of the world.”

Turkey recognized Daesh as a terrorist organization in 2013. Since then, the country has been attacked by Daesh terrorists numerous times, including 10 suicide bombings, seven bombings and four armed attacks that killed 315 people and injured hundreds. In response, Turkey has launched military and police operations inside the country and abroad. Turkey also captured top Daesh terrorists in counterterror operations at home and in Syria.