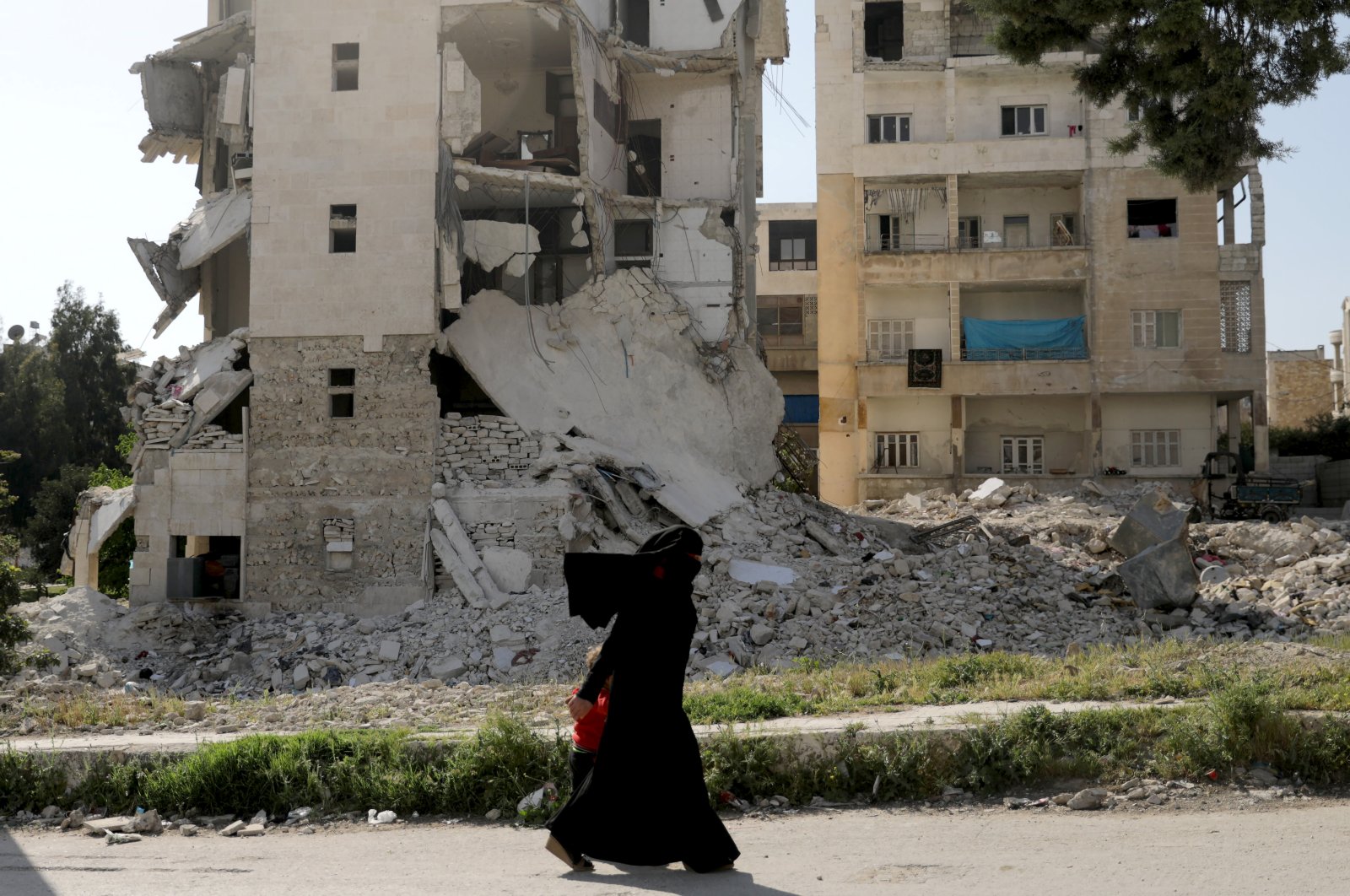 A woman walks past damaged buildings with her child in the rebel-held Idlib city, Syria April 19, 2020. (Reuters File Photo)
by Agencies Jul 09, 2020 10:05 am
Edited By Root Administrator
RECOMMENDED

The U.N. Security Council on Wednesday overwhelmingly rejected a Russian resolution that would have cut back the delivery of humanitarian aid to Syria’s mainly opposition-held northwest to just one crossing point from Turkey.

Authorization for the aid, which comes through two crossing points on the Turkish border – at Bab al-Salam, which leads to the Aleppo region, and Bab al-Hawa, which serves the Idlib region – expires Friday.

Under its resolution, Moscow had wanted to abolish the first crossing point and put a time limit of six months on the second.

Russia needed nine votes and no veto from a permanent member of the Council to get its resolution passed – but received only four votes, announced the President of the Security Council, German Ambassador Christoph Heusgen.

Seven countries voted against it and four abstained. "The draft resolution has not been adopted, having failed to obtain the required number of votes," Heusgen said.

Diplomats said that Russia, along with China, Vietnam and South Africa, had voted for the resolution.

Against were the U.S., the U.K., France, Germany, Belgium, Estonia and the Dominican Republic.

The vote came after Russia and China on Tuesday vetoed a draft resolution by Germany and Belgium providing for a one-year extension of the cross-border authorization and the maintenance of both crossing points.

In an interview with AFP on Wednesday, Washington's ambassador to the U.N., Kelly Craft, said the U.S. opposed any reduction.

"We know the right thing to do is to have both border crossings in the northwest remain open to reach the maximum amount of Syrians that are in need of humanitarian aid," Craft told AFP.

When asked if the issue was a "red line," she replied, "Yes, absolutely."

Russia's move "is just another attempt for them to politicize humanitarian assistance," she said.

According to Craft, keeping only one border crossing open would cut off 1.3 million people living north of Aleppo from humanitarian aid.

The choice to be made between the Western position and that of Russia and China is "between good and evil, right and wrong," said Craft, noting that Germany and Belgium "already have a new draft in mind and we are very supportive."

The two European countries submitted their new draft Wednesday evening. In their latest draft text, obtained by AFP, Germany and Belgium asked for just a six-month extension of cross-border aid authorization, instead of one year.

But they have kept both border crossings open, and there is no indication that Moscow – in a position of strength on the subject, as it was six months ago – will be satisfied with the changes.

The result of a forthcoming vote on the new draft, which Russia could again block, is not expected until Friday, when the U.N. cross-border authorization expires.

Craft in 2019 visited one of the crossing points from the Turkish side near Bab al-Hawa, an experience that made a lasting impression and made working with displaced Syrians "a personal issue," she said.

Authorization for cross-border humanitarian aid has existed since 2014, with periodic extensions.

Tuesday's vote was the 15th time that Russia has used its veto since the start of the Syrian war in 2011, and the ninth for China.

They argue that the U.N. authorization violates Syria's sovereignty, and that aid can increasingly be channeled through Syrian authorities.

According to the U.N., 70% of Idlib province's three million residents need humanitarian assistance.

Syria has been mired in a vicious civil war since early 2011, when the Assad regime cracked down on pro-democracy protests.

Since then, hundreds of thousands of people have been killed and more than 10 million displaced, according to U.N. figures.