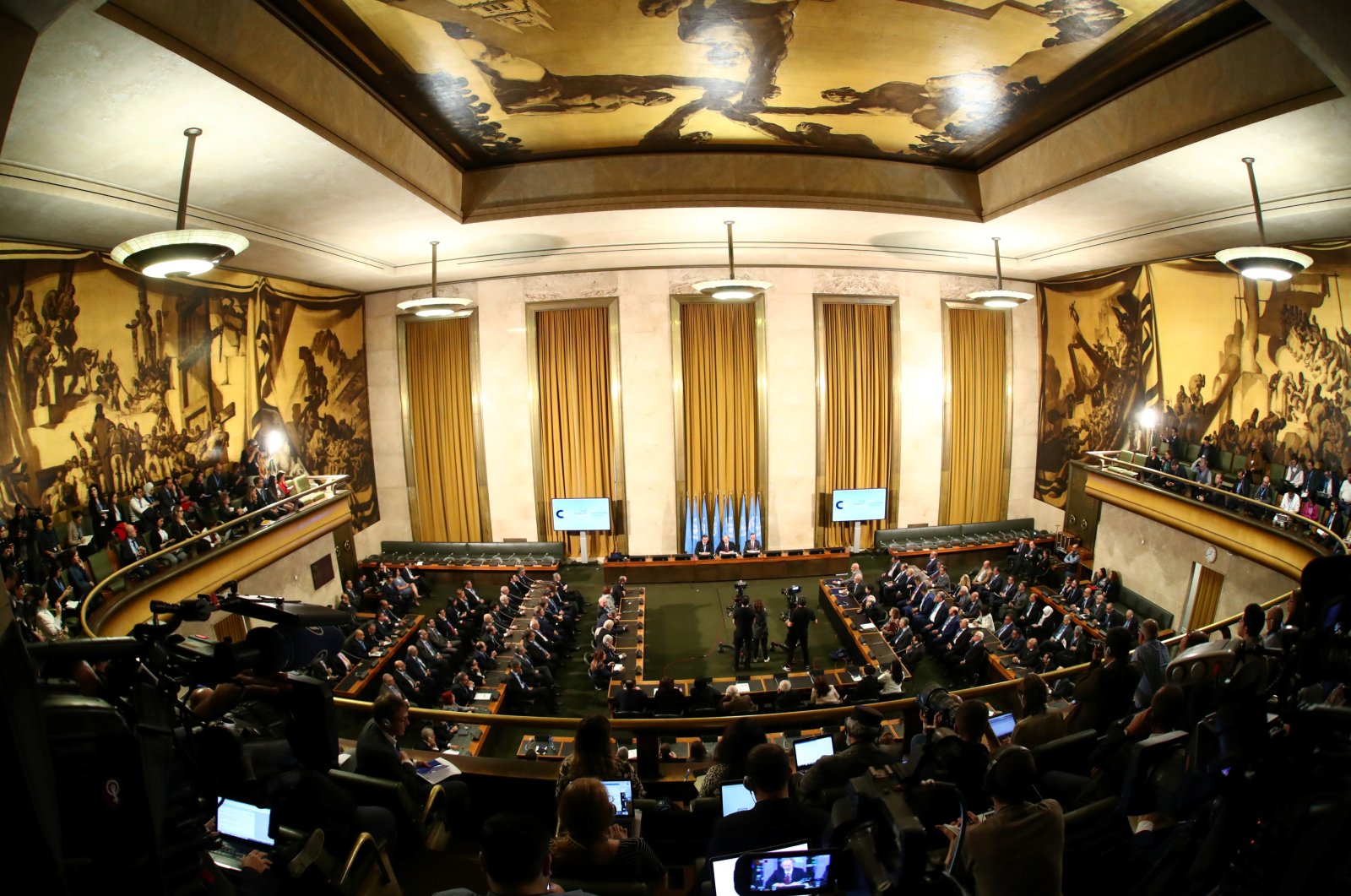 An overview of the first meeting of the new Syrian Constitutional Committee at the United Nations in Geneva, Switzerland, Oct. 30, 2019. (Reuters File Photo)
by DAILY SABAH WITH AGENCIES Aug 20, 2020 10:36 am
Edited By Nurbanu Tanrıkulu Kızıl

The U.S. and Russia welcomed U.N. Syria envoy Pederson's invitation to attend the third round of talks on Syria in Geneva next week as the U.S. expressed full support for the envoy's efforts

The United States and Russia welcomed an invitation from the United Nation's special envoy to Syria on Wednesday to participate in the third round of the Syrian Constitutional Committee talks in Geneva later this month.

At an online meeting of the U.N. Security Council (UNSC), Geir Pedersen urged parties to attend the meeting "in good faith and without preconditions."

"I continue to encourage all committee members to come to Geneva ready to engage in earnest on the substance, on the basis of the agenda that the co-chairs have agreed, without of course any preconditions," he said.

He praised Turkish-Russian coordination in northwestern Syria, warning of the human and social effects of the coronavirus on civilians.

Pedersen is the fourth U.N. envoy to try to mediate peace in Syria where the opposition fighting for Bashar Assad is holding onto a last piece of territory in the northwest.

Fighting has calmed since March when Turkey, which backs some groups opposed to Assad, agreed to a cease-fire with Russia.

She stressed that the Donald Trump administration fully supports Pedersen in his efforts to facilitate the committee's desire to draft a new constitution.

Also, Russia's envoy to the U.N., Vasily Nebenzya, underlined the importance of maintaining political dialogue and said Russia continues to have a special representative in the committee and provide the necessary support to Syrians.

Despite the coronavirus pandemic, a new round of Syrian peace talks is set to begin Aug. 24.

The last round of talks failed to start on Nov. 29 because an agreement on the agenda could not be reached, Pedersen told journalists at the time.

The committee will meet next week after a nine-month hiatus caused by differences over the agenda until March, followed by coronavirus-related restrictions, Pedersen told the Security Council Wednesday.

He said he continued to "encourage all committee members to come to Geneva ready to engage in earnest on the substance."

"Frustration with the lack of progress on the political process has been continuously impressed upon me," he said.

The so-called Syrian Constitution Committee was launched in Geneva last year with 150 delegates representing the government, opposition and civil society in equal parts.

It marked the first political negotiations between the Syrian regime and the opposition groups.

The committee's "small body," consisting of 15 delegates from each list, is to take part in the meeting on Aug. 24, Pedersen said. It will be their third session.

The goal of the negotiations has been to build momentum toward a political solution for the bloody civil war that has lasted some nine years.

More than 5 million civilians have become refugees. Turkey hosts 3.6 million, more than any country in the world.

The constitutional review committee is made up of 150 delegates divided equally among the regime, the opposition and civil society and its "small body," which consists of 45 members, will take part in next week's meeting.

Pressure from international stakeholders, starting with Russia, Turkey and Iran, makes it more likely that the committee will function effectively. What all parties agree on, for now, is the need to preserve Syria's territorial integrity and political unity. It is also noteworthy that this middle ground is an important starting point for Syria's new constitution.

Constitutional review is a central part of the U.N.'s peace plan for Syria, which was defined by Security Council resolution 2254, adopted in December 2015.