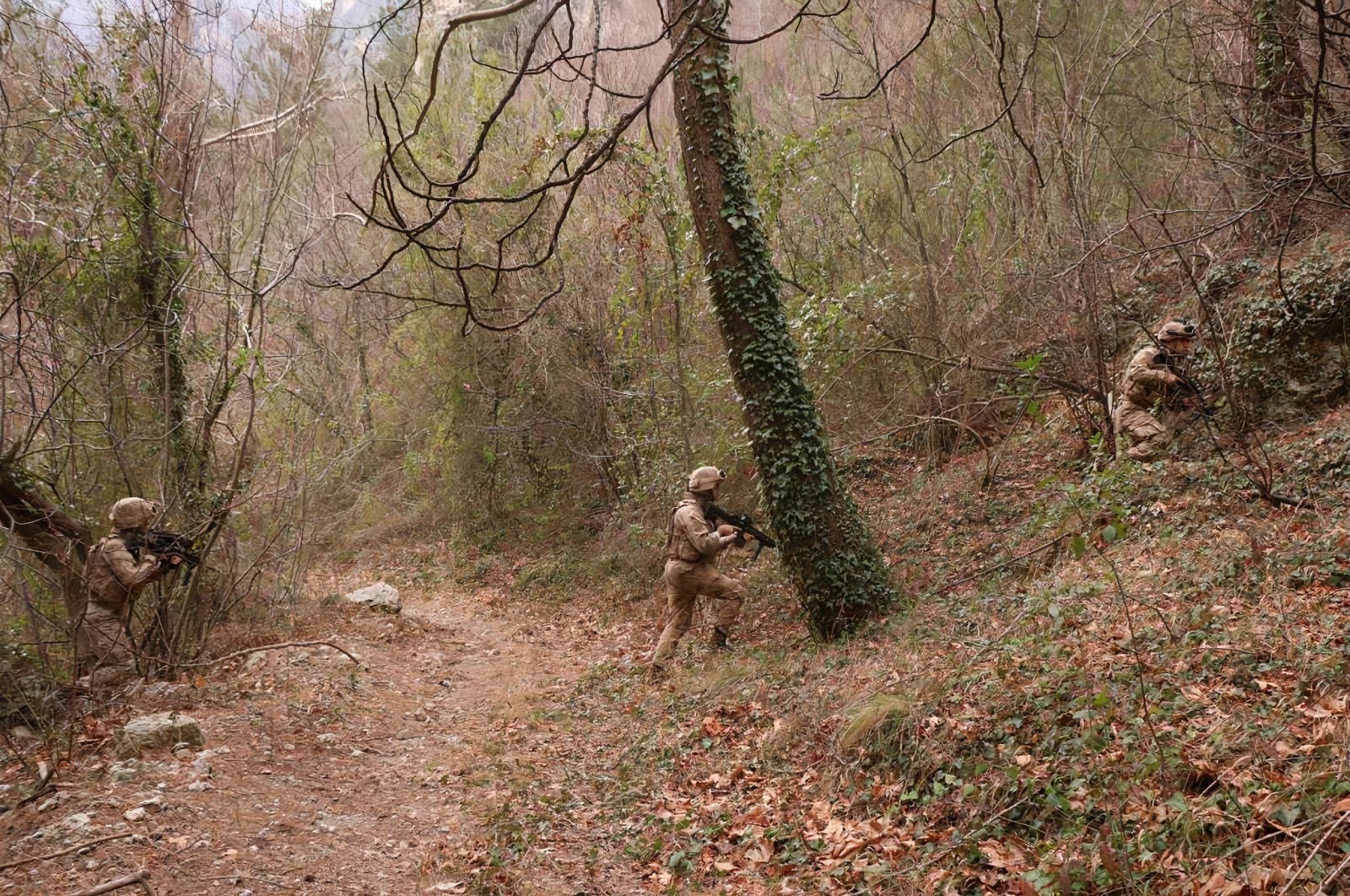 Soldiers participate in Operation Eren-8 Amanoslar in the southern provinces of Osmaniye and Hatay, and southeastern Gaziantep, Turkey, Feb. 8, 2021. (AA Photo)
by daily sabah May 08, 2021 10:17 pm

Fighting terrorism on all fronts in internal and cross-border operations, President Recep Tayyip Erdoğan vowed once again that Turkey will continue its struggle until the last terrorist is eliminated

Turkish President Recep Tayyip Erdoğan on Saturday voiced renewed determination to continue the fight against terrorism until the last terrorist is eliminated and he vowed support to families that have been protesting the PKK.

During an iftar dinner with the Diyarbakır mothers ahead of Mother’s Day, Erdoğan stated that Turkey will continue to support those who reject the PKK terrorist organization and surrender to government authorities to rebuild their future.

“We follow with admiration your struggle to be reunited with your children that were deceived by the PKK and its political affiliations,” the president said.

Altun wrote on Twitter that the "Mothers set an example to the entire world with their strong stance against the PKK terrorist group.”

"Together hand in hand, we will wipe out the terrorist group from our land," he added.

Staging protests in front of the pro-PKK Peoples' Democratic Party's (HDP) provincial headquarters in southeastern Diyarbakır province, the mothers are protesting the terrorist group and its Syrian offshoot, the YPG, for abducting their children.

The protest has been going on for over 610 days outside the offices of the HDP.

Saying that while some families enjoyed the happiness of rejoining their children while others still continue their fight, Erdoğan stated: “This struggle that the families conduct decisively has contributed to revealing the real face of the terrorist organization.”

“The terrorist organization, whose capability to carry out actions has diminished thanks to the operations of security forces both within the country and across borders, is desperate in the face of the endurance of the Diyarbakır mothers.”

Speaking on Turkey’s ongoing counterterrorism operation in northern Iraq, Erdoğan vowed to "topple" the Qandil Mountains, a hideout of the PKK.

In late April, the TSK launched a large-scale military operation against terrorists in northern Iraq. The PKK targets are being struck in the Metina, Avashin-Basyan, Zap and Qandil regions. The operation comes as a follow-up to the Claw-Tiger and Claw-Eagle operations launched last June in the area.

Though the central Iraqi government and the Kurdistan Regional Government (KRG) are cooperating to remove the PKK presence from the country’s northern regions, initiatives have been insufficient so far.

Within this scope, the Turkish Armed Forces (TSK) and the National Intelligence Organization (MIT) in a coordinated effort have killed eight PKK terrorists in northern Iraq’s Gara, according to the Defense Ministry’s statement on Sunday.

Two shelters and a site used by the terrorist group were also destroyed in the operation, the ministry added.

Since 2016, Turkey has launched a trio of successful anti-terror operations across its border in northern Syria to prevent the formation of a terror corridor and to enable the peaceful settlement of residents. These operations include Euphrates Shield in 2016, Olive Branch in 2018, and Peace Spring in 2019.

Soylu on Saturday gave a briefing of Turkey’s fight against terrorism during a security meeting in Kars and underlined that security forces will continue their struggle to establish peace and safety within the country and abroad.

Soylu stated that the Eren operations against terrorism continue in 15 regions in the country. Eren-1 was launched on Jan. 11 with the participation of 1,071 security personnel.

“So far, three terrorists in the red category, six in the orange, one in the grey and two regional high-ranking members were eliminated with the Eren operations,” Soylu stated, referring to the Interior Ministry’s most wanted list that is divided into colors.

“If we add the terrorists killed last night in Hakkari, then 40 terrorists have been eliminated within the scope of the Eren operations.”

Soylu continued to say that security forces have also entered and destroyed 8,000 hideouts and caves used by the PKK within Turkey since July of 2020. Referring specifically to the Eren operations, 770 caves and hideouts have been destroyed since the start of operations in January, he added.

“Again, the previous day, our security forces, police, gendarmerie and intelligence have eliminated three terrorist members in Tunceli,” the minister said, specifying that one of those was a regional head and in the orange category.

In its more than 35-year terror campaign against Turkey, the PKK – listed as a terrorist organization by Turkey, the United States, and the European Union – has been responsible for the deaths of at least 40,000 people, including women, children and infants.