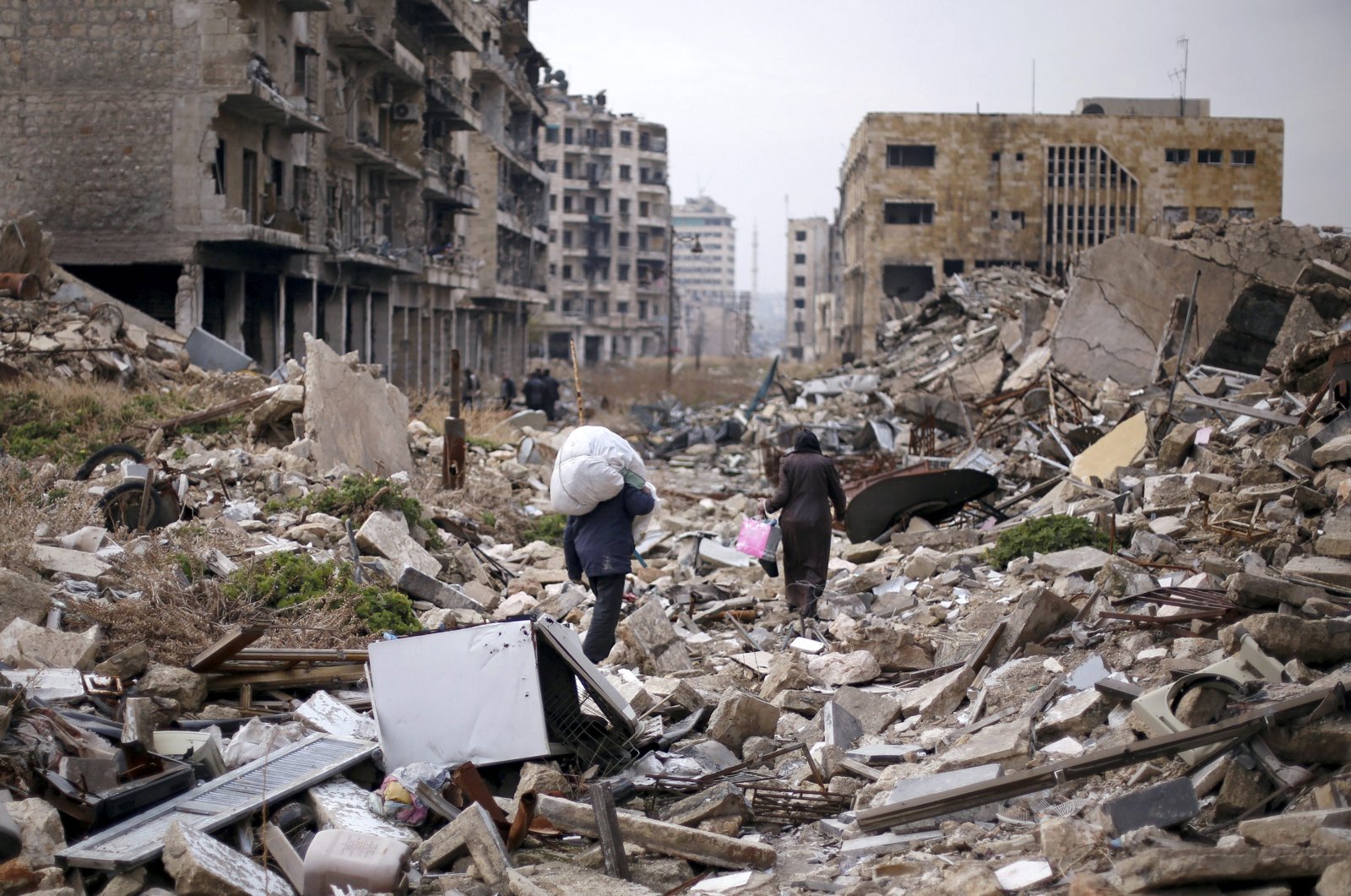 People walk amid the rubble as they carry belongings that they collected from their houses in the Assad regime controlled area of Aleppo, Syria, December 17, 2016. (REUTERS Photo)
by REUTERS Apr 07, 2020 10:36 am
RECOMMENDED

The Syrian regime is dragging its feet on releasing prisoners under an amnesty declared by Bashar Assad, raising fears of mass infections if the new coronavirus spreads through its overcrowded jails, rights groups said Monday.

The Damascus regime has confirmed only 19 cases of infection from the global pandemic, with two deaths. But with a health system ravaged by almost a decade of civil war, it is widely feared Syria will not be able to contain the coronavirus.

The U.N. envoy for Syria, Geir Pedersen, last week pointed to the risk of COVID-19, the highly contagious respiratory disease caused by the coronavirus, racing through the country's prisons and urged quick action to free prisoners.

An amnesty declared by Assad on March 22 expanded the range of crimes covered by an amnesty announced last September.

But human rights groups said only a few hundred people jailed for common crimes had been released so far in what they called a token gesture to deflect calls on Damascus to follow the lead of other states, including its close ally Iran, that have freed tens of thousands as the virus has swept the world.

"The Syrian regime seeks to circumvent the pressures it is facing from organizations and states that fear the spread of COVID-19 in the ranks of detainees," Fadel Abdul Ghany, chairman of the Syrian Network for Human Rights (SNHR), told Reuters.

He said none of those freed were civic activists or others among the tens of thousands of political prisoners detained since the outbreak of Syria's conflict, which began with peaceful protests against Assad's rule.

Syria's state media have not reported how many prisoners have been released of late. State judges have said the aim is to ease prisoner numbers. SNHR said those released had been convicted of crimes including smuggling and forgery.

SNHR said it documented 665 arbitrary arrests, 116 deaths under torture and 232 releases since the September amnesty.

U.N. investigators and Western human rights activists say the Syrian authorities have arrested and tortured tens of thousands of people since the conflict began in 2011.

A U.N. Independent International Commission of Inquiry said in a 2018 report the whereabouts of these detainees remain unknown and unacknowledged by the state. It said these civilians "have been disappeared" and many may no longer be alive.

Syria's prisons include facilities run by security agencies that authorities deny exist, where denial of medical care is part of a widespread policy of torture, according to Sara Kayyali, Syria specialist with Human Rights Watch (HRW).

She expressed particular fear for detainees in such jails. "I won't impose any intent on the Syrian government, but imagine you have an infected prison population of people they already want to get rid of for expressing opposition to the government?"

Iran has temporarily freed about 85,000 people from jail, including political prisoners, in response to the coronavirus pandemic, a judiciary spokesman said last month.

In North Africa, Tunisia has freed 1,420 prisoners and Morocco 5,654, citing efforts to stop the virus, while Algeria pardoned 5,037 but without explicitly linking its move to the pandemic.

Since appearing in Wuhan, China, last December, the novel coronavirus has spread to at least 184 countries and regions, according to figures compiled by the U.S.-based Johns Hopkins University.