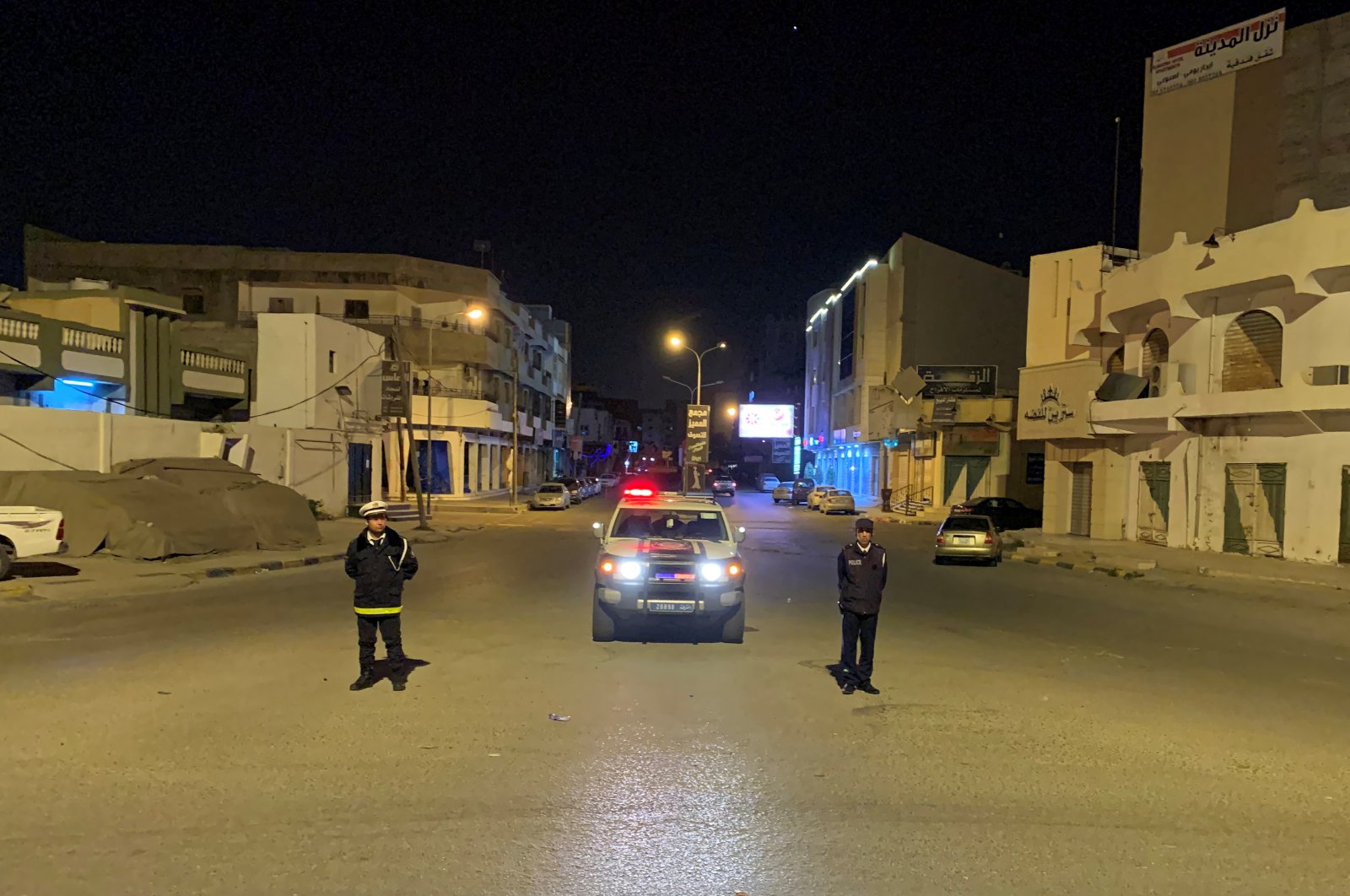 Police officers stand in the middle of the road during a curfew, imposed as part of precautionary measures against coronavirus disease (COVID-19), in Misrata, Libya. March 22, 2020. (REUTERS Photo)
by Compiled from Wire Services Mar 26, 2020 10:59 am
RECOMMENDED

Battles erupted around Tripoli on Wednesday following the intensified bombardment of the Libyan capital, defying international pleas for a truce to tackle the coronavirus after the first case was confirmed in the country.

The internationally recognized legitimate Government of National Accord (GNA) launched an operation on several fronts early in the day, including an attack on an airbase held by their rivals west of Tripoli, according to both sides.

"Attacks and counterattacks in Libya continue to inflict further suffering and civilian casualties," the U.N. mission said in a tweet, calling for an immediate halt to the violence.

Residents of Tripoli, the seat of the GNA, said the shelling was the worst in weeks, shaking windows in the city center miles from the front line in the southern suburbs.

"We are done in this country. There is a war and we hear clashes all day, fearing a missile will fall near us. Now there is coronavirus. If it spreads in Libya, I think we can only pray," said Issa, 30, a shop owner in Tripoli.

The renewed fighting comes despite increased international pressure on both sides to halt the violence over concerns about the spread of the new coronavirus. Libya reported its first case of the virus Tuesday.

A week ago, the warring sides have expressed commitment to a humanitarian pause in fighting so that authorities could focus on preventing the spread of the coronavirus. There are fears the global pandemic could devastate the war-torn Libya, where the decade-long conflict has ravaged key infrastructure and created dire medical shortages.

Haftar forces launched his offensive on Tripoli last April. The chaos in the oil-rich country has worsened in recent months as foreign backers increasingly intervene, despite pledges to the contrary at a high-profile peace summit in Berlin earlier this year.

Haftar forces have been trying to capture the capital for almost a year, backed by the United Arab Emirates, Egypt and Russia. The GNA is supported by Turkey and Qatar.

A shelling attack by Haftar forces last week drew U.N. condemnation after it killed four girls and young women. On Tuesday, shells hit a prison in an area held by the GNA, also drawing U.N. anger.

"In response to the heaviest bombardments Tripoli has seen, we launched a series of counterattacks against Haftar," Mohamed Geblawi, spokesman for the Libyan Ministry of Foreign Affairs, said in a statement.

Geblawi cited what he called "indiscriminate shelling" by the Haftar forces after both sides had agreed to a cease-fire to tackle the coronavirus.

Haftar forces’ spokesman Ahmed Mismari said it was the pro-GNA forces that had broken the truce. Haftar forces had repulsed the attack and later captured the areas of Zaltan, al-Jameel, al-Assa and Raqdalin near the GNA-held town of Zuwara, he said.

A fighter in the pro-GNA forces said the battle would continue. "It was a successful operation during the progress and the attack, and these operations will continue," he said by phone.

The escalation in the fighting could spell disaster for Libya's already fragmented and badly stretched health system in handling the coronavirus, after authorities confirmed the first case of the disease late on Tuesday.

"Libyans have suffered for years under this brutal conflict, and now they face yet another threat to their health and wellbeing," said Elizabeth Hoff, the World Health Organisation representative in Libya.

So far the only confirmed coronavirus case in Libya is that of a 73-year-old man who crossed into Libya from neighboring Tunisia on March 5, according to the National Center for Disease Control in Tripoli.

The U.N. Office for the Coordination of Humanitarian Affairs in Libya on Wednesday voiced deep concern, warning that a possible outbreak would overwhelm the already stretched aid response in Libya.

“The health and safety of all people in Libya, including 345,000 of the most vulnerable, is at risk,” OCHA said.

U.N. Secretary-General Antonio Guterres had called for a complete cease-fire in conflicts around the world as governments and local authorities struggle with a pandemic that has spread to most countries.

"We sit at home hearing the clashes, which are a daily routine since 2011. But now we are scared of coronavirus. I am scared for my family. Libya doesn't have a good health care system," said Akram, a 28-year-old barista in Tripoli with three children.

Since the ousting of late ruler Moammar Gadhafi in 2011, two seats of power have emerged in by Libya: Haftar in eastern Libya, which does not have any legitimate recognition, and the GNA in Tripoli, which enjoys U.N. recognition.