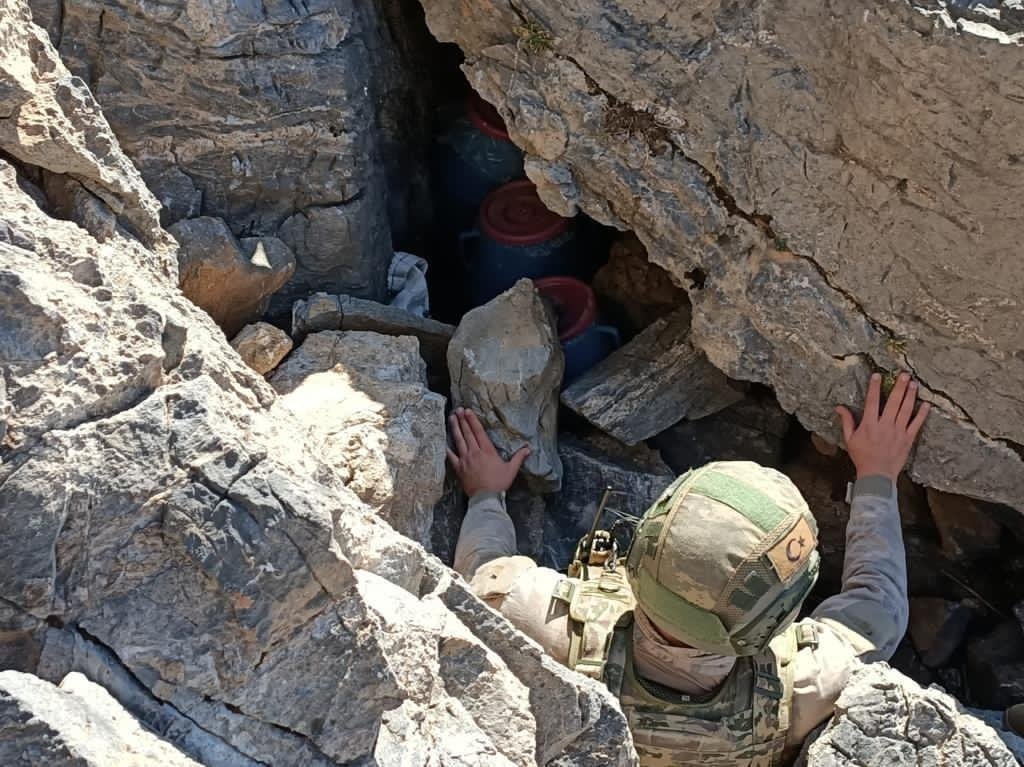 A Turkish soldier examines a shelter belonging to PKK terrorists in the southeastern province of Bitlis, Nov.16, 2020. (AA)
by DAILY SABAH WITH AGENCIES
Nov 16, 2020 12:31 pm

Turkish• security forces continue to target YPG/PKK terrorists through counterterrorism operations that are being conducted both domestically and in cross-border operations.
At least six YPG/PKK terrorists were killed by Turkish security forces in northern Syria, Turkey’s National Defense Ministry said on Monday..
“Our heroic commandos carried out yet another successful operation in the (Operation) Peace Spring region. Six PKK/YPG terrorists who attempted to attack to disrupt peace and security were neutralized,” the ministry said on Twitter.
Video footage of the operation was also shared on Twitter.
Turkey on Oct. 9 launched Operation Peace Spring to eliminate YPG terrorists from the area east of the Euphrates River in northern Syria. The operation aims to secure Turkey’s borders, aid in the safe return of Syrian refugees and ensure Syria’s territorial integrity. The operation has cleared terrorists from more than 4,300 square kilometers (1,660 square miles) in northern Syria, according to Foreign Ministry figures.
Separately, two Syrian nationals terrorists were arrested by local gendarmerie forces in the southeastern province of Mardin while attempting to illegally cross into Turkey, according to a national security source.
The suspects, identified only by initials, H.A.S. and R.A., were caught with explosive devices in two power banks, said the source, who asked not to be named due to restrictions on speaking to the media.
The Syrian origin terrorists’ affiliation was not mentioned, however, the area across the border from Mardin is under the control of YPG/PKK.
In another operation, two YPG/PKK terrorists, one of whom was revealed to be the YPG’s head of security in northern Syrian town of Manbij, were captured in the southern province of Mersin on Monday.
Turkish security forces regularly conduct counterterrorism operations in the eastern and southeastern provinces of Turkey where the PKK has attempted to establish a strong presence and bases. The Turkish Armed Forces (TSK) also carries out cross-border operations in northern Iraq, a region where PKK terrorists have hideouts and bases from which to carry out attacks in Turkey.
In its more than 40-year terror campaign against Turkey, the PKK – listed as a terrorist organization by Turkey, the U.S. and the European Union – has been responsible for the deaths of some 40,000 people, including women and children.