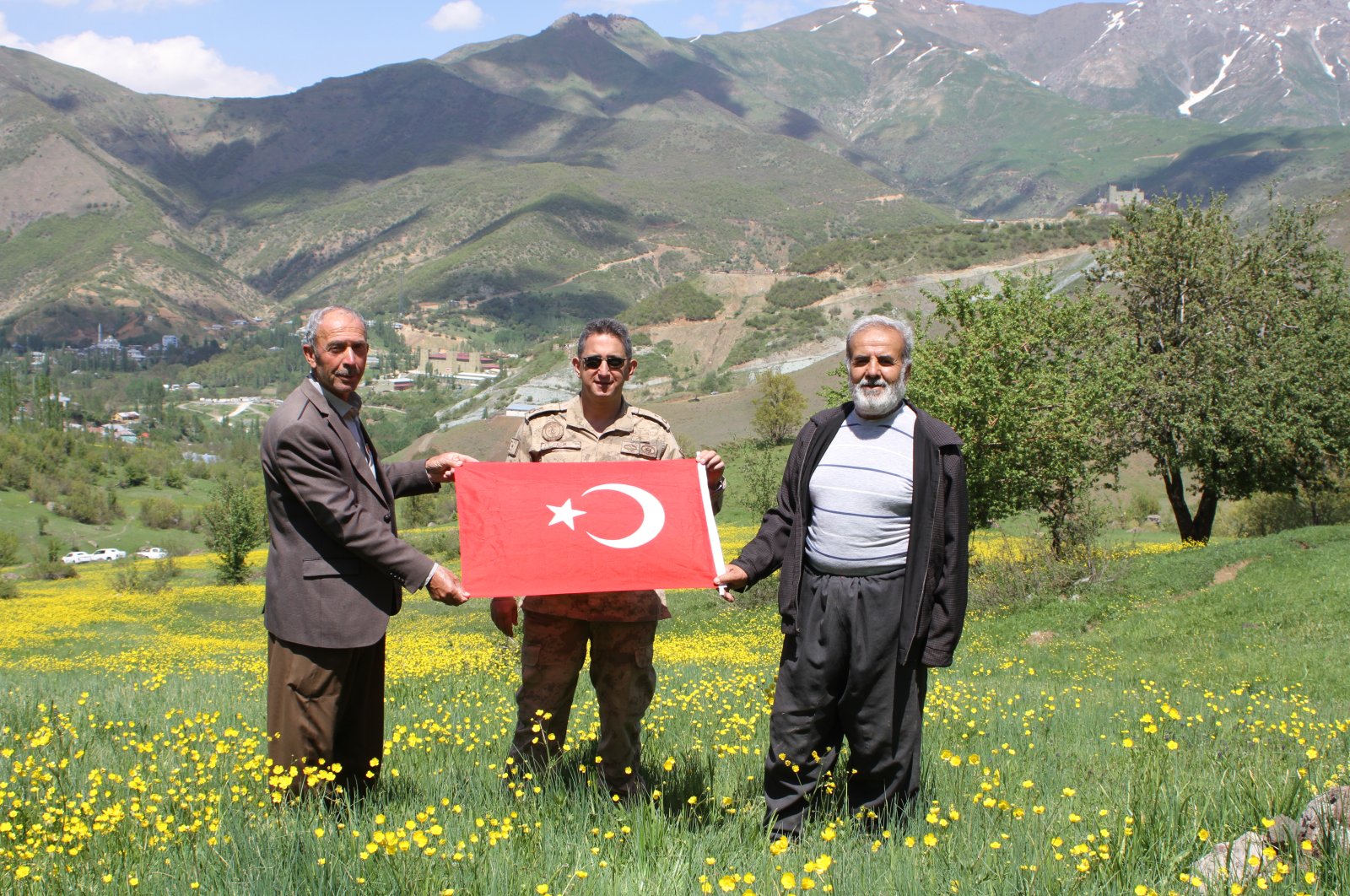 While counterterrorism operations continue against the PKK in the eastern and southeastern regions of Turkey, areas cleared from the terrorist group celebrate liberation as people enjoy nature and focus on agriculture.

On Sunday, mayor of southeastern Hakkari's Şemdinli district Yakup Güven, alongside locals, walked in a plateau cleared of the terrorist elements. Liberated from the PKK recently, the plateau is located in Tekkeli village near the Iranian border. Güven and the locals reached the plateau by walking 3 kilometers (1.86 miles) from the city center. After reaching the plateau, the group enjoyed the fresh air and took pictures holding Turkish flags.

Speaking on the short trip, the mayor said that they are enjoying the spring in the terror-free region.

Similarly, southeastern Diyarbakır province's Hazro district celebrated the liberation from the PKK by embracing nature. The farmers of the district began agricultural production on Sunday, with the harvest of organic strawberries being the focus of the process.

Operations Kıran and Kapan have successfully brought the number of PKK terrorists down to 492 from around 3,000 in 2016, Türkiye daily reported on May 8, adding that the group has been able to recruit only 13 militants in 2020.

In order to boost the motivation of the soldiers engaging in these operations, Interior Minister Süleyman Soylu visited the troops in southeastern Şırnak province's Namaz mountain region on Saturday. The minister, accompanied by some high-ranking military officials, shared an iftar with the soldiers. During the iftar meal, President Recep Tayyip Erdoğan also joined the conversation with the soldiers via a phone call, celebrating their Eid al-Fitr.

"You are at the forefront of the fight against terrorism. May God help you," Erdoğan told the soldiers, expressing gratitude for their strong stance against the terrorists.

The counterterrorism operations continued on Sunday as at least three PKK terrorists were killed in southeastern Turkey, according to the Interior Ministry.

The ministry said in a statement that the Provincial Gendarmerie Command in Siirt carried out the air-backed operation in Eruh district's rural area of Gabar.

Operations are underway in the region, it added.

In its more than 40-year terror campaign against Turkey, the PKK, listed as a terrorist organization by Turkey, the U.S. and European Union, has been responsible for the deaths of 40,000 people, including women, children and infants. The YPG is the PKK's Syrian offshoot.

The TSK also carries out cross-border operations in northern Iraq, a region where PKK terrorists have hideouts and bases where they carry out attacks on Turkey. The operations intensified in July 2018 and gradually became routine.

At least two YPG/PKK terrorists have been killed in Turkish airstrikes in northern Iraq, according to the Ministry of National Defense on Sunday.

The terrorists were killed in the Avaşin-Basyan region after being detected by reconnaissance and surveillance vehicles, the ministry said on Twitter.

Turkish security forces also destroyed 20 mines planted by the YPG/PKK terror group in the region, according to the ministry on Saturday.

"In search and sweep activities carried out in Iraq's northern Haftanin region, 20 VS-50 anti-personnel mines of PKK terror group were seized and destroyed by our METI (mine/IED detection&disposal) teams," the ministry said on Twitter.