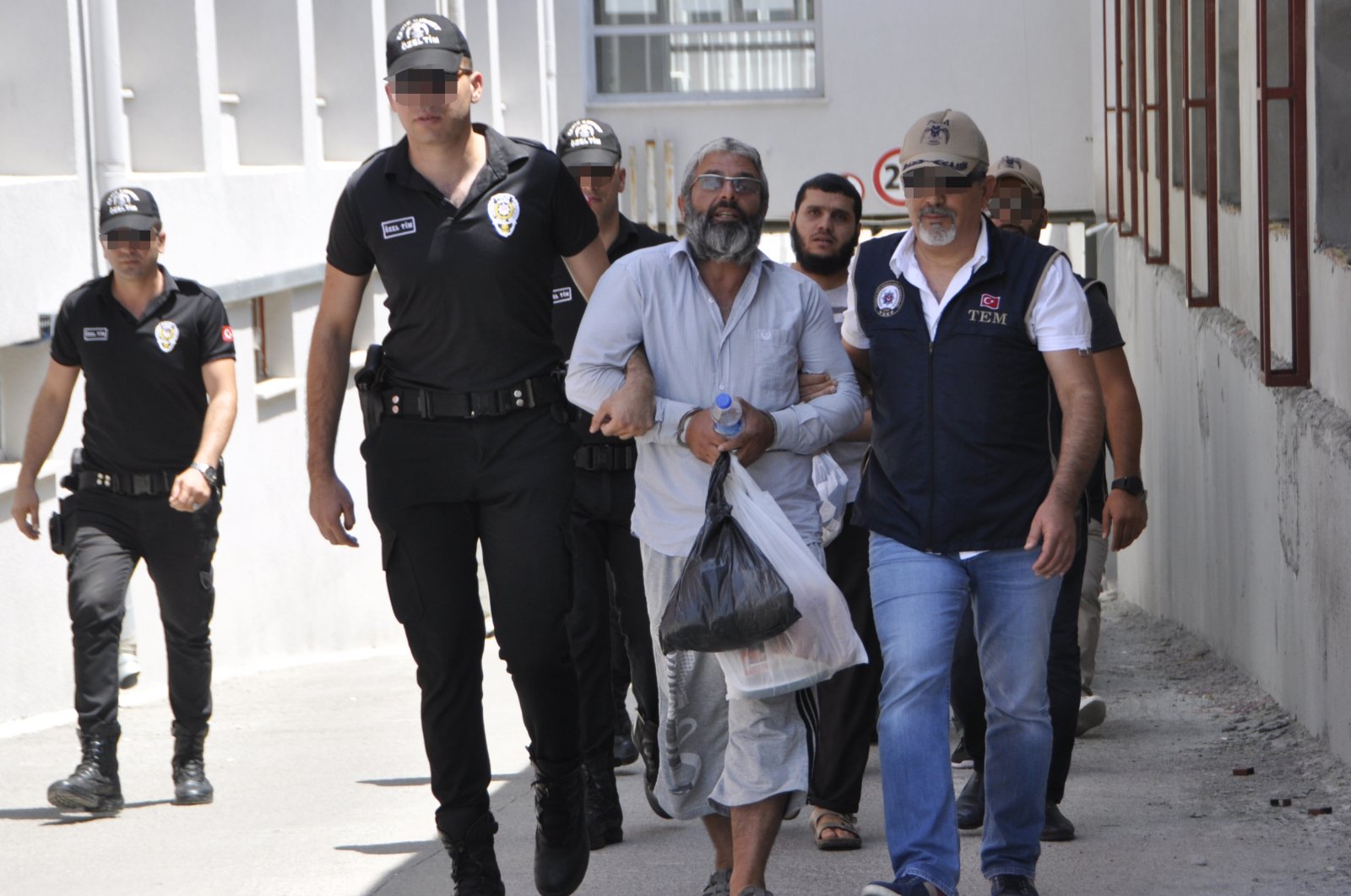 Mahmut Özden, the leader of the Daesh terrorist group in Turkey, is escorted by police in this undated photo. (AA Photo)
by daily sabah Sep 02, 2020 11:30 am
Edited By Nurbanu Tanrıkulu Kızıl
RECOMMENDED

The senior Daesh terrorist detained by Turkish police was planning to carry out an attack on Hagia Sophia Grand Mosque and target politicians, nongovernmental organization (NGO) heads and other prominent figures in Turkey, according to the official investigation.

“He has been in detention since Aug. 20. His interrogation has finished, and he made some confessions during the interrogation, but most importantly we were able to confiscate digital materials,” Soylu told columnist Abdülkadir Selvi of the Turkish daily Hürriyet.

Soylu noted that the digital materials included instructions from Daesh terrorists in Iraq and Syria, as well as the terrorist group’s new structure in Turkey, including its targets and goals to form teams of 10-12 to carry out attacks.

The interior minister continued by saying that there are other Daesh terrorists who were detained in the operations and are still giving their statements.

The process that led to the terrorist leader’s arrest started with the detention of terrorist Hüseyin Sağır, who was plotting an attack near Istanbul’s famous Taksim Square.

The investigation has revealed that Sağır had been receiving instructions from Özden to carry out the attack. Özden had also formed several groups of terrorists to carry out activities in rural areas, including recruiting new members, purchasing supplies and providing accommodation for terrorists.

Police nabbed Sağır at a hotel in Istanbul and found five ammunition clips, 150 cartridges and a long-barreled weapon in his hotel room.

Sağır came to Istanbul from southeastern Gaziantep province near the Syrian border and was planning to carry out an attack near the famous Taksim Square.

The terrorist leader was specifically in search of new places to hide weapons and explosives in the woods when he was detained, the police said.

He was planning to hold prominent figures hostage for ransom in exchange for Daesh terrorists detained in Syria.

Istanbul police were able to bring down an active terrorist cell that directly took orders from Özden, after his arrest.

Özden was transferred to Silivri Prison in Istanbul after being convicted by the court, police said.

He was also detained in July 2019 for extorting local shopkeepers in Adana province, along with other terrorists who confessed that they had been receiving financial assistance from some Gulf states, including the United Arab Emirates (UAE) and Saudi Arabia, claiming to collect "zakat," obligatory alms in Islam.

Meanwhile, police detained another Daesh terrorist in an extensive counterterrorism operation in the Talaş district in central Kayseri province. No further information was provided by the gendarmerie units, which carried out the operation.

Although the terrorist group has been largely defeated in Iraq and Syria, its presence still poses a threat, as individuals following its ideology encourage others to carry out violence. European analysts have also warned against attacks by Daesh, as isolated individuals not under the watch of intelligence services have become more common.