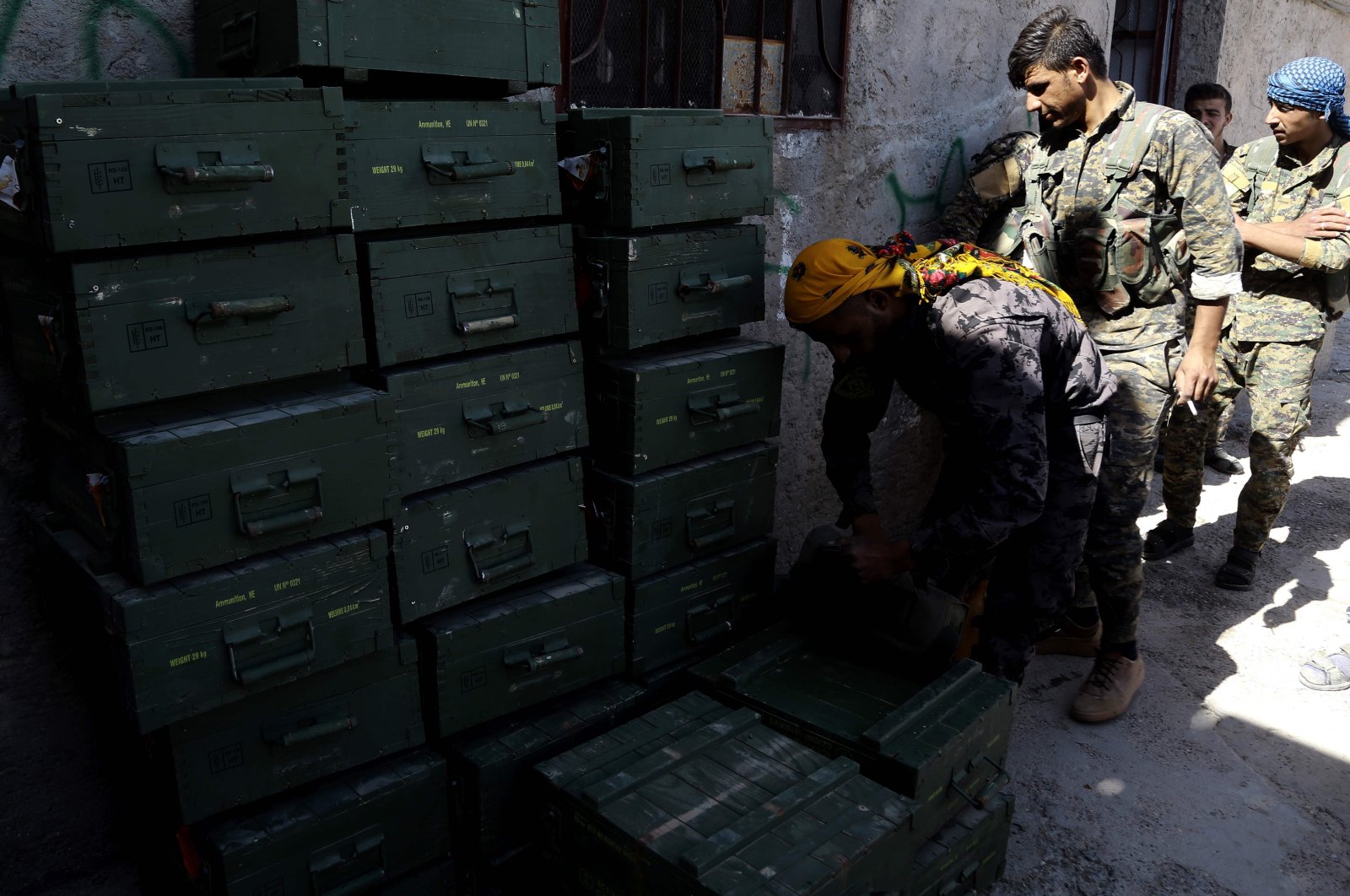 YPG terrorists unload boxes of ammunition supplied by the U.S.-led coalition in the fight against the Daesh terror group. (AFP Photo)
by Associated Press Mar 31, 2020 10:45 am
RECOMMENDED

Imprisoned Daesh militants rioted again on Monday at a jail controlled by YPG terrorists in northeastern Syria, hours after the YPG forces said they had restored order, activists said.

Gunfire could be heard in the area as ambulances rushed the wounded from inside the prison to hospitals and clinics in the nearby city of Hasakah, activists on the ground said. U.S.-led forces flew overhead dropping light bombs illuminate the area for the YPG forces while drones hovered over the facility, they added.

The prison riots first broke out Sunday night when former Daesh members held there began knocking down doors and digging holes in walls between cells. It was one of the most serious uprisings by the prisoners since the Daesh terror group's defeat a year ago.

The London-based International Observatory of Human Rights, which has an extensive network of contacts inside Syria, said at least four people had escaped from the prison.

It was reported late Sunday that the rioters were in full control of the ground floor of the prison and have smashed and removed the prison's internal doors.

Earlier on Monday, Kino Gabriel, a so-called spokesman for the YPG forces, said the situation in the prison in Hasakah was "fully under control." He said their anti-terrorism force "ended the riots and secured the facility and all prisoners inside."

It was not immediately clear if the riots were triggered by concerns over the spread of the new coronavirus.

Mustafa Bali, another so-called spokesman for the forces, said late Sunday that so far there is no connection between the riot and fears of the fast-spreading virus.

Gabriel did not say earlier whether there were casualties in the operation to re-secure the prison adding that none of the prisoners were able to escape.

Forces led by YPG terrorists run more than two dozen detention facilities, scattered around northeastern Syria, holding about 10,000 Daesh fighters. Among the detainees are some 2,000 foreigners, including about 800 Europeans.

The YPG forces, backed by the U.S-led coalition, declared a military victory against Daesh in March last year, after seizing control of the last sliver of land the militants had controlled in southeast Syria. The Daesh terror group has resorted to guerrilla attacks since losing its last significant piece of territory in Syria last year.

The prison is believed to house foreign Daesh militants. It is not clear what nationalities were held there. Some 5,000 Daesh suspects are held in the jail run by the YPG terrorists, according to the Observatory.

A video posted by activists said to be taken during Sunday's riots, showed two inmates carrying a banner with writing in Arabic that reads: “We call upon the coalition and international organizations that human rights be respected.”

Some Arabs, who form a majority of the inhabitants of the areas under the control of YPG militia, accuse the terrorist group of discrimination, an allegation rejected by the group’s officials.

Families of Daesh militants and supporters who came out of the last territory controlled by the group are also holed in camps around the YPG-controlled areas – the largest one housing nearly 70,000 women and children, many of them foreigners.

The PKK, which is listed as a terrorist organization by Turkey, the U.S. and the European Union, has waged a terror campaign against Turkey for more than 35 years and has been responsible for the deaths of nearly 40,000 people, including women and children. The YPG is the Syrian offshoot of the PKK terror group.