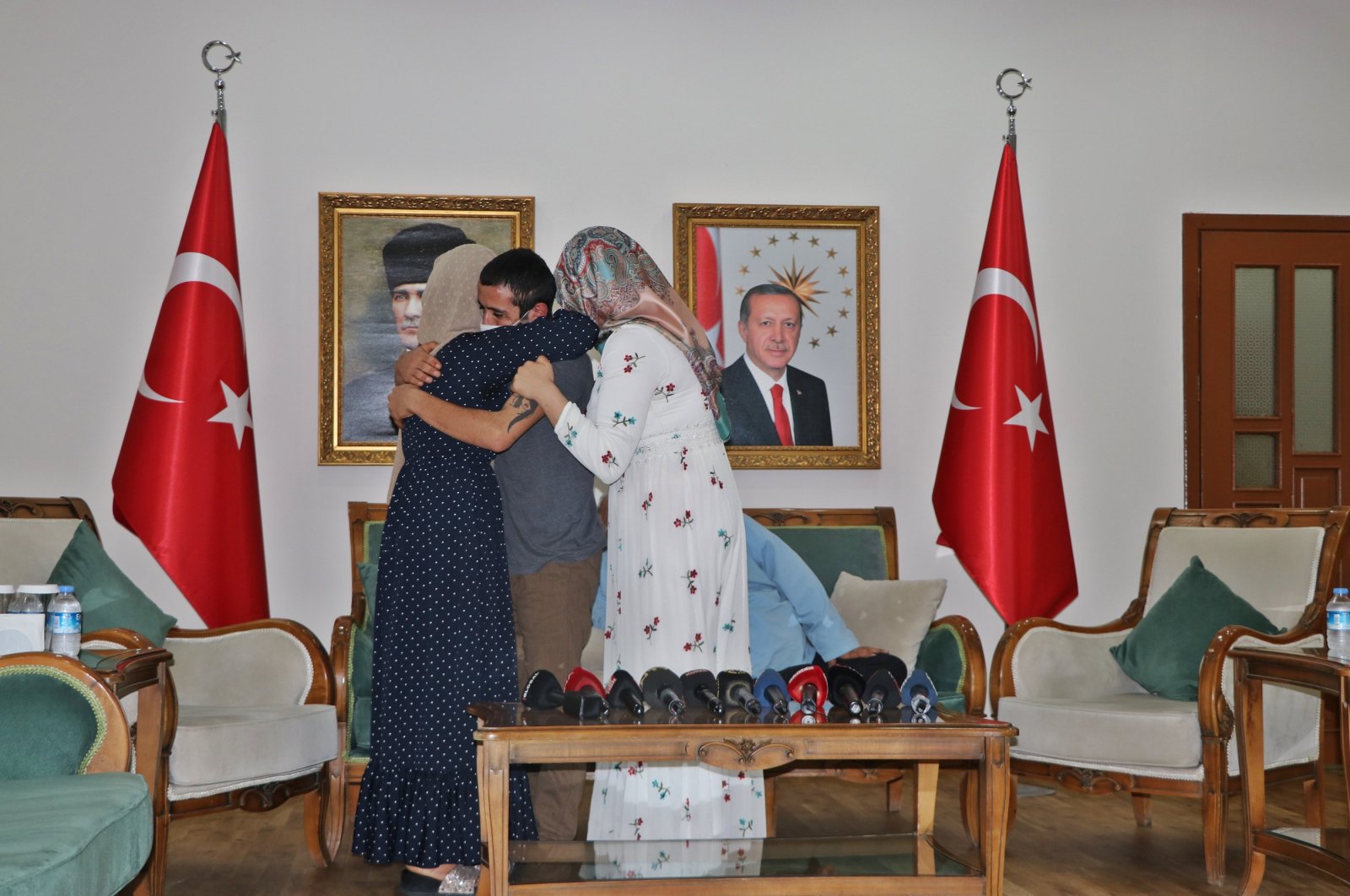 Ertaş family, who have been protesting for the return of their son from PKK, are seen celebrating after their son surrendered to security forces in Diyarbakır, southeastern Turkey, July 10, 2020. (DHA Photo)
by DAILY SABAH WITH AA Jul 10, 2020 12:38 pm

After months of waiting, families protesting their children’s abduction by the PKK are more optimistic than ever as the number of returnees increases thanks to efforts by Turkish security forces and officials

Fourteen young people have rejoined their families after fleeing from the PKK terrorist organization, offering hope to the 127 families that have been protesting the abduction of their family members at the People's Democratic Party (HDP) headquarters in southeastern Diyarbakır province.

On the 311th day of the sit-in, the families are still determined not to leave the HDP’s door until their sons and daughters have returned, sitting with photos of missing loved ones in their hands.

Following Akar, Hatice Ceylan was the second mother rejoining her son Cafer in December 2019, after five years apart, while in the same month Hüsniye Kaya also received the message that her child had fled the PKK’s camps in northern Iraq.

Most of the families have stated that the last time the children were seen it was at the HDP provincial building while many others claim they had been forcefully abducted.

Aynur Panay, a mother demanding the return of her son, made a statement in Kurdish urging mothers to join the protest. Panay blamed the HDP for the abduction of her child and said she was determined to continue her protest until her son was returned.

The HDP is accused by the government of having links to the PKK. The protesting mothers claim the party is responsible for kidnapping or tricking their children to join the terror group. The HDP, long facing public reaction and judicial probes over its ties to the PKK, is under pressure from this growing civilian protest movement. Various groups from around Turkey have supported the Kurdish mothers in their cause, with many paying visits to show solidarity.

Most recently, physically handicapped father Cemal Ertaş rejoined his son who was convinced to surrender by gendarmerie forces this week.

"We continue fighting for our children. They (PKK) killed one of my children, and my little one was abducted from school and taken to the mountains," said Necibe Çiftçi, one of the mothers.

Accusing the HDP of handing her child to the terror group, she called on all suffering mothers to unite against the PKK.

A significant number of suspected terrorists have started fleeing the PKK and surrendering while many terrorists lack the courage to leave the group because they would face severe punishment if caught. More than 235 members surrendered to Turkish security forces in 2019. Once they surrender, former recruits are provided with many opportunities, including the right to an education and the freedom to live without fear and oppression.

“We do not wait in vain. We are at the right address. I will not leave this place unless I rejoin my daughter,” mother Nazlı Sancar said, “I did not give birth to my daughter for her to be taken by the HDP and PKK.”

Sancar indicated that her daughter had been abducted at the age of 13 nine years ago and that she had hoped her daughter would return after 14 young people fled the terrorist organization. She said that with every child returning, she felt as if her own child had come back and was happy for the families.

Even the global coronavirus pandemic did not discourage the families from pursuing their quest to regain children abducted by the terrorist organization. While those having chronic illnesses had to pause their sit-in, the rest continued with masks and social distancing.

HDP mayors have also been accused of undermining municipal services, allowing the PKK to dig trenches in the streets and launch attacks on police and soldiers when the terrorist group adopted an urban warfare strategy in July 2015, thus ending a two-year reconciliation period. HDP municipalities and their staff were also found to be actively participating in terrorist attacks launched after July 2015.

The terrorists, who fled from PKK terrorist camps in northern Iraq, turned themselves in at the Habur Customs Gate in Şırnak province’s Silopi district and were taken to the local police department. The terrorist PKK often uses northern Iraq, just across the Turkish border, to stage attacks in Turkey.

In a written statement, the Interior Ministry said the terrorists surrendered as a result of the persuasion efforts of the Turkish National Police's counterterrorism and intelligence departments.

With the latest addition, the number of terrorists who surrendered through persuasion since the beginning of this year has risen to 100, it said, indicating that efforts are ongoing to ensure the surrender of the terror group members.

The Interior Ministry in recent times has frequently been voicing that the dissolution of the PKK has accelerated due to Turkey's successful counterterrorism operations and strategies both at home and abroad.