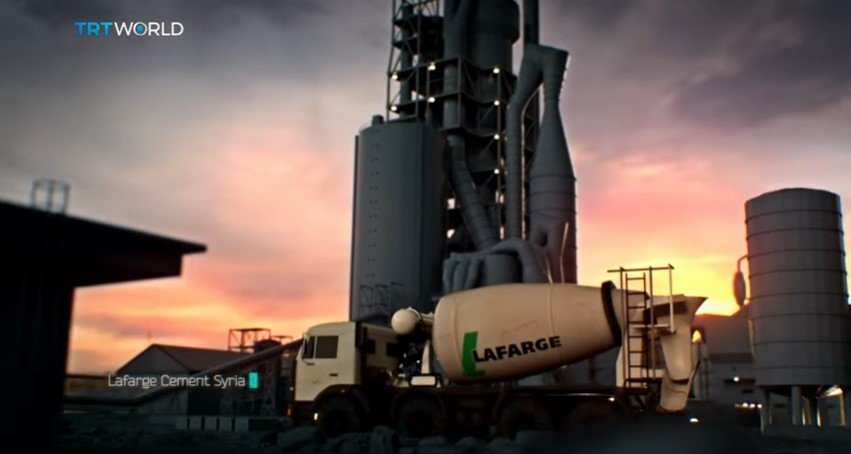 A screengrab from "The Factory: A Covert French Operation" documentary aired by Turkish public broadcaster TRT.
by Daily Sabah with AA Nov 13, 2021 11:02 am
RECOMMENDED

A documentary exposing France's links with the Daesh terrorist group through cement giant Lafarge made its debut Friday on several channels of the Turkish public broadcaster TRT.

The documentary, "The Factory: A Covert French Operation," will "reveal the sinister network behind funding international terror," on the sixth anniversary of the 2015 Paris terrorist attacks, at TRT News, TRT World and TRT Arabi, a news release by TRT World said Thursday.

"The Factory was produced over a two year period with half a million documents being meticulously inspected – revealing dirty relationships behind funding int'l terrorism," TRT's Director-General Zahid Sobacı wrote on Twitter earlier.

"We did not expect the outcome would be this big when we started this project two years ago,” said Serdar Karagöz, the director-general of Anadolu Agency. He was the editor-in-chief of TRT World before joining the Turkish news agency.

He added that "the dirty operations of the French company Lafarge in Syria are presented with evidence in this documentary."

Congratulating TRT World’s team of investigative journalists, Karagöz said it is "a documentary that would stagger Europe.”

It details why Lafarge "decided to stay in Syria and keep its factory operative throughout the war, how EU funds were diverted to Daesh and the PKK, with the knowledge and cover-up of the French intelligence agencies, the steps taken by French politicians and intelligence agencies to save Lafarge from legal proceedings, and how the process of funding Daesh in Syria ended up financing 2015 Paris attacks," it said.

It was produced by the Exclusive News and Content Department at TRT World, with executive producer and director Abdülkadir Karakelle, producer Ömer Faruk Tunç and director of cinematography Güray Ervin.

The documents exposed how Lafarge, charged with complicity in crimes against humanity regarding funding Daesh operations in Syria, had a relationship with the terrorism outfit that French intelligence fully knew about. Huge ransoms were paid to the terrorist group, in addition to raw material purchases.

French agencies, according to data obtained, used Lafarge's network to get intelligence in the region and maintain operations.

In addition, millions of dollars were also paid to the PKK – listed as a terrorist group by Turkey, the U.S. and the EU – in donations or taxes as ransom or in exchange for freedom to operate. Ankara had also accused the company of providing cement to the PKK and its Syrian affiliate YPG, which was used in fortifications and tunnels.