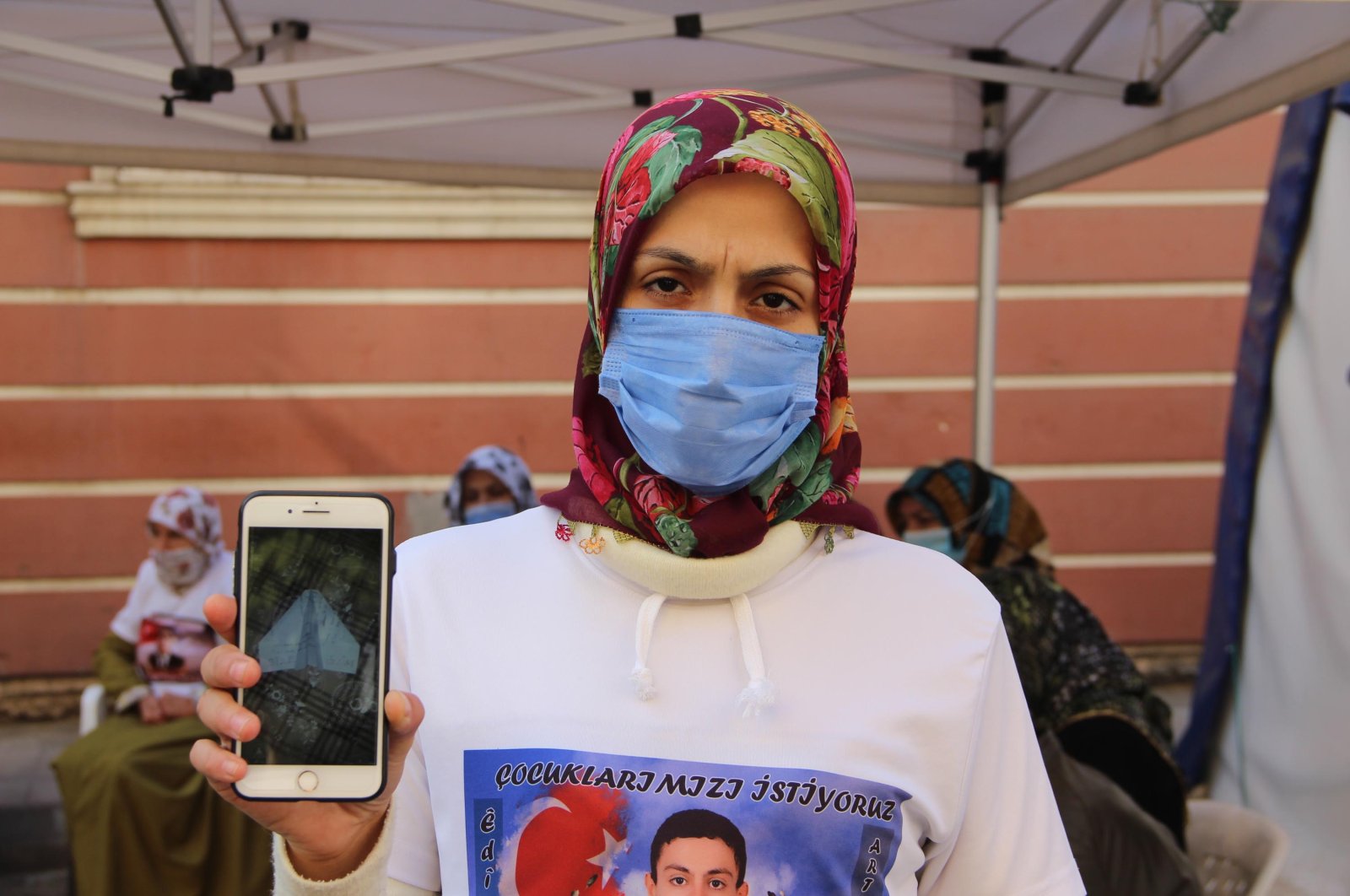 Ayşegül Biçer shows the picture of the death threat sent to her home by the PKK terrorists on her phone while wearing a t-shirt with a picture of her abducted child, Mustafa, Diyarbakır, Turkey, Nov. 17, 2020. (DHA)
by DAILY SABAH WITH AGENCIES
Nov 17, 2020 12:03 pm

A Kurdish family that has been protesting against the PKK for over a year now, accusing the group of kidnapping their child, received death threats from the terrorist group Sunday.

The Biçer family has been participating in the sit-in protests in front of the Peoples' Democratic Party (HDP) headquarters in southeastern Diyarbakır province, demanding their abducted child Mustafa back from the PKK terrorist group.

However, the demands of the family have not only been left unanswered by the terrorist group but the family has also faced other threats in the form of insults and harassments.

The latest act of aggression took place Sunday when a folded piece of paper with "death to you all" written on it was thrown near the window of the family's house.

The family said Tuesday they have filed a complaint about the issue and the security forces are taking necessary measures to protect them from any further terrorist aggression.

The mother, Ayşegül Biçer, said that the threats from the terrorist group have reached a new level in an attempt to damage their determination to get their son back.

“We are not afraid. If we were afraid, we would leave the protest on its first day,” sorrowful mother Ayşegül Biçer said.

When they received the death threat, the Biçer family was marking the second anniversary of their son’s kidnapping, which took place on Ayşegül’s birthday.

Ayşegül said, “My only wish is to be reunited with my son, seeing his face one more time and hugging him.”

Several families have been holding a demonstration in front of the HDP’s main headquarters in Diyarbakır for over a year, as they state the party has been supporting PKK terrorists in recruiting and kidnapping youth.

The protest started when Hacire Akar turned up at the doorstep of the HDP’s Diyarbakır office one night after her son was abducted by the PKK. Akar’s son Mehmet returned home on Aug. 24, giving hope to the other families.

Taking Akar’s struggle as an example, three more mothers – Biçer, Fevziye Çetinkaya and Remziye Akkoyun – started a fresh sit-in in front of the HDP building on Sept. 3, 2019, with the protest growing day by day since then. The number of families coming from all over the country to protest the pain of being separated from their children has reached more than 150.

The sit-in protests by the Kurdish parents and families are seen as a reaction against the outlawed PKK, a terrorist group that has abducted and recruited their children, as well as the HDP, a political party that many of these families view as being in league with the PKK.

The families continued their protest during the scorching-hot summer and cold winter. From the beginning, the mothers took turns protesting with their husbands of the HDP headquarters. While the mothers were protesting, their husbands nurtured their children at home. Some mothers continued the demonstrations with their children under difficult conditions, sometimes sleeping on the sidewalk or fainting from exhaustion.

The families have not given up their protests even amid the coronavirus pandemic which has affected the whole world.

Members of the HDP, who did not want to deal with the pain of the mothers, temporarily shut down the Diyarbakır headquarters and decided to carry out the party’s activities at its district branch for some time.

Offenders in Turkey linked to terrorist groups who lay down their weapons and surrender to security forces are eligible for possible sentence reductions under a repentance law.