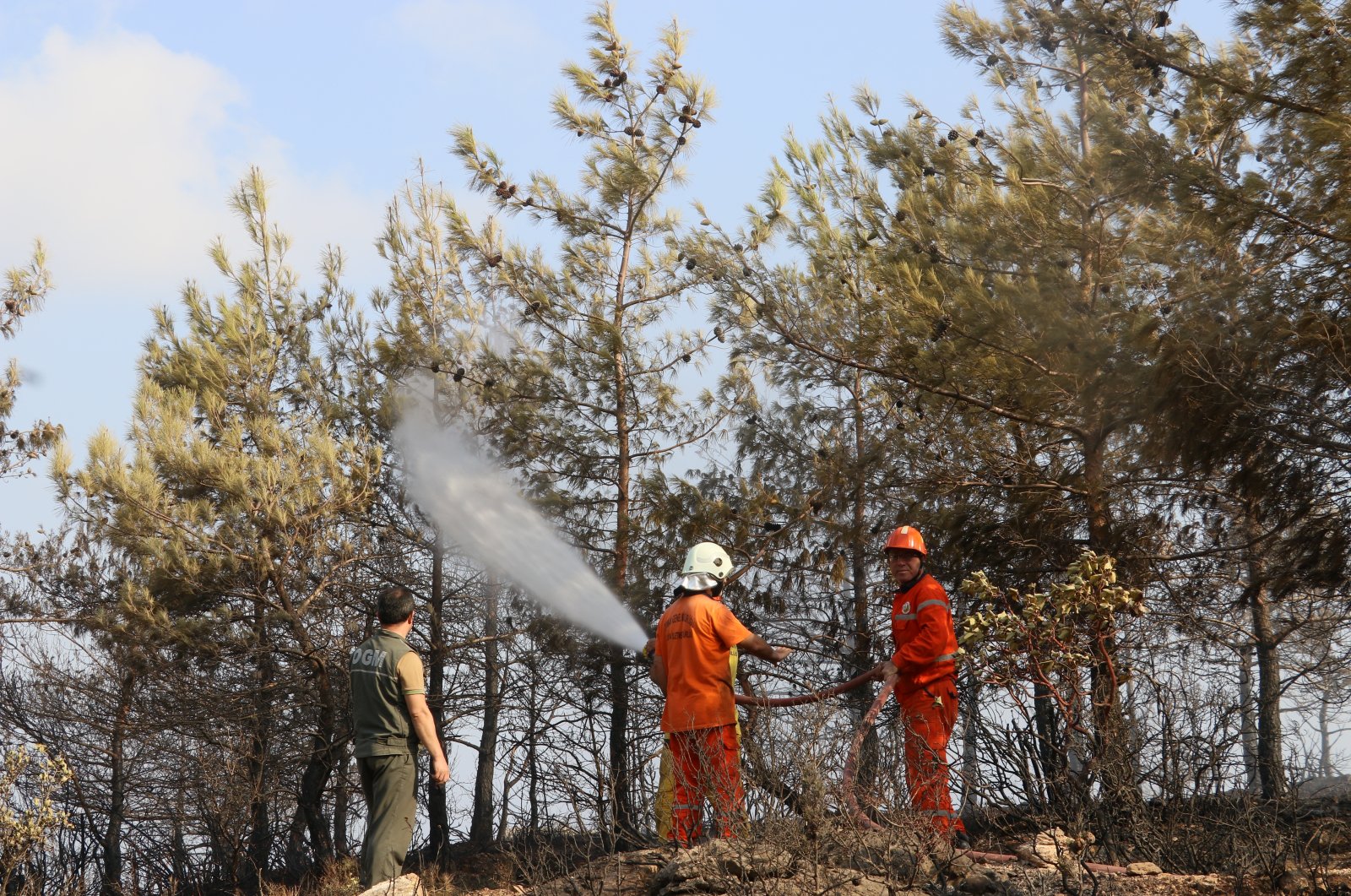 The PKK terror has manifested its hatred of nature once again, coming under the spotlight for perpetrating several forest fires in provinces around Turkey. The group has made a name for itself for once again with such heinous acts

Four provinces around Turkey fell victim to the PKK’s hatred of nature Saturday, with almost simultaneous fires destroying forests in various parts of the country.

Turkish authorities were quick to detain suspected arsonists who burned forestland in southern Hatay province’s Belen district, and it wasn’t long before a PKK-aligned terrorist group claimed responsibility for the attack.

The "Children of Fire Initiative” glorified the heinous attack on Turkey’s forests, praising the terrorists who initiated the fire.

The so-called "initiative" was responsible for many arsons in recent years, and the group is known for its close ties to the PKK terrorist group.

Efforts to extinguish the fire are ongoing, with sprinklers and crews deployed to the area.

On the same day, the terrorist group also perpetrated an arson in Turkey's northern Trabzon province, as well as in two other southern provinces, Kahramanmaraş and Osmaniye.

The Children of Fire Initiative only claimed the Hatay forest fire so far, but given that all the arsons were perpetrated nearly simultaneously, it wasn’t long before the Turkish public drew parallels between the incidents and accused the PKK terrorist group of starting the other fires. The PKK has carried out countless similar acts in its past.

The Children of Fire were also implicated by Turkish authorities in several earlier fires. However, the PKK is partly active in the Amanos (Nur) Mountains, stretching southward from the Taurus mountain range in Kahramanmaraş to the Osmaniye and Hatay provinces. To deny the terrorist group a safe passage route from war-torn Syria, Turkish security forces have been conducting regular operations in the region.

Meanwhile, PKK sympathizers took to social media and further manifested their hatred of forests with jokes making fun of the fire, in a collective effort of terror propaganda.

Sharing the links of PKK-linked websites Fırat News Agency (ANF) and Nuçe Ciwan’s articles that glorify the arsons, the group’s sympathizers continued to celebrate the damage dealt to the environment by the terrorists.

In 2019, the group also claimed responsibility for wildfires in Turkey's western, northwestern and southern provinces, declaring "fiery revenge" against the state.

In a written statement published on a pro-PKK website, the group took responsibly for starting 27 separate fires in western metropolitan cities between July 11 and Aug. 24, including in the western province of Izmir, which affected more than 500 hectares (1,235 acres) of forest in the Karabağlar, Menderes and Seferihisar districts.

The PKK-linked group says they have razed forests in western districts as an act of revenge, further claiming that they will continue to set fire to other green areas and lands "until a "free autonomous Kurdistan" is established.

The terrorist group is also known to have claimed responsibility for various incidents unrelated to the group as acts of sabotage and attacks. In July of last year, the PKK-affiliated ANF reported that a forest fire on the outskirts of Mount Aydos in Istanbul’s Pendik district was claimed by the "People's United Revenge Militia" group, which is a part of the "Peoples' United Revolution Movement" umbrella group of several illegal extreme left-wing terrorist groups – mainly backed by the PKK. However, the Istanbul Governorate had said in a statement that the investigation into the fire revealed that two children accidentally started the fire.

Nevertheless, another fire that broke out two months later in the same area was indeed perpetrated by a PKK-aligned militant, as proven by a Turkish court.

Some 4,865 square meters (52,366 square feet) of land burned in the wildfire that started in the Aydos Forest on Sept. 19, 2019. The investigation by security forces revealed that the fire was started by Yakup Akman on behalf of the PKK terror group.

The suspect convicted of starting a forest fire on the outskirts of Aydos hill in Istanbul’s Pendik district upon the orders of the PKK terror group was sentenced to life imprisonment in May.

Following the incident, a social media account affiliated with the PKK assumed responsibility for the fire. Arrested on Sept. 24, 2019, Akman admitted that he caused the fire upon the orders of the PKK.

The court sentenced Akman to life imprisonment on the charge of "disrupting the unity and territorial integrity of the state.” He was also sentenced to 25 years in prison on the charge of “burning a state forest as an act of an armed terrorist organization.”

Moreover, during Turkey's Operation Olive Branch in 2018, which was aimed at clearing the Syrian border city of Afrin of the PKK's Syrian affiliate YPG, fleeing members burned down hundreds of acres of forest land on the Amanos Mountains in the adjacent southern Turkish province of Hatay. PKK terrorists also burned forests in the Dörtyol district of Hatay and the Havran district of northwestern Balıkesir province.

In another case, three terrorists were arrested after they were identified as the perpetrators of a 2011 forest fire in the Foca district of the western province of Izmir.

In August, another incident took place, this time in northern Iraq, that proved the terrorist group’s hatred of the environment.

The terror group uses various tools to wrongfully accuse Turkish forces of destruction in the areas it has cleared in successful counterterrorism operations, said the sources, who asked not to be named due to restrictions on speaking to the media.

Turkey's Claw-Tiger and Claw-Eagle operations were launched in mid-June to ensure the safety of the Turkish people and borders by neutralizing the threat of the PKK and other terrorist groups, who often use northern Iraq to plan cross-border attacks.

Formed in 1978, the PKK, recognized as a terrorist group by Turkey, the United States and European Union, has been waging violent attacks against the state and citizens since 1984, during which nearly 40,000 people have been killed. In addition to suicide bombings, deadly ambushes and massacres against civilians, the PKK either claimed or was accused of starting many forest fires in the past.